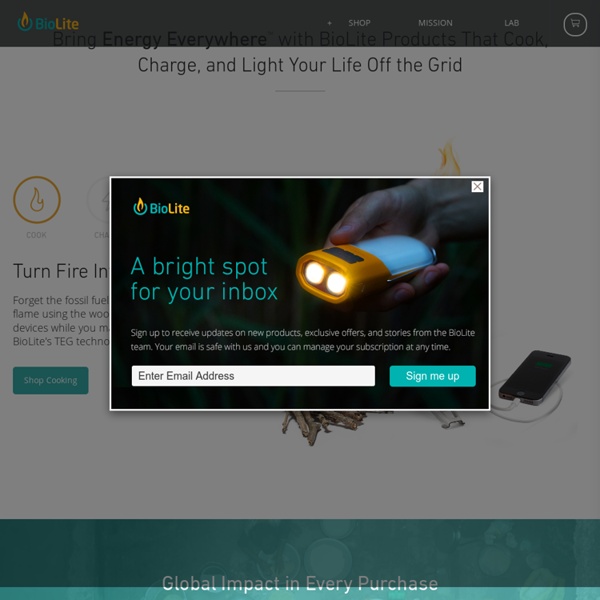 USB Power Adapter/Charger by Robogaia Industries , LLC The Project Power your USB devices like Phones, Raspberry Pi, Arduinos from a multitude of power sources like solar arays, cars, boats, batteries. Just plug in and use without any hassle. We provide 2 versions of the USB adapter that look the same have the same parts except one that has a different series.

HDR Time Lapse Camera - TLC200 Pro Time Lapse Video 1, 2, 3 ! 3 steps to create stunning HDR time lapse video. Excellent 4.2 um HDR sensor Batthead: A battery in charge by Vonkil Technologies Imagine the cool things you could do with a regular rechargeable battery that was controlled by your smartphone or tablet. We've developed an AA-sized NiMH battery with a Bluetooth® Smart chip inside that puts you in control of your gadgets. We call our invention the Batthead: a battery that puts you in charge. Ever wanted to silence a noisy toy when the phone rings?

Horn Loudspeaker - Avantgarde Acoustic™ Hornloudspeaker GMBH Avantgarde Acoustic™ speaker systems are the combination of a timeless idea and innovative technical solutions. The acoustical principal of the horn is our foundation, the transformation into modern and innovative products is our great challenge. What is it that makes our products so special and unprecedented?

PowerzALL - the fast, smart and powerful portable charger. by Lam Pham ABC 10 News SAN DIEGO: "One San Diego man's passion project could help you power up a lifeline in an emergency." The PowerzALL is a high-performance power adapter that transforms a power tool battery into a high-capacity portable charger. Each PowerzALL model is a compact unit containing a circuit board and a plastic housing that is specifically designed to fit several common types of batteries including the Dewalt DCB 20 Volt series and the Ryobi One 18 Volt series. PowerzALL Model #1, The PowerzALL D20 for the Dewalt 20 Volt battery line. The PowerzALL D20 model is designed to fit all Dewalt 20 Volt batteries including the DCB 200, DCB 201, DCB 203 and DCB 204.

QindredCam — Acumulus9 The QindredCam is a wearable camera that captures videos and photos for you. All you have to do is clip it on your shirt or wear it around your neck. The camera is 8 megapixel with a wide-angle lens. Genneo - Power Through Motion by Blake L Isaacs & Daniel Mota Veiga THANK YOU to everybody who has backed us so far! If you like this project but can't back it, you can still help us out tremendously by sharing this page with your friends on Facebook and Twitter. Or by talking about it. Genneo has created a revolutionary line of products that capture energy from walking, shaking or moving in other ways and turn it into charge for your phone and other portable electronics. These products are easy to carry and they capture energy as you move normally, storing that energy in their on-board battery.

SmartMat Special Offer Tell me a little more about the calibration phase. When you first unpack SmartMat, you need to go through a calibration process where you put in basic information (height, weight, gender, age). Next, you will lie down on SmartMat so it can determine your Ape Index (ratio/length of torso/arms vs. legs), which is important for calibration. Hydrobee Harvests Water Energy for USB Power to Go by Burt Hamner The idea for Hydrobee came naturally. The co-founders of Hydrobee SPC, Burt and Dane, first worked together at Hydrovolts, a company Burt founded in 2007 to make hydrokinetic turbines for big water systems like irrigation canals. Burt hired Dane as the industrial designer.

Product Introduction: Habitat: A Home Automation Platform that Only Requires Sensor Mounting Touted as "home automation for products you already own," Habitat is a Kickstarter-funded home automation platform built on the philosophy that installation should only be as difficult as mounting a battery-powered sensor on a wall. Currently, accessories in the Habitat device ecosystem include the Habitat Park garage door automation device, the Habitat Protect audio fire and carbon dioxide alarm monitoring device, and the Habitat Learn multifunctional sensor. The Habitat Hub integrates these devices for remote management on mobile devices via internet connectivity. • HABITAT PARK: A garage door opener dock that operates the opening mechanism by mechanical means, connected for remote management by mobile device via the Habitat Hub. Geofencing based on mobile device GPS permits automation of door control. • HABITAT PROTECT: An audio monitoring device that recognizes fire and carbon dioxide alarm noises, submitting an alert to remote mobile devices via the Habitat Hub.

The World's Thinnest Portable Mobile Charger by Jackery We kept hearing from smartphone and tablet users that they wanted a portable battery small enough to fit in their pockets but was also powerful, and could match with sleek good looks of their mobile devices. We listened to consumers and made the Jackery Air, the first premium, ultra-thin, lightweight, and mobile portable charger. Jackery Air is the thinnest portable charger for mobile devices in the world. Terrahawk’s M.U.S.T. Is A Mobile Guard Tower In A Shady-Looking Van National Security isn’t always about the flashy solutions. Not everything can be rail guns and one-winged drones. Sometimes you just need a sort of seedy-looking van that slowly, slowly turns into a climate-controlled guard tower. That, at least, is the goal of defense researcher Terrahawk’s M.U.S.T. platform. That’s Mobile Utility Surveillance Tower if you must know.

How to make a solar PAL kit - a new eco-guide for everyone ! by eco-solar About this project Risks and challenges As the hard bit is already done The only risks in completing the project on time are a delay in the reproducing/ printing process( should the project really take off) should this be the case I have other printer/ dvd reproduction firms in hand to complete this process successfully. Learn about accountability on Kickstarter Video: Kawasaki’s Power-Assist Robot Suit Helps Humans Lift Heavy Objects Japanese tech powerhouse Kawasaki is working on the so-called Power Assist Suit, a wearable robot that helps humans carry objects weighing 30-40kg without any effort from the muscles. The suit is actually one of quite a few similar models currently available in Japan. The Kawasaki robot features a total of four motors in the parts covering the hips and knees (see picture below). The control unit and lithium battery are placed in the part placed around the lower back. According to Kawasaki, the self-supporting robot is designed in a way that wearers don’t feel the weight of the suit itself when moving around. The Power Assist Suit can be adjusted to the length of the wearer’s legs and doesn’t take more than a minute to put on and off, Kawasaki promises.