Where is The Mind?: Science gets puzzled and almost admits a non-local mentalscape. 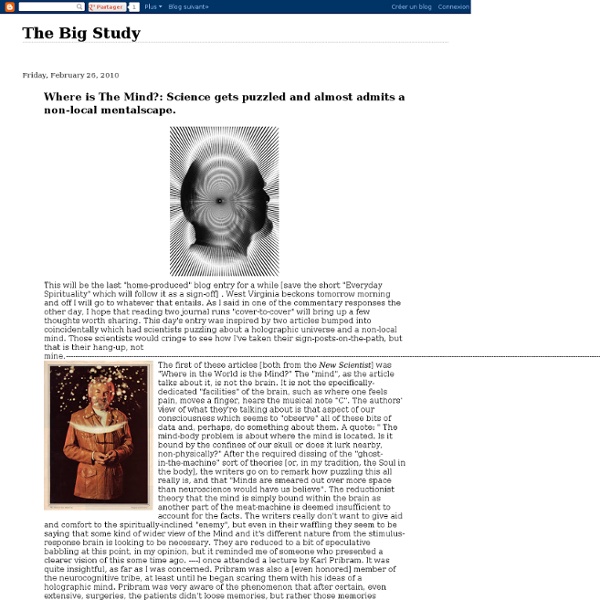 This will be the last "home-produced" blog entry for a while [save the short "Everyday Spirituality" which will follow it as a sign-off] . West Virginia beckons tomorrow morning and off I will go to whatever that entails. As I said in one of the commentary responses the other day, I hope that reading two journal runs "cover-to-cover" will bring up a few thoughts worth sharing. This day's entry was inspired by two articles bumped into coincidentally which had scientists puzzling about a holographic universe and a non-local mind. Those scientists would cringe to see how I've taken their sign-posts-on-the-path, but that is their hang-up, not mine. The first of these articles [both from the New Scientist] was "Where in the World is the Mind?" That brings in the second serendipitous article. It reminded me then, also, of a moment when I was able to spend a [too short] time with David Bohm, the famous theoretical physicist. Related:  Where's My Mind?

Physicists Say Consciousness Might Be a State of Matter — NOVA Next It’s not enough to have a brain. Consciousness—a hallmark of humans, mammals, birds, and even octopuses—is that mysterious force that makes all those neurons and synapses “tick” and merge into “you.” It’s what makes you alert and sensitive to your surroundings, and it’s what helps you see yourself as separate from everything else. So MIT’s Max Tegmark is championing a new way of explaining it: he believes that consciousness is a state of matter. Theoretical physicist Max Tegmark says that consciousness is a state of matter, undulating through phases of change based on surrounding mathematical conditions. By “matter,” he doesn’t mean that somewhere in the deep recesses of your brain is a small bundle of liquid, sloshing around and powering your sense of self and your awareness of the world. Most neuroscientists agonize over consciousness because it’s so difficult to explain. Tegmark calls his new state of matter “perceptronium.”

MindShift | How we will learn MindShift explores the future of learning in all its dimensions. We examine how learning is being impacted by technology, discoveries about how the brain works, poverty and inequities, social and emotional practices, assessments, digital games, design thinking and music, among many other topics. We look at how learning is evolving in the classroom and beyond.We also revisit old ideas that have come full circle in the era of the over scheduled child, such as unschooling, tinkering, playing in the woods, mindfulness, inquiry-based learning and student motivation. We report on shifts in how educators practice their craft as they apply innovative ideas to help students learn, while meeting the rigorous demands of their standards and curriculum. Contact the us by email.

8 Famous People Whose Creativity & Innovation Was Inspired By LSD Source: www.collective-evolution.com | Original Post Date: Growing up, I was conditioned to believe that LSD was one of the worse drugs, with its dangers and addictive properties following close behind those of heroin. This would all change when I fell severely ill in my twenties. After conventional medicine had failed me, I decided to embark on a journey with plant medicine. This eventually led to an interest in the healing properties of psychedelics, particularly psilocybin, which ultimately cured my depression. However, at the time I vowed never to explore LSD, as it was ‘synthetic’ and in my opinion could not be considered a natural medicine. So, imagine the surprise of those closest to me when I announced the inevitable –my interest in psychedelics finally piqued my interest in LSD. What I learned was that although LSD may not exactly be “natural,” when it opens the doors of perception, it simultaneously opens much more. Famous People Inspired by LSD 1. 2. 3. 4. 5. 6. 7. 8. Sources:

15 Years of Cutting-Edge Thinking on Understanding the Mind by Maria Popova What mirror neurons have to do with Abu Ghraib, the science of religion, and how happiness flourishes. For the past 15 years, literary-agent-turned-crusader-of-human-progress John Brockman has been a remarkable curator of curiosity, long before either “curator” or “curiosity” was a frivolously tossed around buzzword. His Edge.org has become an epicenter of bleeding-edge insight across science, technology and beyond, hosting conversations with some of our era’s greatest thinkers (and, once a year, asking them some big questions.) Last month marked the release of The Mind, the first volume in The Best of Edge Series, presenting eighteen provocative, landmark pieces — essays, interviews, transcribed talks — from the Edge archive. While there’s no doubt about the value of online presentations, the role of books, whether bound and printed or presented electronically, is still an invaluable way to present important ideas. Iconic neuroscientist V. What is the self?

Jung's Active Imagination The following atrticle is excerpted from Jung the Mystic, now available from Tarcher/Penguin. There was a method to Jung's madness: active imagination. It, along with the transcendent function, are the two most important discoveries Jung made in the years leading up to World War One. I would even argue that they were the most important discoveries of Jung's career, and that everything that came later had its roots in these two fundamental insights. This being so, they warrant a bit of attention. Strangely, Jung seems to have done everything he could to hide these discoveries from all but his closest colleagues. Some suggest Jung kept quiet about active imagination because he considered it possibly dangerous. What, then, is active imagination? More abstractly, it's a method of consciously entering into a dialogue with the unconscious, which triggers the transcendent function, a vital shift in consciousness, brought about through the union of the conscious and unconscious minds. Notes:

Is Your Mind Separate From Your Body? Premise #1: “The mind is in the body.” I teach a lot of courses and workshops on mind-body science, and Premise #1 is how I start all of them. It's a basic assumption of modern psychology, especially for those who study the brain . I define mind as the experience a person has of him or herself—thoughts, emotions, memories , desires, beliefs, sensations, even consciousness itself. For example, hormones circulating throughout the body shape our thoughts and emotions, from testosterone making us more competitive and self-focused to adrenaline making us anxious or energized. I don't find it alarming or depressing that rich psychological experiences may be rooted in the body, and observable physical processes. Of course, not everyone accepts this mind-body premise. But I'm intrigued by a new study on this issue that focuses not on which point of view is right, but how your beliefs about the mind-body relationship shapes other attitudes and actions. Studies cited: 1. 2.

How We Create Reality Al Smith, Contributing WriterWaking Times Do you wonder why life is a chaotic roller coaster of both positive and negative events? Have you, like most, earnestly tried positive thinking, meditation or prayer without any tangible beneficial results? Do you stress over your quietly desperate realization that you have little control over your own life? Do you fear that most of us are floating helplessly like plankton on the waves? After reading this a few times, you’ll understand the natural forces that create our individual and collective realities. We each wield enormous power throughout each day of our lives. Your subconscious mind is in continuous contact with the subconscious minds of everyone else alive today and possibly with all minds on other planes at all times throughout the universe. The collective subconscious does NOT understand “words” or language. Don’t confuse night dreams with daydreams. The duration of an image you host on your mental screen isn’t very significant.

Integrating the 16 Habits of Mind In outcomes-based learning environments, we generally see three elements in play: 1) learning objectives or targets are created from given standards; 2) instruction of some kind is given; and then 3) learning results are assessed. These assessments offer data to inform the revision of further planned instruction. Rinse and repeat. But lost in this clinical sequence are the Habits of Mind that (often predictably) lead to success or failure in the mastery of given standards. In fact, it is not in the standards or assessments, but rather these personal habits where success or failure -- in academic terms -- actually begin. Below are all 16 Habits of Mind, each with a tip, strategy or resource to understand and begin implementation in your classroom. The habits themselves aren't new at all, and significant work has already been done in the areas of these "thinking habits." And a renewed urgency for their integration. 1. 2. 3. 4. 5. Ask students to map out their own thinking process. 6. 7. 8.

Your brain does not process information and it is not a computer | Aeon Essays No matter how hard they try, brain scientists and cognitive psychologists will never find a copy of Beethoven’s 5th Symphony in the brain – or copies of words, pictures, grammatical rules or any other kinds of environmental stimuli. The human brain isn’t really empty, of course. But it does not contain most of the things people think it does – not even simple things such as ‘memories’. Our shoddy thinking about the brain has deep historical roots, but the invention of computers in the 1940s got us especially confused. To see how vacuous this idea is, consider the brains of babies. A healthy newborn is also equipped with more than a dozen reflexes – ready-made reactions to certain stimuli that are important for its survival. Senses, reflexes and learning mechanisms – this is what we start with, and it is quite a lot, when you think about it. We don’t store words or the rules that tell us how to manipulate them. Humans, on the other hand, do not – never did, never will.