How to Become A Social Badass 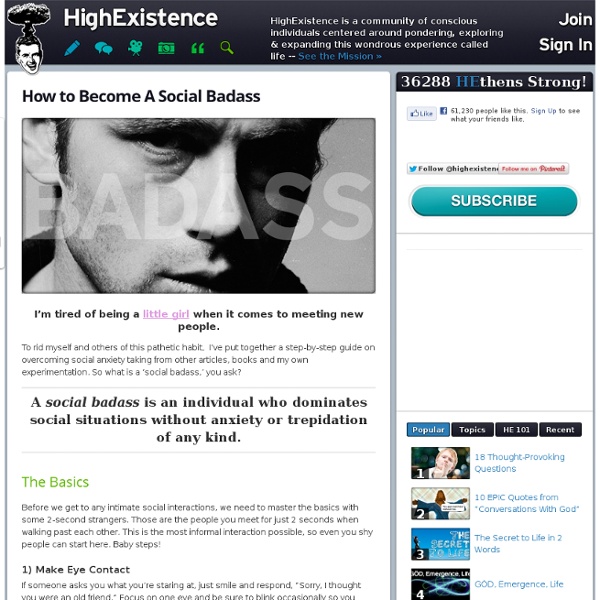 I’m tired of being a little girl when it comes to meeting new people. To rid myself and others of this pathetic habit, I’ve put together a step-by-step guide on overcoming social anxiety taking from other articles, books and my own experimentation. So what is a ‘social badass,’ you ask? A social badass is an individual who dominates social situations without anxiety or trepidation of any kind. The Basics Before we get to any intimate social interactions, we need to master the basics with some 2-second strangers. 1) Make Eye Contact If someone asks you what you’re staring at, just smile and respond, “Sorry, I thought you were an old friend.” 2) Say Hi When you’re comfortable making eye contact, throw in a quick ‘Hello’ with a smile. 3) Add a Greeting ‘Good morning/afternoon/evening’ usually does the trick. Warning: Some people will completely ignore you and not respond, but don’t be discouraged. Social Badass Challenges Make Yourself a Spectacle You get the idea. Take on a Persona Anchoring

Related:  dont be messing with my mind

Wake the F**k Up! This is a wake up call for anyone that is not living the life they want to live. It will be dogmatic and heated, but nonetheless full of truth. I apologize if this shocks you into a state of discontent with your current lifestyle (that’s the intention). First, take a look at the road map below: Where did you end up? Actually I don’t care because I don’t think you thought nearly enough about whether or not you are happy.

What is your body language saying? Narrowing the red margins of your lips is a clear sign of anger, while massaging your forehead can signal uneasiness. Brushing hair off your face is a combination of nerves and flirtationIf you nod in clusters of three, the speaker will sense your interestStuffing your hands in your pockets means you're probably hiding somethingIn a seated conversation, lifting your toes means your feelings are extra-positive (RealSimple.com) -- Every last gesture -- whether it's a tilt of the head or plain fidgeting -- tells a story. Do you look down when you speak? Play with your hair?

Dalai Lama tells his Facebook friends that religion "is no longer adequate" Well, he'd hardly be the first Buddhist to say something like this. From what I've read, there are already lots of Buddhists, and historical Buddhist movements in various countries, who are atheistic and who prefer to return to Buddhism's roots as a kind of self-help, personal psychological and philosophical system—and yes, I realize I'm hugely oversimplifying that ideological stripe of Buddhism—and that's fine. And if this helps the world be a better place, cool. I'm all for it. But as an atheist I had already got to this point without making sand paintings, spinning prayer wheels or staring at stupas or rock gardens to shut off all mental processes and get to Satori.

Pediatric Care Online : Chapter 31: Violence Prevention Robert D. Sege, MD, PhD Most peer violence in the United States results from conflicts among friends, acquaintances, or intimate partners. Alternate Sleep Cycles Most people only think that there is one way to sleep: Go to sleep at night for 6-8 hours, wake up in the morning, stay awake for 16-18 hours and then repeat. Actually, that is called a monophasic sleep cycle, which is only 1 of 5 major sleep cycles that have been used successfully throughout history. The other 4 are considered polyphasic sleep cycles due to the multiple number of naps they require each day. How is this possible?

Social Skills Training Made Easy by Peter Murphy Just as no one learns to ride a bicycle without first beingtrained to ride a bicycle, so too does no one truly acquiresocial skills without undergoing some kind of social skillstraining. While it’s not always easy to define what is meant bysocial skills, it’s easy to identify individuals who lackthem and need social skills training: they tend to besocially isolated, frustrated, depressed, even prone toanger and acting out. Social skills training for both children and adults focuseson creating individuals who are able to make and maintainfriendships, understand and express emotion, workcooperatively, and develop assertiveness and self-worth. Barlaam and Josaphat A Christian depiction of Josaphat, 12th Century manuscript Balauhar and Budasaf or Bilawhar wa-Yudasaf is a legendary Islamic telling of the story of Siddhartha Gautama originating in the Sogdian language (Middle Iranian).[1] The tale came into Christianity as the story of Sts. Barlaam and Josaphat, who were venerated in both the Eastern and Western churches. Buddhist original[edit] It was ultimately derived, through a variety of intermediate versions (Arabic and Georgian), from the life story of the Buddha.[2][3] Wilfred Cantwell Smith (1981)[4] traced the story from a 2nd to 4th century Sanskrit Mahayana Buddhist text, to a Manichee version, which then found its way into Muslim culture as the Arabic Kitab Bilawhar wa-Yudasaf (Book of Bilawhar and Yudasaf), which was current in Baghdad in the 8th century. Islamic version[edit]

Related:
Related:  dont be messing with my mind   -  Lumosity Brain Training: Challenge & Improve Your Mind   -  7 Skills To Become Super Smart | Super Scholar   -  Zap of electricity makes you a brighter spark - Telegraph   -  Math Run - Mathgame - how fast are your Math skills? A simple Math Training Game for everyone   -  Reinventing Brain Health: Market Research at the Frontier of Digital Innovation & Neuroplasticity   -  Oscillatory Thoughts: The neuroscientific study of hallucinogens   -  Embodied Cognition [Internet Encyclopedia of Philosophy]   -  Out of Our Brains - NYTimes.com - NYTimes.com   -  The Extended Mind   -  10 Websites With Fun Tests To Gauge Your IQ   -  The Big Study: Where is The Mind?: Science gets puzzled and almost admits a non-local mentalscape.   -  Imaginary Foundation   -  Drunkest Guy Ever Goes for More Beer Video - Video   -  Etymology of Neuroscience Terms   -  Think faster focus better and remember moreRewiring our brain to stay younger... - YouTube   -  Psst! The Human Brain Is Wired For Gossip : NPR   -  Religion May Cause Brain Atrophy -- Science of the Spirit -- Sott.net   -  Neuroscience of free will   -  The Brain: How The Brain Rewires Itself - TIME   -  Me, Myself and My Stranger: Understanding the Neuroscience of Selfhood - Scientific American