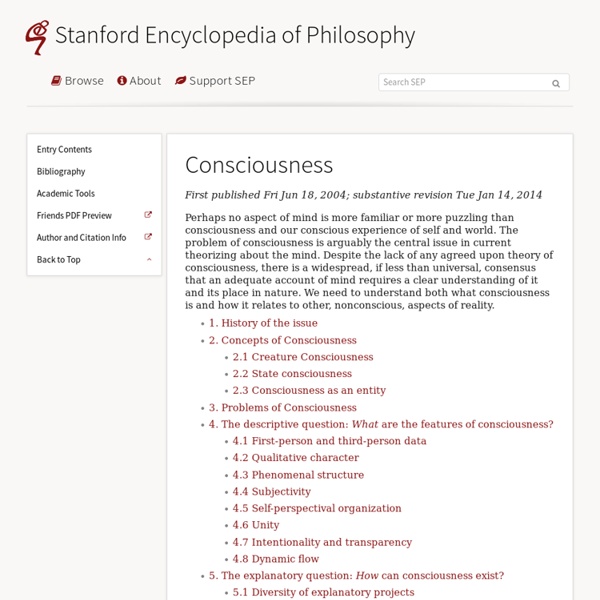 1. History of the issue Questions about the nature of conscious awareness have likely been asked for as long as there have been humans. Neolithic burial practices appear to express spiritual beliefs and provide early evidence for at least minimally reflective thought about the nature of human consciousness (Pearson 1999, Clark and Riel-Salvatore 2001). Preliterate cultures have similarly been found invariably to embrace some form of spiritual or at least animist view that indicates a degree of reflection about the nature of conscious awareness. Nonetheless, some have argued that consciousness as we know it today is a relatively recent historical development that arose sometime after the Homeric era (Jaynes 1974). Although the words “conscious” and “conscience” are used quite differently today, it is likely that the Reformation emphasis on the latter as an inner source of truth played some role in the inward turn so characteristic of the modern reflective view of self. 2. Sentience. 3.

Consciousness Representation of consciousness from the seventeenth century by Robert Fludd, an English Paracelsian physician Inter-disciplinary perspectives[edit] Recently, consciousness has also become a significant topic of interdisciplinary research in cognitive science, involving fields such as psychology, linguistics, anthropology,[11] neuropsychology and neuroscience. Consciousness Representation of consciousness from the seventeenth century At one time consciousness was viewed with skepticism by many scientists, but in recent years it has become a significant topic of research in psychology, neuropsychology and neuroscience. The primary focus is on understanding what it means biologically and psychologically for information to be present in consciousness—that is, on determining the neural and psychological correlates of consciousness. The majority of experimental studies assess consciousness by asking human subjects for a verbal report of their experiences (e.g., "tell me if you notice anything when I do this"). Issues of interest include phenomena such as subliminal perception, blindsight, denial of impairment, and altered states of consciousness produced by drugs and alcohol, or spiritual or meditative techniques.

Hard problem of consciousness The existence of a "hard problem" is controversial and has been disputed by some philosophers.[4][5] Providing an answer to this question could lie in understanding the roles that physical processes play in creating consciousness and the extent to which these processes create our subjective qualities of experience.[3] Several questions about consciousness must be resolved in order to acquire a full understanding of it. These questions include, but are not limited to, whether being conscious could be wholly described in physical terms, such as the aggregation of neural processes in the brain. If consciousness cannot be explained exclusively by physical events, it must transcend the capabilities of physical systems and require an explanation of nonphysical means.

in Chapter 06: Memory Psychology: An Introduction Table of Contents Next page Copyright© 2007-2011Russ Dewey Part One: From Ebbinghaus to Encoding Part Two: Different Types of Memory Part Three: Biological Perspectives on Memory Love Will Change Your Life There are higher vibrations as joy, peace, and empowerment based in love and light in the highest vibrations. Negative thinking offers lower emotions and positive ideas produce higher emotions. Are you ready to move into enjoying your life? This awakening offers the idea that fears should not control your life. Choosing to replace fear with love is a viable solution. Will releasing old energy of negativity from the past, to be replaced by a rising energy of love, create a new paradigm?

in Chapter 03: States of Consciousness Psychology: An Introduction Table of Contents Next page Copyright© 2007-2011Russ Dewey Part One: Consciousness Part Two: Sleep Part Three: Hypnosis A voyage through the multiverse and higher dimensional hyperspac "Remarkable claims require remarkable proof." -- Carl Sagan The "multiverse" idea—once thought to be so crazy it only belonged on late night television—has now become the dominant theory in all of cosmology. The idea now dominates conversations in science circles and it seems you cannot avoid the theory of the multiverse. Einstein first gave us the idea that the universe is a soap bubble of some sort and we reside on the skin of this expanding bubble. This observation of an expanding bubble is now one of the greatest experimental achievements of the last century.

Intuition pump In the case of the Chinese Room argument, Dennett argues that the intuitive notion that a person manipulating symbols seems inadequate to constitute any form of consciousness ignores the requirements of memory, recall, emotion, world knowledge and rationality that the system would actually need to pass such a test. "Searle does not deny that programs can have all this structure, of course," Dennett says.[2] "He simply discourages us from attending to it. But if we are to do a good job imagining the case, we are not only entitled but obliged to imagine that the program Searle is hand-simulating has all this structure — and more, if only we can imagine it. But then it is no longer obvious, I trust, that there is no genuine understanding of the joke going on." A popular strategy in philosophy is to construct a certain sort of thought experiment I call an intuition pump [...].

Freud's Conscious and Unconscious Mind By Kendra Cherry Updated December 17, 2015. Psychoanalyst Sigmund Freud believed that behavior and personality derives from the constant and unique interaction of conflicting psychological forces that operate at three different levels of awareness: the preconscious, the conscious, and the unconscious. What do these terms mean? How does consciousness work A couple of days ago I was reminded that there was another big question to be answered. The first big question is scattered throughout this blog. It boils down to a theory of everything. I am leaning towards M-Theory. This of course is not based on any scientific or mathematic knowledge of mine.