In the Shadow of Hegel: How Does Thought Arise Out of Matter? 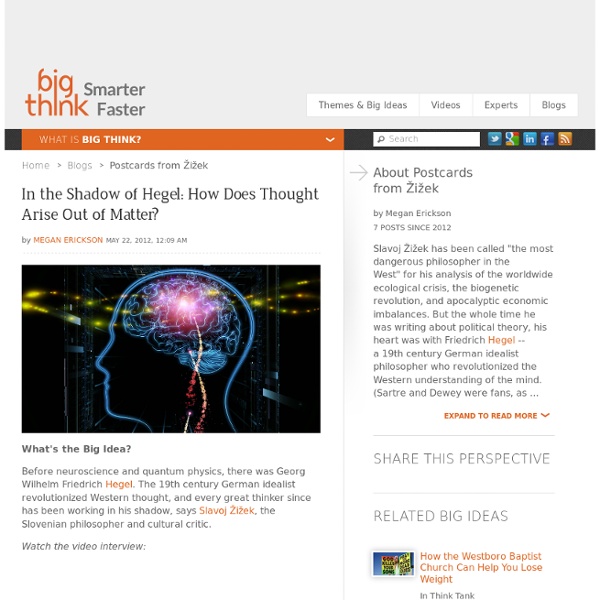 What's the Big Idea? Before neuroscience and quantum physics, there was Georg Wilhelm Friedrich Hegel. The 19th century German idealist revolutionized Western thought, and every great thinker since has been working in his shadow, says Slavoj Žižek, the Slovenian philosopher and cultural critic. Watch the video interview: Often seen as a precursor to Marxists and existentialists, Hegel believed that knowledge is not static, but dynamic. But what does it mean in a world where cognitive scientists can see brain function on an fMRI scan, capture the visual data, and reassemble it into videos using quantitative modeling? What's the Significance? Reductionists like Stephen Hawking may give the impression that contemporary science is uniquely capable of answering the big questions, like Does the world have an end? Which is why he's calling for the rehabilitation of classical philosophy: for contemporary philosophers to engage with the work of scientists and vice versa. Related:  Neuroscience & Consciousness

Exploring the Superconscious Interview with Dr Edward Bynum, author of Dark Light Consciousness Author: Jair Robles We are all familiar with its symbolic representations, be it from the caduceus used by modern medicine, the winged serpent of Prehispanic Mesoamerican cultures or the dragons commonly seen at most Asian celebrations. It is refreshing and exciting to find that current scientists and scholars, such as Dr Edward Bynum, are making an effort to bring this knowledge back for the scrutiny and study of modern science. Dr Edward Bruce Bynum is a clinical psychologist and director of behavioral medicine at the University of Massachusetts Health Services in Amherst. SuperConsciousness recently spoke with Dr Edward Bynum about his most recent book and the empirical evidence he has observed based on his practice of Yoga for more than thirty years and how, through the process of raising the Ureaus, we can intentionally direct our own spiritual evolution. So those are the roots of my search as a seeker.

Touring the brain Evolution has created a staggering range of organisms, each with features cleverly honed for its environmental niche. But while evolution is a fantastic creator, adding almost whatever is needed, it is surprisingly lazy at tidying up after itself, at pruning what is no longer required. In the bacterial world, where margins for survival may be razor sharp, things are more efficient. But most animals carry with them a surplus of obsolete features, such as the astronomical quantities of pathological DNA interlopers that sit in every cell in our bodies. But there are also more large-scale examples of detritus we endure. The human brain is in some ways an even more extreme example of a process that is far more creative than destructive. At the center of our brains, too, lies the oldest part, mainly involving the brain stem. Because the brain stem is such a critical part of our brains, any damage to it due to stroke, tumor, or some accident is usually extremely serious.

untitled Introduction Robert Monroe developed and patented a binaural-beat technology called the Hemi-Sync auditory-guidance system. The Monroe Institute, a 501c(3) nonprofit research and educational organization, uses this Hemi-Sync system within an educational process. During this process individuals listen to a combination of multiplexed audio binaural beats that are mixed with music, pink sound, and/or the natural sound of surf. Ancient cultures used the natural power of sound and music to safely influence states of consciousness in religious ceremonies and to promote psychological and physical health. Hemi-Sync has also proven effective in producing enriched learning environments, enhanced memory (Kennerly 1994), improved creativity (Hiew 1995), increased intuition, improved reliability in remote viewing [3] (McMoneagle 1993), telepathy [4], and out-of-body experience [5]. Binaural Beats and The Physiology of the Brain Binaural beats were discovered in 1839 by a German experimenter, H.

Can We Learn To Forget Our Memories? : Shots - Health Blog hide captionResearch shows that under certain circumstances, we can train ourselves to forget details about particular memories. iStockphoto.com Around 10 years ago, Malcolm MacLeod got interested in forgetting. For most people, the tendency to forget is something we spend our time cursing. Where are my keys? That time in fourth grade when you walked down the hall with your skirt tucked into the back of your underwear, if you sat down and practiced forgetting, could you erase it? Certainly there were people who competed in memory competitions who practiced techniques for remembering and were wildly successful. Still, they were curious. Blocking Memories With Practice MacLeod and Noreen weren't the first to experiment with intentional forgetting. And so MacLeod and Noreen took this technique as a starting point and invited a series of people into their lab. MacLeod and Noreen showed the subjects 16 of the 24 words over and over and over. 'A Significant Forgetting Effect'

Does Self-Awareness Require a Complex Brain? | Brainwaves (Image by David R. Ingham, via Wikimedia Commons) The computer, smartphone or other electronic device on which you are reading this article has a rudimentary brain—kind of.* It has highly organized electrical circuits that store information and behave in specific, predictable ways, just like the interconnected cells in your brain. On the most fundamental level, electrical circuits and neurons are made of the same stuff—atoms and their constituent elementary particles—but whereas the human brain is conscious, manmade gadgets do not know they exist. Humans are more than just conscious—they are also self-aware. Numerous neuroimaging studies have suggested that thinking about ourselves, recognizing images of ourselves and reflecting on our thoughts and feelings—that is, different forms self-awareness—all involve the cerebral cortex, the outermost, intricately wrinkled part of the brain. Philippi and Rudrauf also showed Roger photographs of himself, of people he knew and of strangers.

Scientists Claim That Quantum Theory Proves Consciousness Moves To Another Universe At Death | - Obscure Vision A book titled “Biocentrism: How Life and Consciousness Are the Keys to Understanding the Nature of the Universe“ has stirred up the Internet, because it contained a notion that life does not end when the body dies, and it can last forever. The author of this publication, scientist Dr. Robert Lanza who was voted the 3rd most important scientist alive by the NY Times, has no doubts that this is possible. Beyond time and space Lanza is an expert in regenerative medicine and scientific director of Advanced Cell Technology Company. Before he has been known for his extensive research which dealt with stem cells, he was also famous for several successful experiments on cloning endangered animal species. But not so long ago, the scientist became involved with physics, quantum mechanics and astrophysics. Lanza points to the structure of the universe itself, and that the laws, forces, and constants of the universe appear to be fine-tuned for life, implying intelligence existed prior to matter. Soul

From Sci-Fi to Sci-Fact: The New Frontier of Neuroscience | Dr. Alfredo Quinones-Hinojosa With rendition switcher Question: What is the most exciting part of brain science for you? Alfredo Quinones-Hinojosa: I think the most exciting part of what I do right now is exactly the fact that what we are doing is giving patients new hope; that we're looking at a disease, which is brain cancer, that people have looked at for hundreds of years and we have not been able to understand, and we're finally perhaps beginning to scratch the surface, we're beginning to look at an old disease with new eyes. And what new eyes are those is the fact that within brain cancer there may be a small population of cells that have the ability to recreate the same type of cancer, which means that despite the fact that we can actually do a perfect surgical resection and we can take a lot of these tumors out, these patients eventually continue to progress, perhaps because we're leaving those small little cells back there that are able to recreate the whole tumor. Recorded on: July 2, 2008

Sugar Harms Your Brain Health, Drives Alzheimer’s Epidemic By Dr. Joseph Mercola Guest Writer for Wake Up World Alzheimer’s disease, a severe form of dementia, affects an estimated 5.2 million Americans, according to 2013 statistics.[1] One in nine seniors over the age of 65 has Alzheimer’s, and the disease is now thought to be the third leading cause of death in the US, right behind heart disease and cancer. A growing body of research suggests there’s a powerful connection between your diet and your risk of developing Alzheimer’s disease, via similar pathways that cause type 2 diabetes. Contrary to popular belief, your brain does not require glucose, and actually functions better burning alternative fuels, especially ketones, which your body makes in response to digesting healthy fats. According to some experts, such as Dr. Sugar Damages Brain Structure and Function In your brain, insulin helps with neuron glucose-uptake and the regulation of neurotransmitters, such as acetylcholine, which are crucial for memory and learning. Neurologist Dr.

Brain Bugs: Hallucinations, Forgotten Faces, and Other Cognitive Quirks | Think Tank What's the Big Idea? If seeing is believing, then how do we come to know? One common misperception holds that vision springs directly from the eyes. True, the eyes, ears, and skin bombard us with a constant stream of information. As neuroscientist V.S. What's the Significance? For neurologists like Ramachandran, "the question of how neurons encode meaning and evoke all the semantic associations of an object is the holy grail of neuroscience, whether you are studying memory, perception, art, or consciousness." This is because brain damage is highly specialized. John developed a blood clot in a vein in his leg, which traveled to his cerebral arteries, causing a stroke. There was nothing wrong with his vision or hearing. In John's case, the "wire between the vision and the amagydala," which regulates emotion, had been cut. It's as if each of us is hallucinating all the time and what we call perception involves merely selecting the one hallucination that best matches the current input.

What Does It Mean When You Dream About Snakes? When you dream about snakes, chances are that the meaning of what you just dreamed about is related to challenging issues and feelings that you’re facing in your daily life. Related Ads To Inspire Dreams According to Freud’s classic dream interpretation theory, a snake featured in a dream represents a phallic symbol that could relate to a male figure, male energy or how you experience your sexuality. Interpreting what your dream about snakes means does not stop there however. What Does it Mean to Dream about Snakes? To get start interpreting what dreaming about snakes means, here are the most common meanings associated with snakes in dreams: Generally, a snake featured in a dream means that you’re dealing with a difficult situation or unsettling emotions in your waking life. Dream Interpretation Tools <A HREF=" The What people say about this book: “Tony Crisp, a dream therapist, shares with you his knowledge based on 22 years of research.