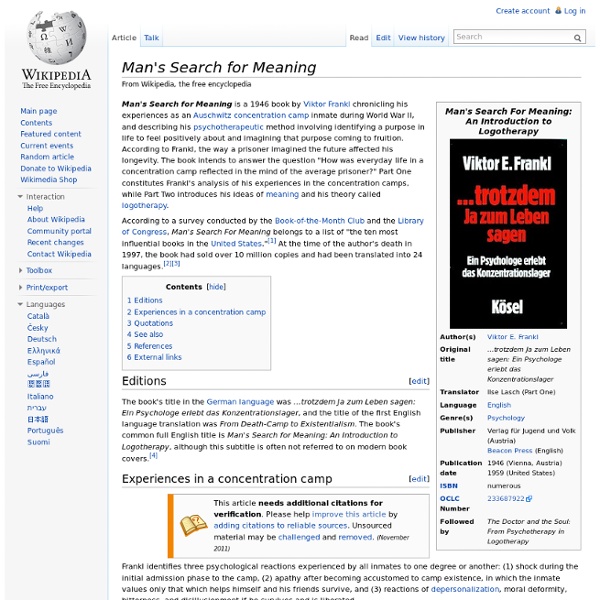 According to a survey conducted by the Book-of-the-Month Club and the Library of Congress, Man's Search For Meaning belongs to a list of "the ten most influential books in the United States."[1] At the time of the author's death in 1997, the book had sold over 10 million copies and had been translated into 24 languages.[2][3] Editions[edit] The book's title in the German language was ...trotzdem Ja zum Leben sagen: Ein Psychologe erlebt das Konzentrationslager, and the title of the first English language translation was From Death-Camp to Existentialism. Experiences in a concentration camp[edit] Frankl concludes that the meaning of life is found in every moment of living; life never ceases to have meaning, even in suffering and death. An example of Frankl's idea of finding meaning in the midst of extreme suffering is found in his account of an experience he had while working in the harsh conditions of the Auschwitz concentration camp: ... Quotations[edit] See also[edit] References[edit] Related:  Books

15 Books to Add to Your 2014 Reading List Year-end book lists can sometimes seem like a giant homework assignment you totally forgot about until the week before finals. You meant to read the one that your friend recommended, or the other after your favorite author tweeted about it, but you never had the chance. Try not to think of this 2013's literary wrap-up as something you didn't finish this year. Image: Peter Macdiarmid/Getty Images Molly Horan Molly Horan was an editorial intern at Mashable.

Teaching “The Odyssey” at San Quentin The opening of “The Odyssey” describes Odysseus as polytropos, a man “much turned” and “much turning.” He makes much happen, and much happens to him. When I selected “The Odyssey” as the first text for my English 101 course at San Quentin Prison, I worried about the choice. The theme of the course was life as a story, and at the first class, I asked them to tell a story from their own lives. When we first see Odysseus, he is gazing across the sea, weeping for home. Their points of resonance with Odysseus were many. Plotting against the suitors occupying his palace, Odysseus lies awake in doubt, reminding himself, “Bear up, old heart.” They recognized the undisciplined ego from which Odysseus proclaims his identity to the Cyclopes, thus inviting the wrath of Poseidon. Homer never tires of reminding us that when Agamemnon returned home, his wife had betrayed him and conspired in his murder, the better for the reader to appreciate the loyalty of Penelope.

The ThinkProgress Year In Culture: The Best -- And Worst -- Books Of 2013 By Alyssa Rosenberg "The ThinkProgress Year In Culture: The Best — And Worst — Books Of 2013" One of the greatest things about being a critic, particularly one who writes about all kinds of media, is just how many good books, television, movies, and music come into the world every year. Lightning Rod: Lean In, Sheryl Sandberg and Nell Scovell: It’s entirely possible to concede every single critique of Lean In–that it’s irrelevant to working-class women, that it ignores the disparate importance of women of color and LGBT women, that it buys into a corporatized feminism that cheers developments like the appointments of GM’s first female CEO while failing to challenge our assumptions about work–and still think it’s a good thing to have more career advice books aimed at women. Most Revealing Non-Fiction: The Skies Belong To Us, By Brendan I. Big Novel: The Flamethrowers, By Rachel Kushner: Kushner’s novel has been the subject of a kerfuffle over sexism and literary criticism.

Top 10 Classic Books Which May Change Your Life - List Ogre Not all books are created equal, so without further ado here are 10 books which may significantly alter your perception of life. The best Vonnegut book is usually considered to be Slaughterhouse-Five. I agree, but Cat’s Cradle makes you ask all the right questions, like how absurdly powerful weapons today have become, the problems of religion, human stupidity, the futility of everything in the end and so it goes. The story is about a guy named Jonah who is planning on writing a book about Dr. Zen and the Art of Motorcycle Maintenance This is one of the best philosophy books I have ever read. It’s a book which after reading it you will feel the need to not only try to improve your life but also enjoy it more in general; not many books can claim to do the same. Cosmos by Carl Sagan is one of those books which everyone should read at least once. One Hundred Years of Solitude Its another philosophy book, hidden inside a normal story. Meditations, by Marcus Aurelius

19 Quirky Conundrums Only Book Lovers Understand An avid reader is one of the best things a person can be. Not only does reading literature enhance your brain's connectivity (because, science!), it also allows you to experience other cultures, and avoid making embarrassing grammatical errors. There are, however, a handful of irksome situations that book lovers have to face. 1. 2. 3. 4. 5. 6. 7. 8. 9. 10. 11. 12. 13. 14. 15. 16. 17. 18. 19. 13 must-read business books in 2014 - Quartz In December, I wrote about a dozen exciting business books that debut this year. In the past three months, readers have asked what’s coming next. After reading a series of gems, and hearing the buzz about others, here are the spring and summer arrivals that I’m eagerly awaiting: 1. Most people believe that great leaders, innovators, entrepreneurs, and activists are distinguished by their ability to give compelling answers. 2. He had an Ivy League degree and a coveted consulting job at Bain, but something was missing from Adam Braun’s life. 3. The revered author who brought us Moneyball, Liar’s Poker, The Big Short, and The Blind Side has turned his sights back on Wall Street. 4. This book captures a tectonic shift in the global economy that has local consequences for all of us. 5. This book holds the keys to solving one of the great puzzles of life: how can we do less but accomplish more? 6. It’s one thing to appreciate a powerful speech. 7. 8. 9. 10. 11. 12. 13.

Mad Men college class: Professor teaches an entire course only about the show. Mad Med photos courtesy of AMC. Blackboard by Zhudifeng/Thinkstock. If you were an incoming freshman at my college this fall, you had dozens of courses available to usher you into the life of the mind. I don’t doubt that some of my students viewed the class as an easy A before arriving on the first day. People are always amazed that you can teach an entire course on a television show. Each student signed up for a Netflix account; before each class, they’d watch between two to five episodes assigned by me. Those assignments shouldn’t be all that surprising; some, such as Meditations in an Emergency, even served as focal points within the various episodes. All but two of my students entered as nonfans: In my experience, college students like to watch things that help them wind down after a night of studying (The Mindy Project, Archer, and Scandal are current favorites) not ponderous 42-minute quasi-existential contemplations on American identity.

Bragging Rights : Great Lit Perfect for Summer Reading | KQED Arts When we think of summer books, we think of the lightweight fare found at the airport or disposable paperbacks read and left behind at the vacation rental. Lurid titles with lurid covers — artfully hidden behind unread copies of The New Yorker — are guiltily consumed like deep fried Twinkies in the summer heat, which is how it is supposed to be. After all, sun, sand and distractions of all sorts surround you. But there are plenty of books that will grip your brain and make your modest investment in Costco sunglass readers well worthwhile. Kate AtkinsonLife After Life Kate Atkinson is best known for her brainy, broody Jackson Brodie mysteries, but her latest uses a time-loop motif to explore the life of Ursula Todd, born and re-born shortly before the first World War in a rural English manor house. Life After Life is one of those big books that reads like lightning, thanks to Atkinson’s invisible prose and her supple use of the toolkit of fantastic time-travel fiction. James Joyce? Related

37 Books Every Creative Person Should Be Reading Losing My Virginity: How I Survived, Had Fun, and Made a Fortune Doing Business My Way: Richard Branson: 9780307720740: Amazon.com: Books 13 Short Stories With Unexpectedly Shocking Twists There are short stories, and then there are short stories that shake you to the core. It could be the ending, or a twist halfway through, or just the entire story that makes you go "WTF?!" from start to finish. There are last lines that change the meaning of the entire story. Dive into this list if you want to give your brain (and your pulse) a workout. Show As Gallery Want more great book recommendations from Mashable? BONUS: Authors in Conversation with MashableReads