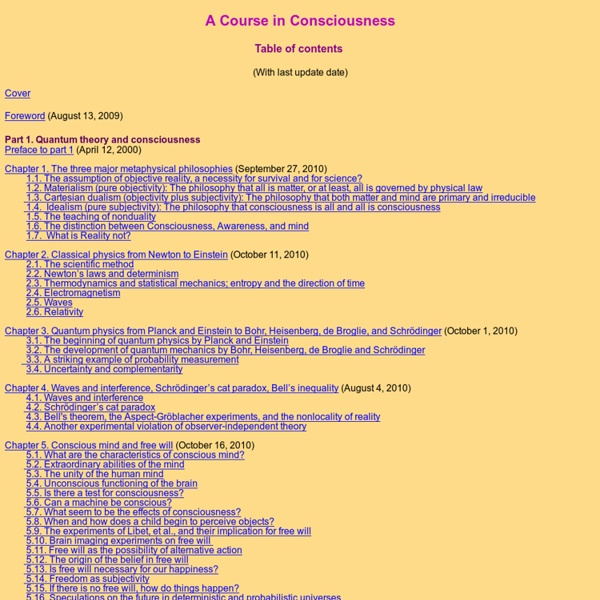 Mind as Separate Self - Atma Nadi Shakti Yoga and Klick Klack a Beezone Study of Adi Da Samraj 's Teaching Word Beezone Study Adapted and edited from various talks and writings of Adi Da Samraj The Separate "self" Does Not Exist - Except in Mind Atma Nadi Shakti Yoga "The individual separate self, sense or ego is a reflection...which is mind or the differentiating power, realized by experience..." Invisible Man - Adi Da Samraj 1975 How To Draw "How to Draw" is a collection of tutorials that will teach you everything from perspective basics to shading chrome. Never picked up a pencil before? Fear not! From simple line drawings to modern art and easy animations, we've got you covered. All projects come from Instructables.com and contain pictures for each step so you can start your masterpiece today! Instructables is the most popular project-sharing community on the Internet.

Level 3 of Consciousness by Richard Brodie Meme Central Books Level 3 Resources Richard Brodie Virus of the Mind What’s New? Site Map Level 3 of Consciousness You are reading about something that most people don’t even know exists. If you told them, they wouldn’t just not believe you—they would have no clue what you were talking about. The Battle for Your Mind: Brainwashing Techniques Being Used On The Public By Dick Sutphen Authoritarian followers Mind Control Subliminals By Dick Sutphen Summary of Contents The Birth of Conversion The Three Brain Phases How Revivalist Preachers Work Voice Roll Technique Six Conversion Techniques 1. keeping agreements 2.physical and mental fatigue 3. increase the tension 4. Uncertainty. 5.

The far future of humans and intelligence in the universe — episodes with Ray Kurzweil Closer to Truth | Ray is a world-renowned inventor, computer scientist, innovative futurist and best-selling author. He founded four technology companies based on his revolutionary inventions in artificial intelligence, including reading machines for the blind, speech recognition, and music synthesis. Ray was the principal developer of the first omni-font optical character recognition, the first print-to-speech reading machine for the blind, the first CCD flat-bed scanner, the first text-to-speech synthesizer, the first music synthesizer capable of recreating the grand piano and other orchestral instruments, and the first commercially marketed large vocabulary speech recognition. He has successfully founded, developed, and sold four AI businesses in OCR, music synthesis, speech recognition, and reading technology.

Allegory of the Cave Plato realizes that the general run of humankind can think, and speak, etc., without (so far as they acknowledge) any awareness of his realm of Forms. The allegory of the cave is supposed to explain this. In the allegory, Plato likens people untutored in the Theory of Forms to prisoners chained in a cave, unable to turn their heads. All they can see is the wall of the cave. Behind them burns a fire. Between the fire and the prisoners there is a parapet, along which puppeteers can walk. The Digital Public Library of America, Me, and You Twenty years ago Roy Rosenzweig imagined a compelling mission for a new institution: “To use digital media and computer technology to democratize history—to incorporate multiple voices, reach diverse audiences, and encourage popular participation in presenting and preserving the past.” I’ve been incredibly lucky to be a part of that mission for over twelve years, at what became the Roy Rosenzweig Center for History and New Media, with last five and a half years as director. Today I am announcing that I will be leaving the center, and my professorship at George Mason University, the home of RRCHNM, but I am not leaving Roy’s powerful vision behind. Instead, I will be extending his vision—one now shared by so many—on a new national initiative, the Digital Public Library of America.

Out of Body Experiences Out of body experiences (OBEs or OOBEs) involve the vivid sensation of moving outside your physical body and sometimes traveling far beyond it. OBEs are most likely to occur when you are asleep, meditating or practicing wake-induced lucid dream exercises. Indeed, many dream explorers agree that out-of-body phenomena are extensions of the lucid dream experience. Around 1 in 10 people have experienced an OBE at some time in their lives - and some people have them frequently. There are many ways to induce an OBE and we'll look at a practical technique for doing so at the end of this article.

Some brain wiring continues to develop well into our 20s The human brain doesn't stop developing at adolescence, but continues well into our 20s, demonstrates recent research from the Faculty of Medicine & Dentistry at the University of Alberta. It has been a long-held belief in medical communities that the human brain stopped developing in adolescence. But now there is evidence that this is in fact not the case, thanks to medical research conducted in the Department of Biomedical Engineering by researcher Christian Beaulieu, an Alberta Innovates – Health Solutions scientist, and by his PhD student at the time, Catherine Lebel. Lebel recently moved to the United States to work at UCLA, where she is a post-doctoral fellow working with an expert in brain-imaging research.