Psst! The Human Brain Is Wired For Gossip 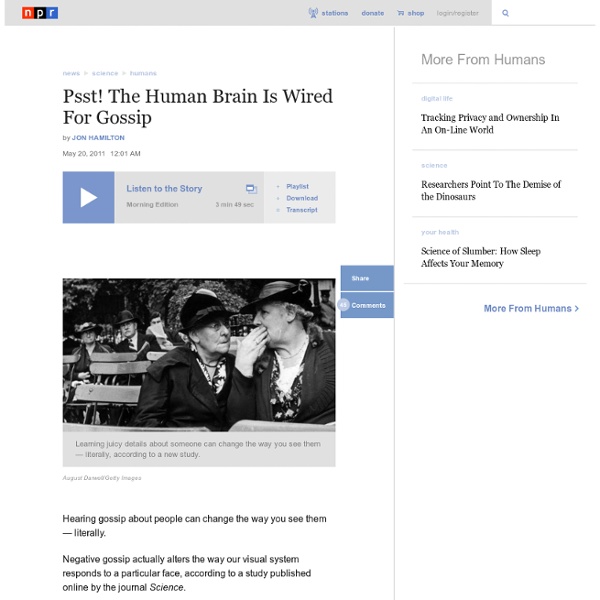 hide captionLearning juicy details about someone can change the way you see them — literally, according to a new study. August Darwell/Getty Images Hearing gossip about people can change the way you see them — literally. Negative gossip actually alters the way our visual system responds to a particular face, according to a study published online by the journal Science. The findings suggest that the human brain is wired to respond to gossip, researchers say. "Gossip is helping you to predict who is friend and who is foe," says Lisa Feldman Barrett, distinguished professor of psychology at Northeastern University and an author of the study. Barrett is part of a team that has been studying how gossip affects not just what we know about an unfamiliar person but how we feel about them. But Barrett and her team wanted to answer another question: Once hearsay has predisposed us to see someone in a certain way, is it possible that we literally see them differently? Science/AAAS Related:  Education plan • `test 1016

Brain Games & Brain Training Enneagram Test These two online Enneagram tests help you to determine which personality type you are. Your wing will also be indicated. Some suggestions on how to take the tests to get the most accurate results can be found below. Classical enneagram test This test consists of pages containing nine questions or less (one for each Enneagram type). Enneagram test with instinctual variant With this test you are presented with pairs of character traits to rate. Getting accurate results from these Enneagram tests It's important to answer the questions honestly. Actually it is not so easy to answer the questions honestly, as we all want to see ourselves as better than we are, and we often have preconceived ideas about ourselves that are not really true. For instance, if you resent being fearful, you might have worked to develop courage to compensate, but the fear is still there beneath the surface.

40 Lessons for Finding Strength in Hard Times post written by: Marc Chernoff Sometimes you have to die a little on the inside first in order to be reborn and rise again as a stronger, smarter version of yourself. Nobody gets through life without losing someone they love, someone they need, or something they thought was meant to be. But it is these losses that make us stronger and eventually move us toward future opportunities for growth and happiness. Over the past five years Angel and I have dealt with several hardships, including the sudden death of a sibling, the loss of a best friend to illness, betrayal from a business partner, and an unexpected (breadwinning) employment layoff. These experiences were brutal. Here are some lessons we’ve learned along the way: You are not what happened to you in the past. – No matter how chaotic the past has been, the future is a clean, fresh, wide open slate. Photo by: Chris Schoenbohm If you enjoyed this article, check out our new best-selling book.

Where is The Mind?: Science gets puzzled and almost admits a non-local mentalscape. This will be the last "home-produced" blog entry for a while [save the short "Everyday Spirituality" which will follow it as a sign-off] . West Virginia beckons tomorrow morning and off I will go to whatever that entails. As I said in one of the commentary responses the other day, I hope that reading two journal runs "cover-to-cover" will bring up a few thoughts worth sharing. This day's entry was inspired by two articles bumped into coincidentally which had scientists puzzling about a holographic universe and a non-local mind. The first of these articles [both from the New Scientist] was "Where in the World is the Mind?" That brings in the second serendipitous article. It reminded me then, also, of a moment when I was able to spend a [too short] time with David Bohm, the famous theoretical physicist. I am happy to be [in body] a holographic projection of force dimensions--not from the "edge" of the universe but its core reality.

The Brain Story | Documentary Heaven | Watch Free Documentaries Online Why do we think and feel as we do? For years man has sought to understand the workings of the mind. Now, with advances in modern-day technology and developments in neuroscience, a whole new world of brain research is opening up. Understanding our minds is becoming a reality. Guided by top neuroscientist Susan Greenfield, Brain Story attempts to answer the question “What is my mind and who am I?” All in the Mind. In the Heat of the Moment. The Mind’s Eye. First Among Equals. Growing the Mind. The Final Mystery.

INTJ Relationships INTJs believe in constant growth in relationships, and strive for independence for themselves and their mates. They are constantly embarking on "fix-up" projects to improve the overall quality of their lives and relationships. They take their commitments seriously, but are open to redefining their vows, if they see something which may prove to be an improvement over the existing understanding. INTJs live much of their lives inside their own heads. INTJs are not naturally in tune with their own feelings, or with what other people are feeling. Sexually, the INTJ enjoys thinking about intimacy, and about ways to perfect it. INTJs are able to leave relationships when they're over, and get on with their lives. INTJs are highly intense, intelligent people who bring a lot of depth and insight into most major areas of their life. Although two well-developed individuals of any type can enjoy a healthy relationship, the INTJ's natural partner is the ENFP, or the ENTP.

Personality Types Under Stress Personality Types Under Stress - INTP, INTJ, INFP, INFJ INTPs lack follow-through and this can isolate their ideas from practical examination. Their notions become over-intellectualized and too abstract to be of practical benefit. If stress continues, the INTP's mind seems to freeze and block out the vital information it has worked so hard to accumulate. INTJs' precision thinking and need for accuracy causes them to be inflexible at times. When stress increases, the INTJ can become argumentative and disagreeable. INFPs feel internal turmoil when they find themselves in situations in which there is conflict between their inner code of ethics and their relationships with others. As with all NFs, the INFP will feel lost and perplexed at stressful times. The agreeable nature and quiet personality of INFJs makes them particularly vulnerable to hurt feelings.