Time on the Brain: How You Are Always Living In the Past, and Other Quirks of Perception 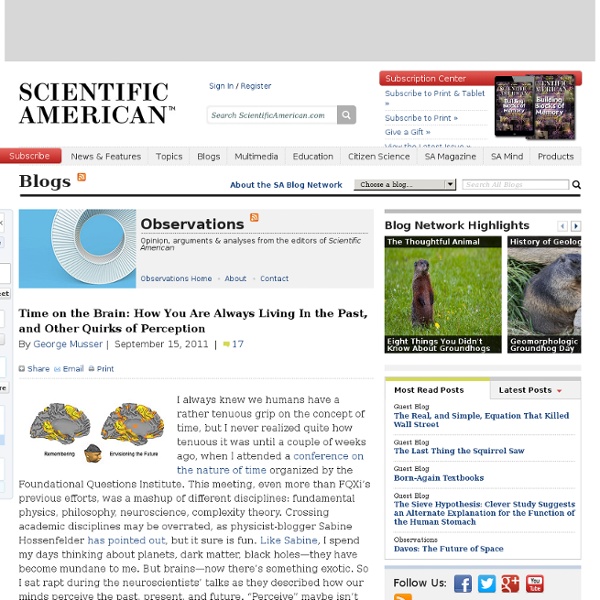 I always knew we humans have a rather tenuous grip on the concept of time, but I never realized quite how tenuous it was until a couple of weeks ago, when I attended a conference on the nature of time organized by the Foundational Questions Institute. This meeting, even more than FQXi’s previous efforts, was a mashup of different disciplines: fundamental physics, philosophy, neuroscience, complexity theory. Crossing academic disciplines may be overrated, as physicist-blogger Sabine Hossenfelder has pointed out, but it sure is fun. Like Sabine, I spend my days thinking about planets, dark matter, black holes—they have become mundane to me. But brains—now there’s something exotic. So I sat rapt during the neuroscientists’ talks as they described how our minds perceive the past, present, and future. McDermott outlined the case of Patient K.C., who has even worse amnesia than the better-known H.M. on whom the film Memento was based. Alas, they couldn’t.

Visual thinking school Visual thinking is a way to organize your thoughts and improve your ability to think and communicate. It’s a way to expand your range and capacity by going beyond the linear world of the written word, list and spreadsheet, and entering the non-linear world of complex spacial relationships, networks, maps and diagrams. It’s also about using tools — like pen and paper, index cards and software tools — to externalize your internal thinking processes, making them more clear, explicit and actionable. Your brain does not process information and it is not a computer No matter how hard they try, brain scientists and cognitive psychologists will never find a copy of Beethoven’s 5th Symphony in the brain – or copies of words, pictures, grammatical rules or any other kinds of environmental stimuli. The human brain isn’t really empty, of course. But it does not contain most of the things people think it does – not even simple things such as ‘memories’. Our shoddy thinking about the brain has deep historical roots, but the invention of computers in the 1940s got us especially confused. For more than half a century now, psychologists, linguists, neuroscientists and other experts on human behaviour have been asserting that the human brain works like a computer. To see how vacuous this idea is, consider the brains of babies.

emotional intelligence Prism Brain Mapping is an online assessment package that promises… Well… it promises all kind of things, from “Enhanced selling skills” to “Developing female leaders” to 360 degree assessments”, whatever the hell that’s supposed to mean. It appears to be a pretty big deal, with practitioners all around the world and a certification program for new ‘practitioners’. So, what is it? It’s basically a re-packaging of some old psychometric tests with a neuroscience-y sounding spin.

Religion May Cause Brain Atrophy Faith can open your mind but it can also cause your brain to shrink at a different rate, research suggests. Researchers at Duke University Medical Centre in the US claim to have discovered a correlation between religious practices and changes in the brains of older adults. The study, published in the open-access science journal, Public Library of Science ONE, asked 268 people aged 58 to 84 about their religious group, spiritual practices and life-changing religious experiences. Changes in the volume of their hippocampus, the region of the brain associated with learning and memory, were tracked using MRI scans, over two to eight years. Protestants who did not identify themselves as born-again were found to have less atrophy in the hippocampus region than did born-again Protestants, Catholics or those with no religious affiliation. Although the brain tends to shrink with age, atrophy in the hippocampus has been linked with depression and Alzheimer's disease.

Why Does Beauty Exist? Over at the always excellent Not Exactly Rocket Science, Ed Yong summarizes a new investigation into the neural substrate of beauty: Tomohiro Ishizu and Semir Zeki from University College London watched the brains of 21 volunteers as they looked at 30 paintings and listened to 30 musical excerpts. All the while, they were lying inside an fMRI scanner, a machine that measures blood flow to different parts of the brain and shows which are most active. The recruits rated each piece as “beautiful”, “indifferent” or “ugly”.The scans showed that one part of their brains lit up more strongly when they experienced beautiful images or music than when they experienced ugly or indifferent ones – the medial orbitofrontal cortex or mOFC.Several studies have linked the mOFC to beauty, but this is a sizeable part of the brain with many roles. It’s also involved in our emotions, our feelings of reward and pleasure, and our ability to make decisions. But why does beauty exist?

60 Small Ways to Improve Your Life in the Next 100 Days Contrary to popular belief, you don’t have to make drastic changes in order to notice an improvement in the quality of your life. At the same time, you don’t need to wait a long time in order to see the measurable results that come from taking positive action. All you have to do is take small steps, and take them consistently, for a period of 100 days. Below you’ll find 60 small ways to improve all areas of your life in the next 100 days. Home

How We Create Reality Al Smith, Contributing WriterWaking Times Do you wonder why life is a chaotic roller coaster of both positive and negative events? Have you, like most, earnestly tried positive thinking, meditation or prayer without any tangible beneficial results? Max Planck Neuroscience on Nautilus: Surprising Network Activity in the Immature Brain One of the outstanding mysteries of the cerebral cortex is how individual neurons develop the proper synaptic connections to form large-scale, distributed networks. Now, an international team of scientists have gained novel insights from studying spontaneously generated patterns of activity arising from local connections in the early developing visual cortex. These early activity patterns serve as a template for the subsequent development of the long-range neural connections that are a defining feature of mature distributed networks. In a recently published Nature Neuroscience article, scientists at the Max Planck Florida Institute for Neuroscience, Frankfurt Institute for Advanced Studies, Goethe University of Frankfurt, and the University of Minnesota detail how they investigated the visual cortex of the ferret, an ideal model system to explore the early development of networks in the cortex. Lead image credit: sdecoret / Shutterstock

Women's exercise linked to lower cognitive skill - health - 07 January 2011 WOMEN who habitually take strenuous exercise might be at risk of damaging their cognitive function later in life. Strenuous exercise is known to reduce oestrogen levels in women and girls. This can delay the start of menstruation, and can lead to irregular periods in adult women. Low levels of oestrogen in premenopausal women have been linked to impaired mental function in later life. 10 Ways Our Minds Warp Time How time perception is warped by life-threatening situations, eye movements, tiredness, hypnosis, age, the emotions and more… The mind does funny things to our experience of time. Just ask French cave expert Michel Siffre. In 1962 Siffre went to live in a cave that was completely isolated from mechanical clocks and natural light. He soon began to experience a huge change in his perception of time. When he tried to measure out two minutes by counting up to 120 at one-second intervals, it took him 5 minutes.