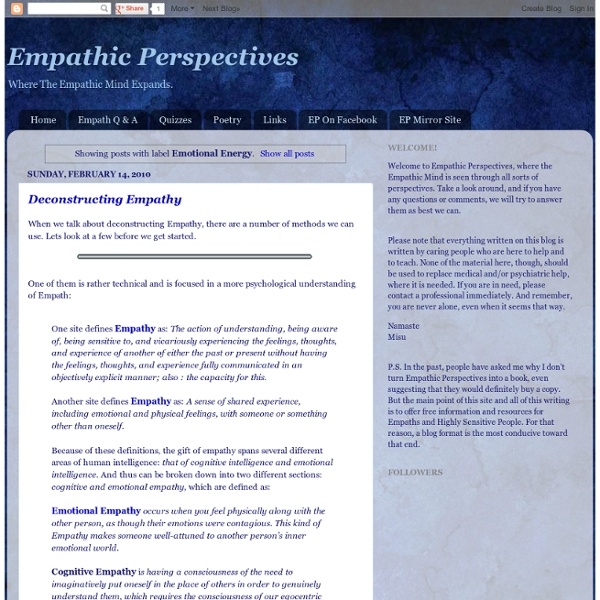 In this discussion we will discuss energy focus and manipulation. How you utilize this information and what you do with it, is solely on you. I am simply providing information to help people understand how it works and to get you started on whatever path you choose to walk upon. So lets start with the basics, some definitions of what kind of energy we will be working with, and some other important terms that will be essential in understanding this discussion. Definitions Energy is the capacity of a physical system to perform work. Energy is a property or characteristic (or trait or aspect?) Prana is the notion of a vital, life-sustaining force of living beings and vital energy. Prana is the life force or vital energy, which permeates the body and is especially concentrated along the midline in the chakras. Prana is the life sustaining energy centered in the human brain; the first of the five airs of Ayurvedic philosophy; the life force governing inspiration and the conscious intellect.

Spiritual Growth and Psychic Development In view of the considerable attention and publicity currently being given to psychism, it will be found beneficial to review the Rosicrucian Fellowship Teachings concerning this phenomenon, and thus to understand why these Teachings emphasize the superiority of positive spiritual growth over negative psychic development. Two Classes of Sensitives As far as the growth of so-called extra-sensory faculties is concerned, humanity is divided into two general categories. Among the members of one category, the "ordinary" people engaged in material pursuits and by and large out of touch with the spiritual worlds, the connection between dense and vital body is close. In the other category, that of the so-called "sensitives," the connection between the two vehicles is loose. These "sensitives", in turn, are also divided into two classes; voluntary clairvoyants, positive and actuated by their own wills; and involuntary clairvoyants, negative and amenable to the will others. Voluntary Clairvoyant

What is an Empath? Tools and Resources for Empaths | EliseLebeau.com Clairsentience - Dark Metal Classic The ability to extend the mind beyond the body to sense surroundings and disdtant places an their natures is the province of claircentients, typically members of IRSA. The order is founded on pseudoreligious principles, through more in structure and direction than in any advocated philosophy. However, raw Clairsentience is not based on any precepts. The special awareness possessed by clarirsentients makes them ideal investigators and scouts. Clairsentient powers are potent but often difficult to understand or interpret. the visions imparted by this Aptitude range from hazy to down right obscure. Botching The spatial and sensory relationship involved in clairsentience boggles the mind. Basic Technique: The Sight A more refined manifestation of the basic Attunement that all psions possess, this technique enables the clairsentient to "see" the psi energy flowing through all things even more clearly. This technique can also be used to perceive areas of strong supernatural taint. Psychometry

47th PROBLEM OF EUCLID - What is the meaning of this Masonic Symbol? Most Masonic books, simply describe it as "A general love of the Arts and Sciences". However, to leave its explanation at that would be to omit a subject which is very important... not only of Pythagoras's Theory, but of the Masonic Square. What Are These 3 Black Boxes and Why Are They Important to Freemasons? We are told that Euclid, (the Father of Geometry), who lived several hundred years after Pythagoras, worked long and hard to solve the 3:4:5: ratio puzzle. The math is the key to understanding this symbol's broader and universal meaning. The Pythagorean Theorem, also known as the 47th Problem of Euclid or 3:4:5: "In any right triangle, the sum of the squares of the two sides is equal to the square of the hypotenuse." The Right Triangle, below, shows the sides of 3, 4 and 5. A little later, when we begin to build it, (with sticks and string), you will place your sticks at the 3 corners of this Right triangle. The square of 3 is 9. The square of 4 is 16. The square root of 25 is 5. 1. 2.

New “Magic Number” inside Atoms Discovered “Magic numbers” of protons and neutrons can make an atomic nucleus exceptionally stable—and a new one has just been added to the existing menagerie that helps sketch a fuller picture of the complicated inner workings of atoms. By smashing beams of nuclei together at high speeds, researchers have discovered that when a calcium atom has 34 neutrons in its nucleus, things stay pretty quiet—at least for a few milliseconds. The discovery overturns some of scientists’ previous notions about magic numbers and opens up a new line of inquiry for nuclear physics. Inside nuclei, protons and neutrons fill up separate buckets—called shells—with each shell characterized by a different energy level that can accommodate only a certain number of particles. In this alternative realm of radioactive isotopes magic numbers aren’t what they seem. There was much uncertainty about the stability of 54calcium, which has 20 protons and 34 neutrons.

ticsnow | Technology, Innovation, Creativity in Sustainability Now. Earth & The Threefold Cycle Chapter 3 Earth & The Threefold Cycle In the first chapter the mandala of the birth chart was described as having four quarters which can each be related to one of the basic psychological functions, thought, feeling, sensation and intuition. These functions are not normally marked on the chart, but their location and the roles they play should not be forgotten when they seemingly disappear, to be replaced by the so-called dial of mundane houses. When one speaks of "mundane houses", or "mundane astrology", one is using the word not in its sense of "unadventurous" or "uninspiring" but in the sense of "Earth", relating to the influence and affairs of the world. The twelve mundane houses, or psychological divisions, can be considered in various ways; but however they are interpreted, they are always taken to represent twelve distinct but smoothly sequential compartments of basic awareness, common to all humanity. Compare this idea with the diagram of planetary orbits in Chapter 6.

Soma in the Americas - HIDDEN IN PLAIN SIGHT A New Road of Archaeological Inquiry By Carl de Borhegyi Copyright 2011 The prevailing anthropological view of ancient New World history is that its indigenous peoples developed their own complex cultures independent of outside influence or inspiration. Transoceanic contact with the ancient civilizations of the New World will remain a problem until it can be demonstrated without a shadow of a doubt that many traits of the New World civilizations had their origin in the Old World. Over the years there has been a great deal of speculation among scholars concerning the true identity of the mystery plant in the Rig Veda called Soma, the only plant known to have been deified in the history of human culture, (Furst, 1972:201). We know from the sacred texts called the Rig Veda, (Veda is a Sanskrit word meaning "to see") that Soma was an intoxicating plant worshiped as both a god and holy beverage by a people who called themselves Aryans. Quoting Maya archaeologist Stephan F. de Borhegyi......