Why you proably won't experience your own traumatic death 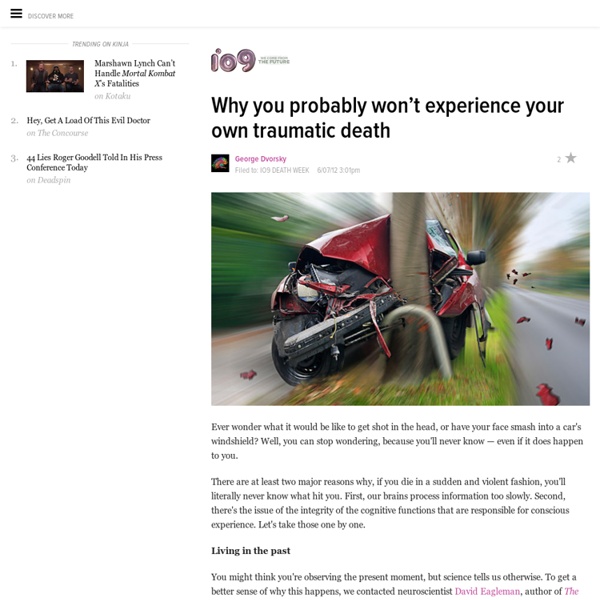 The evolutionary reason why rock music excites us: it reminds us of animal distress calls Distorted sounds remind us of animals in distress - which excites our body By Eddie Wrenn Published: 16:40 GMT, 13 June 2012 | Updated: 16:44 GMT, 13 June 2012 Jimi Hendrix playing his guitar during his set at the Woodstock Music and Art Fair in 1969 Ever wonder why Jimi Hendrix's rendition of 'The Star-Spangled Banner' moved so many people in 1969 or why the music in the shower scene of 'Psycho' still sends chills down your spine? A University of California-based team of researchers has isolated some of the ways in which distorted and jarring music is so evocative, and they believe that the mechanisms are closely related to distress calls in animals. They report their findings in the latest issue of the peer-reviewed scientific journal Biology Letters, which publishes online June 12. Blumstein is an authority on animal distress calls, particularly among marmots. They determined that the soundtracks for each genre possessed characteristic emotion-manipulating techniques.

The Infinity Burial Project Why optimists usually win: Simply thinking positive thoughts can lead people to overcome tough challenges Thinking positively plants a 'suggestion' in the mindCan change behaviour to drive you towards outcome'Suggestion' is much more powerful than thought By Rob Waugh Published: 13:34 GMT, 8 June 2012 | Updated: 13:34 GMT, 8 June 2012 Victory! Thinking positively about something really might make it happen, psychologists say. Simply anticipating something good can gear up hidden circuits in the brain to drive you towards it. Thinking about a happy outcome plants a 'suggestion' in the mind, in a similar way to a hypnotist. Two psychologists at the University of Victoria, New Zeland said: ‘Once we anticipate a specific outcome will occur, our subsequent thoughts and behaviors will actually help to bring that outcome to fruition.’ It can't work magic, obviously, but researchers say effects of suggestion are more powerful than people think and can change behaviours and even outcomes. The expectancies led to automatic responses which can lead to the outcome we were expecting all along.

The 6 Coolest Things You Can Do With Your Dead Body Once you're dead - and you will be, before you know it - do you really want to spend the rest of eternity occupying a tiny plot of perfectly good land? Why? So your loved ones can lay flowers on it and dogs can come by and relieve themselves on your headstone later? Screw that. Get Loaded Into Some Bullets When the husband of South London's Joanna Booth died, she did what we hope our loved ones do for us: she loaded his ashes into shotgun shells and killed every non-human thing in sight. Her husband, James, was an expert on vintage shotguns before he slipped into a food poison-induced coma for 18 months, subsequently passing away at the age of 50. See? Taking the joke several thousand steps too far, she went to a shotgun cartridge maker and had a little bit of James crammed into 275 12-gauge shotgun shells. "James would've wanted me to do this." Just Imagine... You die at the hands of a brutal street gang. (Your name is Bobby). Be a Fireworks Display Get Turned Into a Pencil Like this.

How Neuroscientists and Magicians Are Conjuring Brain Insights Apollo Robbins (right) in action removing the wristwatch of Mariette DiChristina. (Credit: Flip Phillips.) “I see you have a watch with a buckle.” Standing at my side, Apollo Robbins held my wrist lightly as he turned my hand over and back. I knew exactly what was coming but I fell for it anyway. “Yes,” I said, trying to keep an eye on him, “that looks pretty easy for you to take off, but my rings would be harder.” While I considered the answer, he had already removed my watch and put it on his own wrist behind his back, unseen. Robbins had just skillfully managed my attentional spotlight—that is, the focus of awareness at any given moment. Islands of Subjective Reality We were at the Neuromagic 2012 conference held May 7 to 10, 2012, on San Simón, also appropriately named the Island of Thought, on the north Atlantic coast near Vigo, Spain. Why are scientists working with sleight-of-hand artists? The conference explored several aspects of attention. Windows of the Soul

The 7 Most Terrifying Archaeological Discoveries No professional position, aside from perhaps police officer and horny pizza delivery boy, is more frequently misrepresented in film than archaeologist. In movies, archaeologists are all dashing figures, risking life and limb in the pursuit of knowledge while arcane artifacts and ancient traps besiege their efforts. Or else they're perpetually opening sealed, cursed tombs and stumbling into the haunted caves of unspeakable evils in the name of science. But in reality, we all know archaeology is nothing like that. Obviously. It's way more terrifying. #7. Getty In 1886, Gaston Maspero, the head of the Egyptian Antiquities Service, was doing like he do -- just taking mummies out of their sarcophagi, unwrapping them, dictating all kinds of boring notes -- when he came across an unusually plain burial box. anubis4_2000.tripod.com FlickrOr having the most horrific orgasms known to man. National Geographic Yep. darkdissolution"Not without my makeup!" #6. So what happened? You're welcome, Hollywood.

Cambridge Uni to complete Charles Darwin's last (and most creepy) experiment into human emotion By Eddie Wrenn Published: 12:37 GMT, 15 May 2012 | Updated: 07:59 GMT, 16 May 2012 One of Charles Darwin's last experiments - which seems more like a trick the evolutionist enjoyed playing on his dinner guests - has been re-born for the digital age. The pioneer of the theory of evolution owned a collection of photographs showing a French man having his face contorted via electrical shock treatment into a range of grimaces. So, sometime between dessert and a final drink in Darwin's home in 1868, Darwin would confront his poor dinner guests with the images and ask them to describe the man's expressions in their own words. Darwin then collated the responses from the 24 guests who, instead of walking out or punching him on the nose, answered his questions, and used these 'crowd-sourced' answers to find the definitive description for each face. Darwin was fascinated by the photos taken by French neurologist Duchenne de Boulogne, who referred to facial expressions as the 'gymnastics of the soul'.

No regrets! Old people who learn not to regret the past are happier about the present - and cope better with stress By Tamara Cohen Published: 18:01 GMT, 19 April 2012 | Updated: 18:07 GMT, 19 April 2012 No regrets? If you HAVE had a few regrets, it might be to best to let them go, as dwelling on what might have been makes for a miserable old age, a study suggests. German scientists say regrets naturally decrease as we get older – as we try to make the most of the time we have left and have fewer opportunities for second chances. Younger people feel them far more acutely, as from an evolutionary perspective it is more important they learn not to repeat their mistakes. But old people who've learnt to repress them most effectively feel less stress and control OTHER emotions more effectively. Learning to banish your regrets could be a survival mechanism critical to a happy old age. The researchers used brain scans to test three groups – youngsters with an average age of 25, a healthy older group and a depressed older group, both with an average age of 66.