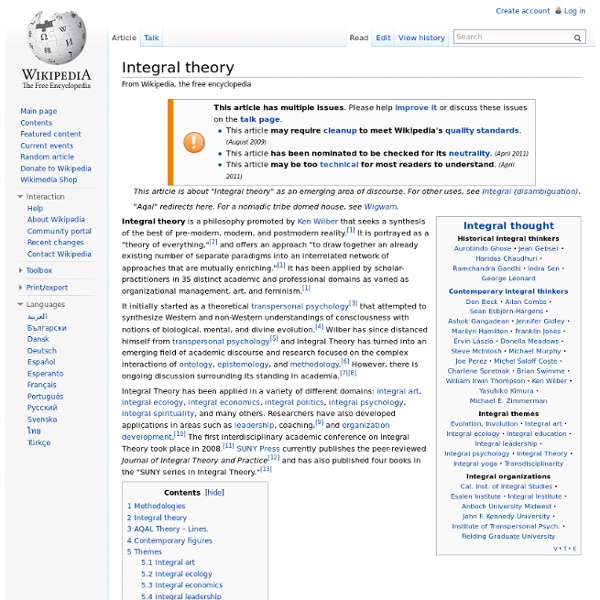 Integral theory, a philosophy with origins in the work of Sri Aurobindo and Jean Gebser, and promoted by Ken Wilber, seeks a synthesis of the best of pre-modern, modern, and postmodern reality.[1] It is portrayed as a "theory of everything,"[2] and offers an approach "to draw together an already existing number of separate paradigms into an interrelated network of approaches that are mutually enriching."[1] It has been applied by scholar-practitioners in 35 distinct academic and professional domains as varied as organizational management and art.[1] Methodologies[edit] AQAL, pronounced "ah-qwul," is a widely used framework in Integral Theory. Sri Aurobindo, Jean Gebser, and Ken Wilber, have all made significant theoretical contributions to integral theory. In his book The Ever-Present Origin, Swiss phenomenologist Jean Gebser distinguished between five structures of consciousness: archaic, magic, mythical, mental, and integral. AQAL Theory – Lines. Principles and Properties: Themes[edit] H. Related:  humanities • Psicología

Ken Wilber Kenneth Earl "Ken" Wilber II (born January 31, 1949, in Oklahoma City, Oklahoma) is an American writer and public speaker. He has written and lectured about mysticism, philosophy, ecology, and developmental psychology. His work formulates what he calls Integral Theory.[1] In 1998 he founded the Integral Institute.[2] Biography[edit] Wilber was born in 1949 in Oklahoma City. In 1967 he enrolled as a pre-med student at Duke University.[3] He became inspired, like many of his generation, by Eastern literature, particularly the Tao Te Ching. In 1973 Wilber completed his first book, The Spectrum of Consciousness,[5] in which he sought to integrate knowledge from disparate fields. In 1982 New Science Library published his anthology The Holographic Paradigm and other Paradoxes[6] a collection of essays and interviews, including one by David Bohm. In 1983 Wilber married Terry "Treya" Killam who was shortly thereafter diagnosed with breast cancer. Theory[edit] Holons[edit] Quadrants[edit]

Meme "Memes" redirects here. For the weevil genus known as Memes, see Hylobiini. A meme (/ˈmiːm/ meem)[1] is "an idea, behavior, or style that spreads from person to person within a culture."[2] A meme acts as a unit for carrying cultural ideas, symbols, or practices that can be transmitted from one mind to another through writing, speech, gestures, rituals, or other imitable phenomena with a mimicked theme. Supporters of the concept regard memes as cultural analogues to genes in that they self-replicate, mutate, and respond to selective pressures.[3] The word meme is a shortening (modeled on gene) of mimeme (from Ancient Greek μίμημα Greek pronunciation: [míːmɛːma] mīmēma, "imitated thing", from μιμεῖσθαι mimeisthai, "to imitate", from μῖμος mimos "mime")[4] and it was coined by the British evolutionary biologist Richard Dawkins in The Selfish Gene (1976)[1][5] as a concept for discussion of evolutionary principles in explaining the spread of ideas and cultural phenomena. Origins Memetics

Existentiell Though it is not commonly used in philosophy outside of discussions of Heidegger's seminal work Being and Time, it is important to understand Heidegger's definition of the term if one wishes to study Being and Time. Heidegger distinguishes between his two terms "existential" and "existentiell" in the Introduction to Being and Time. In Being and Time, the word existentiell is used to describe an ontic understanding of beings in the world. Definition Dasein always understands itself in terms of its existence, in terms of its possibility to be itself or not be itself. Etymology Heidegger did not coin the term "existentiell". See also[edit] Notes[edit] Jump up ^ Martin Heidegger, Being and Time, Introduction, Section 4. A short history of British Anarcho-syndicalism Origins and ideas of anarcho-syndicalism Anarcho-syndicalism is a distinct school of thought within anarchism. It seeks to abolish the wage system and private ownership of the means of production which lead to the class divisions in society. The three important principles of anarcho-syndicalism are solidarity, direct action and workers' self-management. The origins of anarcho-syndicalism can be traced back to the First International, also known as the International Workingmen's Association (IWA), formed in 1864. After the demise of the International and the period of repression following the defeat of the Paris Commune, there was a move by some anarchists towards propaganda by deed to bring about change. Many anarchists though saw the futility of individual action that had alienated them from the working class and sought to re-enter and influence a re-emerging labour movement. They rejected the idea of “theorising” as an abstract exercise. These ideas were taken up as early as 1894.

Syndicalism Syndicalism is a type of proposed economic system, a form of socialism, considered a replacement for capitalism. It suggests that industries be organised into confederations or syndicates. It is "a system of economic organization in which industries are owned and managed by the workers."[1] Syndicalism is also used to refer to the tactic of bringing about this social arrangement, typically expounded by anarcho-syndicalism and De Leonism. Theory[edit] Basic outline of syndicalism as an economic system. Syndicalism is one of the three most common currents of socialist economics, together with market socialism and socialist planned economies. Syndicalists state that society ought to be organised bottom-up based on direct democracy, confederation, workplace democracy and decentralised socialism. Syndicalism and anarcho-syndicalism[edit] Related theories include anarchism, socialism, Marxism, Leninism, and communism. History[edit] See also[edit] [edit] Further reading[edit] External links[edit]

Hacking Knowledge: 77 Ways To Learn Faster, Deeper, & Better If someone granted you one wish, what do you imagine you would want out of life that you haven’t gotten yet? For many people, it would be self-improvement and knowledge. Newcounter knowledge is the backbone of society’s progress. Life-changing knowledge does typically require advanced learning techniques. Health Shake a leg. Balance Sleep on it. Perspective and Focus Change your focus, part 2. Recall Techniques Listen to music. Visual Aids Every picture tells a story. Verbal and Auditory Techniques Stimulate ideas. Kinesthetic Techniques Write, don’t type. Self-Motivation Techniques Give yourself credit. Supplemental Techniques Read as much as you can. For Teachers, Tutors, and Parents Be engaging. For Students and Self-Studiers Be engaged. Parting Advice Persist. Sources For This Article This is only a partial list of sources, focusing only on Web sites. Did you enjoy this article?