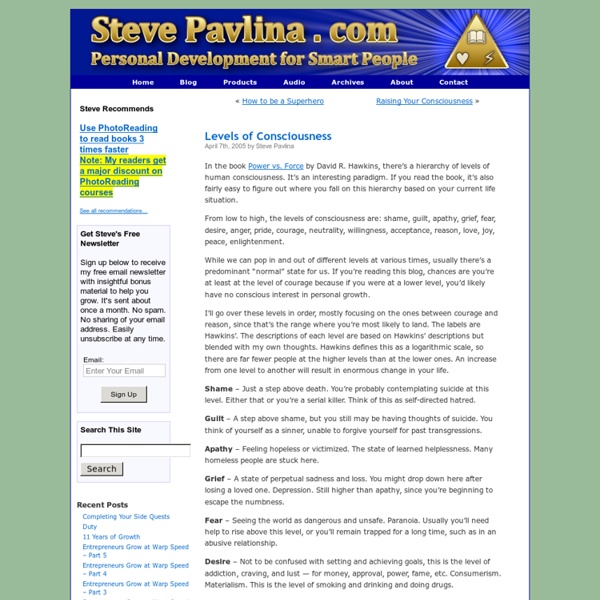 In the book Power vs. Force by David R. Hawkins, there’s a hierarchy of levels of human consciousness. It’s an interesting paradigm. If you read the book, it’s also fairly easy to figure out where you fall on this hierarchy based on your current life situation. From low to high, the levels of consciousness are: shame, guilt, apathy, grief, fear, desire, anger, pride, courage, neutrality, willingness, acceptance, reason, love, joy, peace, enlightenment. While we can pop in and out of different levels at various times, usually there’s a predominant “normal” state for us. I’ll go over these levels in order, mostly focusing on the ones between courage and reason, since that’s the range where you’re most likely to land. Shame – Just a step above death. Guilt – A step above shame, but you still may be having thoughts of suicide. Apathy – Feeling hopeless or victimized. Grief – A state of perpetual sadness and loss. Fear – Seeing the world as dangerous and unsafe. Peace – Total transcendence. Related:  Levels of consciousness • etv168

Jean Gebser Jean Gebser (German: [ˈɡeːpsɐ]; August 20, 1905 – May 14, 1973) was a philosopher, a linguist, and a poet, who described the structures of human consciousness. Biography[edit] Born Hans Gebser in Posen in Imperial Germany (now Poland), he left Germany in 1929, living for a time in Italy and then in France. When the Spanish Civil War began, he moved to Paris. Late in life, Gebser travelled widely in India, the Far East, and the Americas, and wrote half a dozen more books. Gebser died in Wabern bei Bern on May 14, 1973 "with a soft and knowing smile." His personal letters and publications are held at the Gebser Archives at the University of Oklahoma History of Science Collections, Norman, Oklahoma, Bizzel Libraries. Consciousness in transition[edit] Gebser's major thesis was that human consciousness is in transition, and that these transitions are "mutations" and not continuous. Consciousness is "presence", or "being present": The structures of consciousness[edit] The archaic structure[edit]

Volunteer Souls Through Jo Amidon Family of Light volunteers are on Earth to aid in planetary change and transformation. They are to bring in or ‘remember’ high levels of information, guidance and awareness…and most importantly to anchor the energy of unconditional love. You are incarnated upon Earth at this time to help create a high level of light, unconditional love, knowledge, willingness to grow, and to aid in the shifting of consciousness needed for the planet. Due to the roles, as Family of Light volunteers, the reasons behind your being on Earth will differ from those given in standard Earth teachings. You, who are Family of Light, are well-trained masters of disguise. Each of you have had lifetimes specifically designed to go “deeper” and “deeper” into the density on Earth. Through the lifetimes you have had on Earth, there have been several areas of focus and accomplishment: At a point in the history of Earth, Prime Creator became concerned over probabilities for Earth. Like this:

All Things Lovely Auroville Auroville (City of Dawn) is an experimental township in Viluppuram district in the state of Tamil Nadu, India, near Puducherry in South India. It was founded in 1968 by Mirra Alfassa (also known as "The Mother") and designed by architect Roger Anger.[1][2][3] As stated in Alfassa's first public message about the township, "Auroville is meant to be a universal town where men and women of all countries are able to live in peace and progressive harmony, above all creeds, all politics and all nationalities. The purpose of Auroville is to realize human unity." History[edit] Auroville was founded as a project of the Sri Aurobindo Society on Wednesday 28 February 1968 by Mirra Alfassa, "The Mother". In the inauguration ceremony attended by delegates of 124 nations on 28 February 1968, Mother gave Auroville its 4-point Charter setting forth her vision of Integral living: Auroville belongs to nobody in particular. The Matrimandir[edit] Government, belief system[edit] Society and population[edit]

Analysis of Evangelion Characters According to the Sephiroth Tree of Life Introduction It is my strong belief that Neon Genesis Evangelion is strongly influenced by the Kabbalah and the Sephiroth Tree of Life. Much has been written about the Kabbalistic symbolism in Evangelion, but I have found that Director Anno's messages run deeper than that. In fact, a closer analysis of the stages in the Tree of Life indicates that each main character in Evangelion parallels a single sephira. Each shows all the virtues, vices, illusions and obligations of their parallel sephira on the Tree of Life, and each either succeeds or fails to achieve fulfillment based on that sephira. Ultimately, Director Anno may be expressing his view of life through these impersonified sephiroth stages. And it is my intention here to discover such connections. The reader is strongly urged to first read through this summary of the Sephiroth Tree and Colin Low's Notes on Kabbalah. Comments and suggestions are most welcome. Summary of the Ten Sephiroth in the Tree of Life

Colors and Color Healing Everything is made up of electromagnetic energy vibrating at different frequencies that correspond to sound, light and color. We are drawn to the colors needed to create balance in our lives, the goal in all healing. Colors attract ... certain clothing and accessories, colors in our homes, and even the foods we eat. Colors are frequency wavelengths that we conect with based on grid (matrix) attraction. Primary colors following a spectrum called ROYGBIV or the rainbow spectrum. Colors and Frequenices Red Red is any of a number of similar colors evoked by light consisting predominantly of the longest wavelengths of light discernible by the human eye, in the wavelength range of roughly 625-740 nm. In human color psychology, red is associated with heat, energy and blood, and emotions that "stir the blood", including anger, passion, and love. One common use of red as an additive primary color is in the RGB color model. Etymology and Definitions The word red comes from the Old English read. Orange

Science & Spirituality As a child - being raised in a Christian minister's/ writer's household - I asked for the wisdom of Solomon to be my greatest gift. Although I've been called "precocious" in life, I always felt that I was merely stumbling through. Having been pulled back and forth between the physical world and it's rules and limitations (the finite), and the unseen spiritual side with it's multi-levels of rules and without limitation (infinite), I have come to understand the common rift people find and focus on between science and spirituality. But this rift is just an expression of their own genetic-makeup, culture, and personal beliefs. Most people tend to be (mostly) either: Left-brained (auditory/linguistic, mathematical, logical, squared, literal, physical, MALE) or Right-brained (visual/spatial, artistic, abstract, circular, symbolic, spiritual, FEMALE) Religious beliefs tend to follow these trends. Science balanced with love of the spiritual is the goal. Chaos ensues until this balance is found.

The Secret of Life The Nature Of Consciousness The legacy lives on at alanwatts.com I find it a little difficult to say what the subject matter of this seminar is going to be, because it's too fundamental to give it a title. I'm going to talk about what there is. And these basic ideas I call myth, not using the word 'myth' to mean simply something untrue, but to use the word 'myth' in a more powerful sense. So in the same way, we use these sort of images to try and make sense of the world, and we at present are living under the influence of two very powerful images, which are, in the present state of scientific knowledge, inadequate, and one of the major problems today are to find an adequate, satisfying image of the world. All right, now--the two images which we have been working under for 2000 years and maybe more are what I would call two models of the universe, and the first is called the ceramic model, and the second the fully automatic model. A Protestant church is a little different.

wiki : PraxisEvents/QabalahQuestionsAndAnswers Questions & Answers These are the questions and answers from the live Praxis Event on Saturday 6th January 2007. Drawing the Tree Tree and Circuits — omikron's metamap Omikron23 posted this 'metamap', combining the Chakras, Leary's Circuits and the Sephiroth. The two Pillars in Masonic tradition. — Solomon's Temple had two pillars and a lintel arch. Superimposing the Tree on the human body. Reversal of left brain/right brain and right arm/left arm. What is the origin of Qabalah ? — QBL to meet or embrace instruction, admit or allow a law, receive or obtain. Does Qabalah come from Egypt ? — I don't think directly. thought I'd get this down while I remembered. will expand further