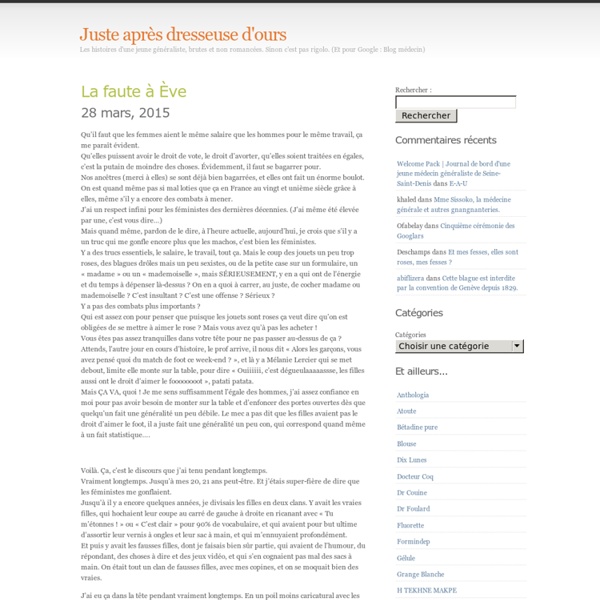 Grayson Perry: The rise and fall of Default Man Attack of the clones: Default Man is so entrenched in society that he is “like a Death Star hiding behind the moon”. Artwork by Grayson Perry Grayson Perry's guest-edited issue of the New Statesman is on sale on Thursday 9 October. Visit newstatesman.com/subscribe to get a copy Paddle your canoe up the River Thames and you will come round the bend and see a forest of huge totems jutting into the sky. Great shiny monoliths in various phallic shapes, they are the wondrous cultural artefacts of a remarkable tribe.

I’m not a feminist, but— Did you ever start a sentence with “I’m not a feminist, but—”? Do you sometimes ridicule feminists because they’re so extreme/illogical/irrelevant? Do you feel that being described as a feminist would be insulting? What’s wrong with saying that things happen to men, too? Short answer: Nothing in and of itself. The problem occurs when conversations about women can’t happen on unmoderated blogs without someone showing up and saying, “but [x] happens to men, too!” (also known as a “Patriarchy Hurts Men, Too” or PHMT argument, or a “What About The Mens?” or WATM argument).

What is male privilege? Before discussing “male privilege” it is first important to define what privilege means in an anti-oppression setting. Privilege, at its core, is the advantages that people benefit from based solely on their social status. It is a status that is conferred by society to certain groups, not seized by individuals, which is why it can be difficult sometimes to see one’s own privilege.