Lucid dreams and metacognition: Awareness of thinking; awareness of dreaming 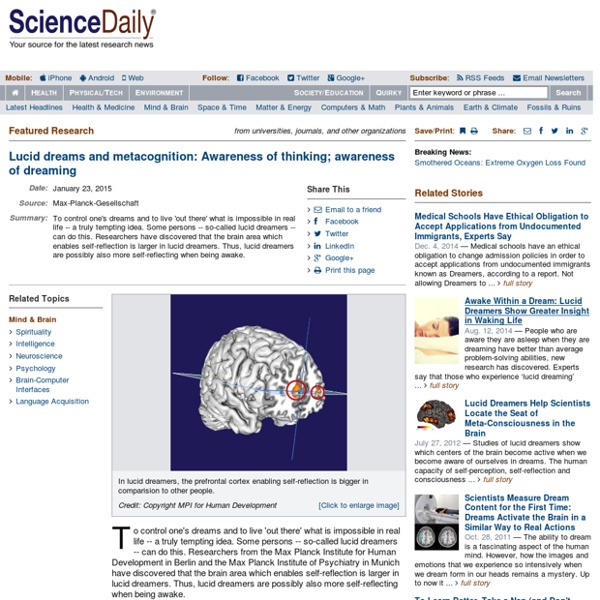 How Thinking Works: 10 Brilliant Cognitive Psychology Studies Everyone Should Know How experts think, the power of framing, the miracle of attention, the weird world of cognitive biases and more… Fifty years ago there was a revolution in psychology which changed the way we think about the mind. The ‘cognitive revolution’ inspired psychologists to start thinking of the mind as a kind of organic computer, rather than as an impenetrable black box which would never be understood. This metaphor has motivated psychologists to investigate the software central to our everyday functioning, opening the way to insights into how we think, reason, learn, remember and produce language. Here are 10 classic cognitive psychology studies that have helped reveal how thinking works. 1.

50 Questions To Help Students Think About What They Think click 2x contributed by Lisa Chesser Using the right questions creates powerful, sometimes multiple answers and discussions. Aristotle said that he asked questions in response to other people’s views, while Socrates focused on disciplined questioning to get to the truth of the matter. Potential arthritis treatment prevents cartilage breakdown Osteoarthritis, a disease that causes severe joint pain, affects more than 20 million people in the United States. Some drug treatments can help alleviate the pain, but there are no treatments that can reverse or slow the cartilage breakdown associated with the disease. In an advance that could improve the treatment options available for osteoarthritis, MIT engineers have designed a new material that can administer drugs directly to the cartilage. The material can penetrate deep into the cartilage, delivering drugs that could potentially heal damaged tissue.

Exercise Plus Fasting May Boost Brain's Neurons Forget what you've heard about "brain food"...turns out, the best food for your brain may be none at all. New research on intermittent fasting and exercise show some surprising brain benefits of depriving yourself of calories -- at least occasionally. "We have evidence that exercise and probably intermittent fasting increase the number of mitochondria in neurons," said Mark Mattson, a neuroscientist at the National Institute on Aging in Baltimore.

A Glance at the Brain’s Circuit Diagram A new method facilitates the mapping of connections between neurons. The human brain accomplishes its remarkable feats through the interplay of an unimaginable number of neurons that are interconnected in complex networks. A team of scientists from the Max Planck Institute for Dynamics and Self-Organization, the University of Göttingen and the Bernstein Center for Computational Neuroscience Göttingen has now developed a method for decoding neural circuit diagrams. Using measurements of total neuronal activity, they can determine the probability that two neurons are connected with each other.

Misattributed quotes and their surprising originators In the course of researching the history of emotional intelligence, I stumbled across an origin story that went all the way back to Plato. The classical Greek philosopher apparently wrote, “All learning has an emotional base.” Except that he never said it, according to Christopher Golis, a coach specializing in emotional intelligence. Instead, Golis’s digging unearthed no attribution to Plato before 1997, “after which it’s copied promiscuously in various inspirational/psychological books–never with source identification–and then on to various quotation websites.” Proton Pump Inhibitors Kill Mitochondria And Brain Function Mitochondria (the part of the cell that creates energy) is very important for cellular health of your whole body. R Decreased mitochondrial function has been linked to almost every disease, but in this way (described below) may help with cancer.