Neural network reconstructs human thoughts from brain waves in real time. Researchers from Russian corporation Neurobotics and the Moscow Institute of Physics and Technology have found a way to visualize a person's brain activity as actual images mimicking what they observe in real time. 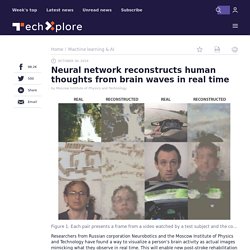 This will enable new post-stroke rehabilitation devices controlled by brain signals. The team published its research as a preprint on bioRxiv and posted a video online showing their "mind-reading" system at work. To develop devices controlled by the brain and methods for cognitive disorder treatment and post-stroke rehabilitation, neurobiologists need to understand how the brain encodes information. A key aspect of this is studying the brain activity of people perceiving visual information, for example, while watching a video. The existing solutions for extracting observed images from brain signals either use functional MRI or analyze the signals picked up via implants directly from neurons. How memories form and fade. Summary: Stable memories are encoded by teams of neurons firing in synchrony, providing redundancy that enables the memory to persist over time. 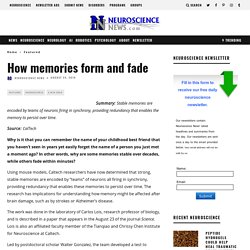 Source: CalTech. A New Study Examines How Consciousness in the Universe is Scale Invariant and Implies an Event Horizon of the Human Brain - Resonance Science Foundation. A paper recently published in the Journal of NeuroQuantology presents a unitary holofractogramic model that is redefining scientists’ view of the physics of consciousness and the seamless interplay of information dynamics from the most fundamental levels of the universe to the living system and the cosmos as a whole. 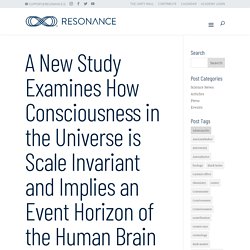 Major breakthroughs in the study of the physics of consciousness—and information dynamics in general—are occurring through the discovery and elucidation of holographic and fractal principles underlying fundamental properties of nature. New Theory: Consciousness Doesn’t Reside In The Brain Or Same Dimension. The Facts:A new analysis of the double slit experiment shows, according to the author, "remarkable" results when it comes to analyzing the mind-matter interaction problem.Reflect On:Why has most of this science been studied by the Department of Defense? 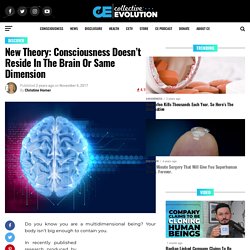 Why are real life, documented and recorded examples never used in these studies? Why is the statistical significance of parapsychology never mentioned? Does mind influence matter? The answer is an unquestionable yes, this fact is firmly established in scientific literature, and the only thing up for debate is just how much of an effect our minds can have on matter. In what’s known as the double slit experiment, tiny bits of matter (photons, electrons, or any atomic-sized object) are shot toward a screen that has two slits in it. How can a single piece of matter exist and express itself in multiple states, without any physical properties, until it is “measured” or “observed”? Fascinating, isn’t it? The New Study His Facebook post reads, Your morals and religious beliefs are linked. But not in the way you'd expect. Most religious people think their morality comes from their religion. 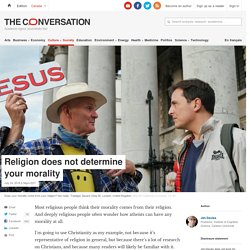 And deeply religious people often wonder how atheists can have any morality at all. I’m going to use Christianity as my example, not because it’s representative of religion in general, but because there’s a lot of research on Christians, and because many readers will likely be familiar with it. Christians will often tell you that their morality comes from their religion (or from their parents’ version of it). And if you ask them about what their religion tells them about what’s right and wrong, it will likely line up with their own ideas of right and wrong. But the causal link is not as clear as it first appears. The Bible is complex, with many beliefs, pieces of advice and moral implications. Many things in the Bible are unacceptable to modern Christians.

How a trippy 1980s video effect might help to explain consciousness. Explaining consciousness is one of the hardest problems in science and philosophy. 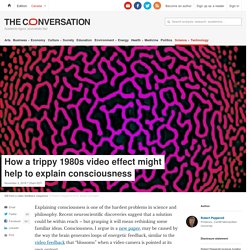 Recent neuroscientific discoveries suggest that a solution could be within reach – but grasping it will mean rethinking some familiar ideas. Consciousness, I argue in a new paper, may be caused by the way the brain generates loops of energetic feedback, similar to the video feedback that “blossoms” when a video camera is pointed at its own output. I first saw video feedback in the late 1980s and was instantly entranced. Someone plugged the signal from a clunky video camera into a TV and pointed the lens at the screen, creating a grainy spiralling tunnel. The Biological Roots of Intelligence. Science is getting closer to understanding what goes on inside the mind when we dream. Dreams are so strange and carry so much significance to us that we often feel the need to tell people about our nocturnal adventures, sometimes at tedious length. 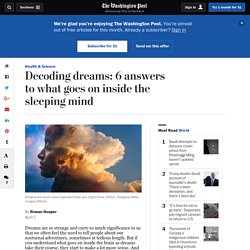 But if you understand what goes on inside the brain as dreams take their course, they start to make a lot more sense. And dreams are much more important than you might think. Here are some common questions answered about the nighttime hallucinations we call dreams. 1. As above so below: Scientists have found a multidimensional universe inside our brain. A sensational discovery has been made by experts as scientists have found that the human brain is home to structures and shapes that have up to 11 dimensions. 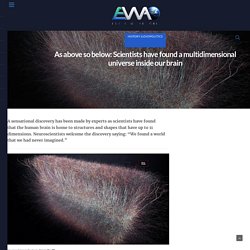 Neuroscientists welcome the discovery saying: “We found a world that we had never imagined.” Mathematical methods of algebraic topology have helped researchers find structures and multidimensional geometric spaces in brain networks. According to experts, a new study has proven that the human brain is home to structures and shapes that have up to 11 dimensions. Brain researchers gain greater understanding of how we generate internal experiences. Our mental life is rich with an enormous number of internal experiences. 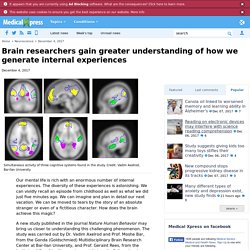 The diversity of these experiences is astonishing. We can vividly recall an episode from childhood as well as what we did just five minutes ago. We can imagine and plan in detail our next vacation. We can be moved to tears by the story of an absolute stranger or even of a fictitious character. If You Get Chills When Listening To Music, It Could Be A Sign You’re Special. Have you ever been listening to a song when all of a sudden, your heart skips a beat, the hairs on the backs of your arms stand up, and a piece of you feels as if it has taken flight? 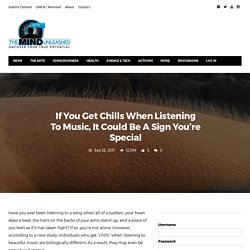 If so, you’re not alone. However, according to a new study, individuals who get “chills” when listening to beautiful music are biologically different. As a result, they may even be considered special. If Listening To Music Gives You Chills You May Have A Unique Brain. Do you ever hear a drum beat, a harmony, or a tweak of a guitar string that makes a pleasant chill run up your spine? Well, in that case, you may have a special brain. Alissa Der Sarkissian, a research assistant at the University of Southern California's (USC) Brain and Creativity Institute, noticed this strange feeling when listening to the song “Nude” by Radiohead.

“I sort of feel that my breathing is going with the song, my heart is beating slower and I’m feeling just more aware of the song — both the emotions of the song and my body’s response to it,” she explained. Neuroscience Discovers That Your Brain Can Literally Be on the Same Wavelength as Someone Else's - Ideapod. I’m sure we’ve all felt that we’ve “clicked” with someone or were on the same “wave length”. Our everyday language is full of these kind of expressions, but is it just a manner of speaking? Not quite, according to Princeton University neuroscientist Uri Hasson. Growing Up Without Siblings May Affect Your Brain's Development. A study in China claims that growing up without siblings can lead to a different brain structure than those who do. They found that only children tended to be more creative and less sociable. Previous studies have focused on the difference in behaviors, cognitive function, and personality traits between only children and those with siblings.

After all, it’s common sense that those without siblings don’t have to share their parents’ attention, and so likely get more encouragement, but miss out on the early experience of sharing, or competing. This new study, by the Southwest University in Chongqing, and published in Brain Imaging and Behavior, wanted to find out if the difference in behaviors had a neural basis. Anil Seth: Your brain hallucinates your conscious reality. Cookies are Not Accepted - New York Times. Project to map human brain from womb to birth releases stunning images. A landmark project to map the wiring of the human brain from womb to birth has released thousands of images that will help scientists unravel how conditions such as autism, cerebral palsy and attention deficit disorders arise in the brain. The first tranche of images come from 40 newborn babies who were scanned in their sleep to produce stunning high-resolution pictures of early brain anatomy and the intricate neural wiring that ferries some of the earliest signals around the organ.

The initial batch of brain scans are intended to give researchers a first chance to analyse the data and provide feedback to the senior scientists at King’s College London, Oxford University and Imperial College London who are leading the Developing Human Connectome Project, which is funded by €15m (£12.5m) from the EU. Hundreds of thousands more images will be released in the coming months and years. Taking brain scans of sleeping babies is hard enough. Being on the same wavelength isn't just a figure of speech. It's proven neuroscience. — Quartz. Physicist Richard Feynman returned over and over to an idea that drove his groundbreaking discoveries. His approach was documented by his Caltech colleague David Goodstein in the book Feynman’s Lost Lecture about physics classes Feynman taught in the 1960s: Once, I said to him, “Dick, explain to me, so that I can understand it, why spin one-half particles obey Fermi-Dirac statistics.”

Sizing up his audience perfectly, Feynman said, “I’ll prepare a freshman lecture on it.” But he came back a few days later to say, “I couldn’t do it. Study uncovers how brain damage increases religious fundamentalism. Neuroscientists Discover a Song That Reduces Anxiety By 65 Percent (Listen) Scientists Surprised to Find No Two Neurons Are Genetically Alike. Neuroscience. After watching this, your brain will not be the same. Your Brain Has A DELETE Button And Here's How To Use It! Man Missing Most Of His Brain Challenges Everything We Thought We Knew About Consciousness.