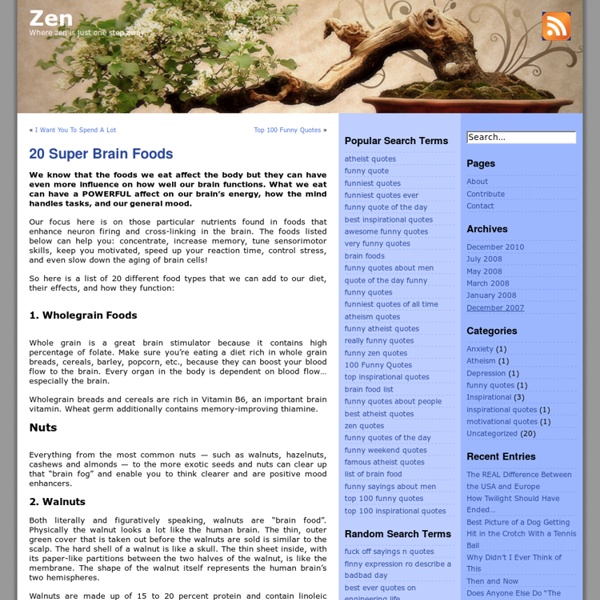 We know that the foods we eat affect the body but they can have even more influence on how well our brain functions. What we eat can have a POWERFUL affect on our brain’s energy, how the mind handles tasks, and our general mood. Our focus here is on those particular nutrients found in foods that enhance neuron firing and cross-linking in the brain. The foods listed below can help you: concentrate, increase memory, tune sensorimotor skills, keep you motivated, speed up your reaction time, control stress, and even slow down the aging of brain cells! So here is a list of 20 different food types that we can add to our diet, their effects, and how they function: 1. Whole grain is a great brain stimulator because it contains high percentage of folate. Wholegrain breads and cereals are rich in Vitamin B6, an important brain vitamin. Nuts 2. Both literally and figuratively speaking, walnuts are “brain food”. Omega 3 fatty acids found in walnuts are especially helpful in brain function. 3. 4. 5.

Related:  CERE-BRAIN • NeuroLeadership - How to Increase Your Brain Power • Psychology and Neuroscience • Power of the Mind • Healthy Eating

Meditation found to increase brain size Mental calisthenics bulk up some layers By William J. Cromie Harvard News Office People who meditate grow bigger brains than those who don't. Researchers at Harvard, Yale, and the Massachusetts Institute of Technology have found the first evidence that meditation can alter the physical structure of our brains. 10 Surprising Things That Benefit Our Brains That You Can Do Every Day One of the things that surprises me time and time again is how we think our brains work and how they actually work. On many occasions I find myself convinced that there is a certain way to do things, only to find out that actually that's the complete wrong way to think about it. For example, I always found it fairly understandable that we can multitask. Well, according to the latest research studies, it's literally impossible for our brains to handle two tasks at the same time. Recently I came across more of these fascinating experiments and ideas that helped me adjust my workflow toward how our brains actually work. So here are 10 of the most surprising things our brains do and what we can learn from them:

40 Superb Psychology Blogs Forty of the best psychology blogs, chosen to give you a broad sweep of the most interesting content being produced online right now. The list is split into three sections: first are more general psychological blogs, followed by those with an academic slant, followed by condition specific and patient perspective blogs. Other than that the blogs are presented in no particular order. Updated Sep 2012 to reflect blogs that are now inactive. General:

Creative Problem Solving with SCAMPER SCAMPER is a technique you can use to spark your creativity and help you overcome any challenge you may be facing. In essence, SCAMPER is a general-purpose checklist with idea-spurring questions — which is both easy to use and surprisingly powerful. It was created by Bob Eberle in the early 70s, and it definitely stood the test of time. The 10 Best Foods for Your Looks - Health You can slather yourself from your forehead to your pinkie toe in organic lotions, but if you think that alone will make you glow, we have some bad news. From its well documented health benefits to its undeniable impact on physical beauty, good nutrition is the pillar of every kind of healthy lifestyle. That doesn't mean you need to swear off bacon and beer or anything. The trick is finding the right balance. But with new studies coming out every month about what we should put in our mouths—not to mention the unending discovery of mysterious superfruits from deep in the forests of wherever—it can be hard to keep track of what, exactly, we should be eating. To simplify things, here's a can't-go-wrong shopping list.

Scientists to unlock the secrets of long life by unravelling DNA of world's oldest woman Dutch woman remained mentally sharp right up until her death aged 115 By Daniel Miller Updated: 10:48 GMT, 15 October 2011 Scientists are studying the DNA of a woman who was the world's oldest person until her death at the age of 115, in the belief it could contain the secrets to long life. Brain Hacks ...For answer Holmes clapped the hat upon his head. It came right over the forehead and settled upon the bridge of his nose. "It is a question of cubic capacity, " said he; "a man with so large a brain must have something in it

Need for Constant Stimulation Triggered by Dopamine in the Brain Our need for stimulation and dopamine's action upon the brain are connected, which explains why people who constantly crave stimulation are in danger of addictive behaviour such as drug abuse and gambling. The urge to actively seek out new experiences is a personality trait that psychologists have known about for years, but up until now scientists have been unable to prove how this urge relates to hormonal activities in the brain. Now, an international research team made up of scientists from the University of Copenhagen, University of Aarhus and University of Tokyo have been able to prove for the first time that this hunger for stimulation is greater on average among people who possess more of the gratification hormone - dopamine in the brain.

Related:
Related:  CERE-BRAIN   -  NeuroLeadership - How to Increase Your Brain Power   -  Psychology and Neuroscience   -  Power of the Mind   -  Healthy Eating   -  Eating & Drinking   -  Clean eating   -  MY Clean Eating   -  Eating Disorders   -  Scanwiches   -  Minimally Minimal   -  Neuroscience of Music – How Music Enhances Learning Through Neuroplasticity | Neuroscience News Research Articles | Neuroscience Social Network   -  Neurogenesis - Wikipedia, the free encyclopedia   -  Transparent Corporation   -  Less Empathy Toward Outsiders: Brain Differences Reinforce Preferences For Those In Same Social Group -- ScienceDaily   -  10 Tasty, Easy and Healthy Breakfast Ideas : zenhabits   -  Reconstructing visual experiences from brain activity evoked by natural movies - GallantLabUCB   -  Brain Facts and Figures   -  The Neuroscience of Emotions - YouTube   -  Brain Structures and Their Functions   -  30 Amazing Facts About Your Brain - A Daring Adventure   -  7 Ways to Enhance Focus, Creativity, Productivity and Performance | Psychology Today   -  THE BRAIN FROM TOP TO BOTTOM   -  What is the Self? - YouTube   -  www.girlmeetsbug.com   -  MIT discovers the location of memories: Individual neurons   -  Researchers show that memories reside in specific brain cells | MIT News Office   -  Le cerveau à tous les niveaux   -  NOT for the immature! Zionist Antichrist will rule the NWO - YouTube   -  Problem loading page   -  Brain is not fully mature until 30s and 40s   -  Know Your Neurons: How to Classify Different Types of Neurons in the Brain’s Forest | Brainwaves, Scientific American Blog Network   -  RABBIT FOOD FOR MY BUNNY TEETH   -  Neuropsychology - Wikipedia, the free encyclopedia   -  In the Shadow of Hegel: How Does Thought Arise Out of Matter? | Postcards from Žižek | Big Think   -  WHO | What are electromagnetic fields?   -  First map of the human brain reveals a simple, grid-like structure between neurons | ExtremeTech   -  The Neuroscience of Creativity and Insight | Think Tank | Big Think   -  How To Balance Your pH To Heal Your Body   -  3D Brain on the App Store