Is This Big Oil’s Next Secret Weapon? Reducing global carbon emissions to net zero “is the only way to go,” Shell’s chief executive Ben van Beurden said earlier this month, in yet another reminder from a top executive that Big Oil needs to produce and sell more energy with low carbon intensity. 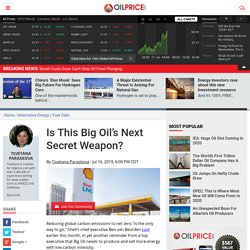 Oil majors are investing in various alternative energy solutions in response to increased investor pressure to start thinking about reducing emissions instead of just growing profits. Some supermajors are investing in EV charging networks, others in research and development of advanced lower-emissions technologies, and a few others are looking into hydrogen and its various possible uses as a clean fuel--not only for cars but also for heavy industries and home heating.

UK firms will face 'deliberate disruption' to hit zero carbon goal. UK companies must brace for the government to deliberately disrupt or phase out business areas that are unfit for a net zero-carbon economy, according to a report. 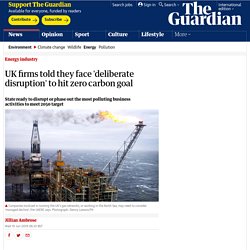 The UK Energy Research Centre (UKERC) has said many companies will face fundamental change, including the phasing out of the UK’s most polluting business activities. The government is to begin “purposefully disrupting” industries to spur the move to a zero-carbon economy, after voting through the 2050 target this month. Jim Watson, a director at the UKERC, said many companies were not ready for deliberate government-led disruption.

The truth about big oil and climate change - Big oil and the environment. IN AMERICA, THE world’s largest economy and its second biggest polluter, climate change is becoming hard to ignore. Ion age: why the future will be battery powered. Why have batteries become important? 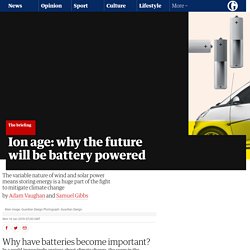 In a world increasingly anxious about climate change, the surge in the generation of renewable energy over the past 20 years offers a sliver of hope. But the variable nature of wind and solar power means that storing energy until consumers need it has become the next big challenge. And so, large-scale battery installations are springing up across electricity grids around the world, to make them more flexible. This breakthrough in a type of photosynthesis could provide the world with unlimited energy. Will 1.5 degrees Trigger a Death Spiral for Oil and Gas Companies? – Paul Gilding. It has always been clear that fixing climate change would require a massive industrial and technological transformation, with widespread social and economic consequences. 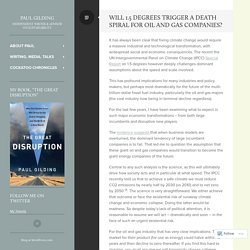 The recent the UN Intergovernmental Panel on Climate Change (IPCC) Special Report on 1.5 degrees however deeply challenges dominant assumptions about the speed and scale involved. This has profound implications for many industries and policy makers, but perhaps most dramatically for the future of the multi-trillion-dollar fossil fuel industry, particularly the oil and gas majors (the coal industry now being in terminal decline regardless).

Researchers Just Overcame a Key Barrier to Fusion Power. Fusion Cuisine One promising approach to nuclear power is a type of reactor called a tokamak, which uses powerful magnetic fields to trap super-heated plasma in a bagel-shaped torus. 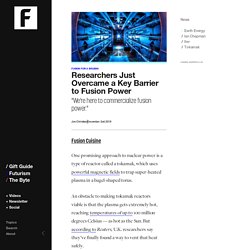 An obstacle to making tokamak reactors viable is that the plasma gets extremely hot, reaching temperatures of up to 100 million degrees Celsius — as hot as the Sun. But according to Reuters, U.K. researchers say they’ve finally found a way to vent that heat safely. Sg-mktg. Scientists Develop Liquid Fuel That Can Store The Sun's Energy For Up to 18 Years. No matter how abundant or renewable, solar power has a thorn in its side. There is still no cheap and efficient long-term storage for the energy that it generates. The solar industry has been snagged on this branch for a while, but in the past year alone, a series of four papers has ushered in an intriguing new solution. Scientists in Sweden have developed a specialised fluid, called a solar thermal fuel, that can store energy from the sun for well over a decade.

"A solar thermal fuel is like a rechargeable battery, but instead of electricity, you put sunlight in and get heat out, triggered on demand," Jeffrey Grossman, an engineer works with these materials at MIT explained to NBC News. Despite Trump and Rick Perry’s Best Efforts, Another Coal Plant Eats the Dust in Texas. Thu, Oct 4, 2018 at 1:33 pm CST Chalk this one up as another loss for the White House. 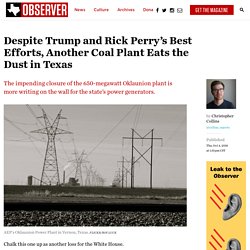 Last month, American Electric Power (AEP) announced that it would close its 650-megawatt power plant in Vernon, a rural community of 11,000 just south of the Texas-Oklahoma line, by September 2020. The closure of the Oklaunion Power Station is the latest in a string of shuttered coal-fired power plants across the state: Since 2011, at least six have been mothballed, scheduled for retirement or closed altogether, casualties of cheap natural gas and a booming renewables sector.

While it’s not shocking that another Texas coal plant has succumbed to market headwinds, it is somewhat surprising that Oklaunion was the latest casualty. Infographic: the outlook for self-generation - Future Present. Decentralized Microgridding Can Provide 90% of a Neighborhood's Energy Needs, Study Finds. A new report funded by the Dutch government finds that microgrid technologies could make a local “techno-economy” 90 percent self-sufficient, through the decentralised sharing of energy at the local level between multiple households. 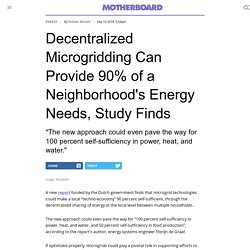 The new approach could even pave the way for “100 percent self-sufficiency in power, heat, and water, and 50 percent self-sufficiency in food production”, according to the report’s author, energy systems engineer Florijn de Graaf. If optimized properly, microgrids could play a pivotal role in supporting efforts to transition to renewable energy systems and meet climate targets, finds the report published by Netherlands-based energy systems company Metabolic. The report was funded by the Dutch Ministry of Economic Affairs and the Netherlands Enterprise Agency.

Under the Paris Agreement, the Dutch government has pledged to drop its carbon dioxide emissions by 80-95 percent by 2050. Subscribe to read. Subscribe to read. The Crunch # 53. The battery's next trick came last month, when the ancient dinosaurs that run the Australian energy market asked power generators to supply them with extra energy to help maintain the grid's frequency. 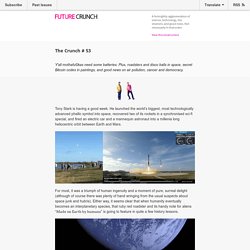 Usually the big gas generators, despite having way more capacity than required, charge prices that are up to ten times higher because they know they've got everyone over a barrel. If We Want the Price of Renewables to Drop, We Need to Pay to Get Rid of Carbon. In Brief A report by the International Renewable Energy Agency finds that by 2020, renewable energy will be less expensive than fossil fuels. 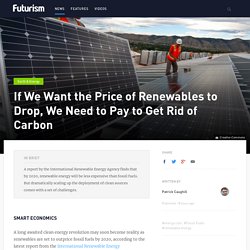 But dramatically scaling up the deployment of clean sources comes with a set of challenges. Smart Economics A long awaited clean energy revolution may soon become reality as renewables are set to outprice fossil fuels by 2020, according to the latest report from the International Renewable Energy Agency (IRENA). But as businesses show increasing interest in the promises of clean energy, governments need to step up too, says the agency in a separate analysis. Groundbreaking quark fusion generates 10 times as much energy as nuclear fusion. Physicists at Tel Aviv University and University of Chicago have discovered that quark fusion could be an even more energy-packed reaction than nuclear fusion. 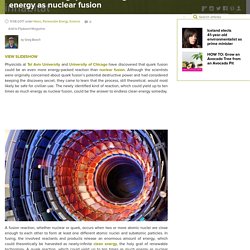 Although the scientists were originally concerned about quark fusion’s potential destructive power and had considered keeping the discovery secret, they came to learn that the process, still theoretical, would most likely be safe for civilian use. The newly identified kind of reaction, which could yield up to ten times as much energy as nuclear fusion, could be the answer to endless clean energy someday. A fusion reaction, whether nuclear or quark, occurs when two or more atomic nuclei are close enough to each other to form at least one different atomic nuclei and subatomic particles. In fusing, the involved reactants and products release an enormous amount of energy, which could theoretically be harvested as nearly-infinite clean energy, the holy grail of renewable technology.

Via Live Science/Engadget. Powering up: The biggest battery breakthroughs of 2017. Safety first The chances of lithium-ion batteries failing is very low, but with so many of them in use everyday the chances of something going wrong somewhere in the world are very real. Flaming Samsung smartphones and exploding "hoverboards" (we're still reluctant to call them that, but whatever) are evidence of that. The World Bank Will Stop Fossil Fuel Financing Beginning in 2019. Rippling Graphene Sheets May Be the Key to Clean, Unlimited Energy. Clean, Unlimited Energy Physicists at the University of Arkansas have invented a nano-scale power generator that could potentially use the movement of graphene to produce clean, unlimited energy. Called a Vibration Energy Harvester, this development provides evidence for the theory that two-dimensional materials could be a source of usable energy.

'We were blown away' - researchers eliminate obstacle to fusion energy. Fusion powers the sun, and if we could harness it here on Earth, we could obtain unlimited clean energy. Solid-state magnesium-ion batteries could lick lithium. Here's what your signals are saying about the future of energy. Energy-Generating Pavement Just Became a Reality in London. Meet the House That Can Produce More Energy Than It Consumes. In Brief The HouseZero project is taking a pre-1940s house and retrofitting it to be ultra-efficient, with zero carbon emissions, 100% natural ventilation and light and near-zero energy use. ExxonMobil Announces New Algae Biofuel Research. How a 94-Year-Old Genius May Save the Planet. Thin plastic overlayer doubles efficiency of rooftop solar panels. While the latest commercially available rooftop solar panels boast conversion efficiencies around the 18 to 20 percent mark, there are solar cells capable of achieving efficiencies of over 40 percent.

Compact spherical tokamak would be 100 times smaller than ITER and has a chance to start operating decades earlier. International Tokomak Fusion project delayed another ten years and will cost $4 billion euro more and their are better energy project choices. World Energy Mix in 2035 will have more nuclear because China will build it. Uk.businessinsider. X-ray breakthrough 'opens door' to controlled nuclear fusion. Wendelstein 7-X: The World's Largest Nuclear Fusion Reactor Comes to Life. What Will the U.S. Energy Industry Look Like Over the Next Five Years?