Green Gadgets. Log In. A growing backlash against globalization puts Apple and other big multinationals directly in the sightlines of two increasingly combative giants: the United States and China. 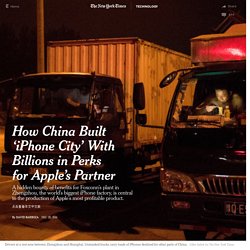 President-elect Donald J. Trump has vowed to bring down the full force of the government on American companies that move jobs overseas, threatening punitive tariffs on the goods they sell back at home. Apple has been a frequent target of Mr. 20 Staggering E-Waste Facts. It feels as if electronics were made to be thrown out every year, right? 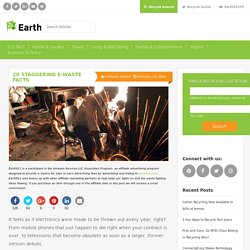 From mobile phones that just happen to die right when your contract is over, to televisions that become obsolete as soon as a larger, thinner version debuts. While the cost of constantly trying to keep up to date with the latest electronics is definitely steep on a household budget, there is a pretty hefty environmental cost, too, that comes along with e-waste. Most surprisingly of all, though, is the billions of dollars (literally) that goes into landfills each year by carelessly disposing of electronics. 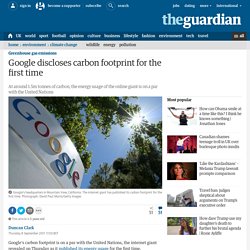 Google says that it emits 1.5m tonnes of carbon annually but claims that its data centres consume 50% less energy than the industry average. The emissions are slightly higher than the country of Laos in south-east Asia and equivalent to the UN's operational footprint. UN Global Compact. Data Centers. The virtual world is built on physical infrastructure. 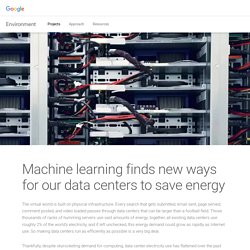 Every search that gets submitted, email sent, page served, comment posted, and video loaded passes through data centers that can be larger than a football field. Those thousands of racks of humming servers use vast amounts of energy; together, all existing data centers use roughly 2% of the world’s electricity, and if left unchecked, this energy demand could grow as rapidly as Internet use. Agbogbloshie - Kevin McElvaney. Agbogbloshie is a wetland and former recreation area in Accra (Ghana), which is surrounded by a river that streams through a lagoon straight into the Atlantic Ocean. 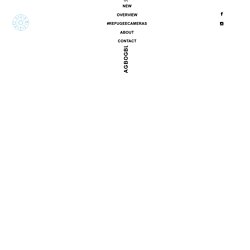 Before you enter the burning fields of Agbogbloshie, you will recognise the onion market. On one side you can buy cheap local fruits and vegetables and on the other side you will see loads of manufacturers and scrap dealers. Go to these scrap dealers and you will see men sitting on broken TVs smashing their hammers and simple tools against any kind of car parts, machines and electronic devices. Global Development Professionals Network. Recast of the WEEE Directive - Environment. Additional tools Waste of electrical and electronic equipment (WEEE) such as computers, TV-sets, fridges and cell phones is one the fastest growing waste streams in the EU, with some 9 million tonnes generated in 2005, and expected to grow to more than 12 million tonnes by 2020. 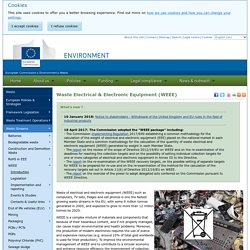 UK firm takes the cloud to chillier climes with Swedish data centre. A British private equity firm is following Facebook into the Swedish sub-Arctic, building a data centre aiming to tap the growing demand for energy-hungry computing capacity in the cloud. 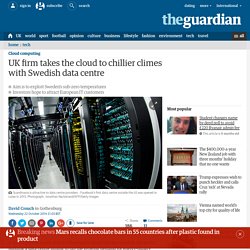 Hydro66, a data centre provider financed by Black Green Capital, is launching a new facility 70 miles from the Arctic circle in Boden, with the aim of housing high-powered computing equipment for corporate IT customers in Europe. CWIT Final Summary1. Business ethics and corporate social responsibility - Anglo American. Anglo American is one of the world”s leading mining companies. 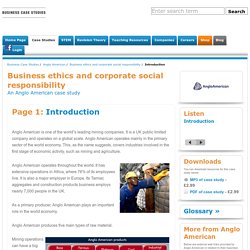 It is a UK public limited company and operates on a global scale. Anglo American operates mainly in the primary sector of the world economy. Recyclingtechnologies.co.uk. (UPDATE) Transforming Agbogbloshie: From Toxic Dump Into Model Recycling Center - The Pollution BlogThe Pollution Blog. UPDATE: June 2015. 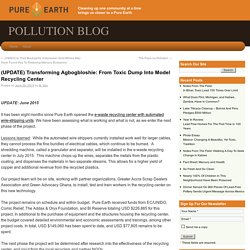 Sustainia - Exploring the Sustainable Society of Tomorrow. Basel Convention Home Page. EFFACE Illegal shipment of Waste from the EU. CWIT Project. Illegally Traded and Dumped E-Waste Worth up to $19 Billion Annually Poses Risks to Health, Deprives Countries of Resources, Says UNEP report. Geneva, 12 May 2015 - Up to 90 per cent of the world's electronic waste, worth nearly US $19 billion, is illegally traded or dumped each year, according to a report released today by the United Nations Environment Programme (UNEP). 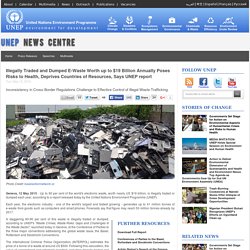 Up to 90% of world's electronic waste is illegally dumped, says UN. Up to 90% of the world’s electronic waste, worth nearly $19bn (£12bn), is illegally traded or dumped each year, according to the UN Environment Programme (Unep). Computers and smart phones are among the ditched items contributing to this 41m tonne e-waste mountain, which could top 50m tonnes by 2017, Unep says in a new report launched today in Geneva. It follows last month’s UN University report, which outlined how 42m tonnes of electronic waste were thrown out in 2014 at a cost of $52bn to the global economy. Exporting hazardous waste from EU and Organisation for Economic Co-operation and Development (OECD) Member States to non-OECD countries is banned.

Our FY14 work in Kenya, helping the country set up an e-waste recycling hub and collection network, showed us how we can help developing nations move from an informal recycling culture to a safe, formal industry takeback program supported by legislation. And the Environment. Guiyu waste dump: The Chinese tip where your old mobile phones and computers go to die [Photo report]

China's Electronic Waste Village. (UPDATE) Transforming Agbogbloshie: From Toxic Dump Into Model Recycling Center - The Pollution BlogThe Pollution Blog. Volunteer for Social Change. Agbogbloshie: the world's largest e-waste dump – in pictures. Karma Recycle Mobile. Nigerian recycling initiative proves it’s not all about hi-tech solutions. When it comes to climate change, we have the bad habit of focusing on the first part of the story, the part about the problem, and forgetting the second part about the many available solutions. These solutions are speeding up recycling, slowing down emissions and providing sustainable alternatives to plastic, air conditioning, smartphones and fast fashion. The Intergovernmental Panel on Climate Change is gathered in Copenhagen to present its latest report on the impacts and pace of climate change. Energy Efficiency, Data Centers. Environmental Issues > Energy Main Page > All Energy Documents Critical Action Needed to Save Money and Cut Pollution Data centers are one of the largest and fastest growing consumers of electricity in the United States.

In 2013, U.S. data centers consumed an estimated 91 billion kilowatt-hours of electricity -- enough electricity to power all the households in New York City twice over -- and are on-track to reach 140 billion kilowatt-hours by 2020.Some large server farms operated by well-known Internet brands provide shining example of ultra-efficient data centers. Data centers are the backbone of the modern economy -- from the server rooms that power small- to medium-sized organizations to the enterprise data centers that support American corporations and the server farms that run cloud computing services hosted by Amazon, Facebook, Google, and others.