Researchers improve efficiency of next-generation solar cell material. Perovskites are a leading candidate for eventually replacing silicon as the material of choice for solar panels. 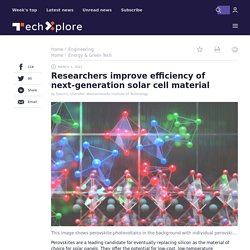 They offer the potential for low-cost, low-temperature manufacturing of ultrathin, lightweight flexible cells, but so far their efficiency at converting sunlight to electricity has lagged behind that of silicon and some other alternatives. Now, a new approach to the design of perovskite cells has pushed the material to match or exceed the efficiency of today's typical silicon cell, which generally ranges from 20 to 22 percent, laying the groundwork for further improvements.

By adding a specially treated conductive layer of tin dioxide bonded to the perovskite material, which provides an improved path for the charge carriers in the cell, and by modifying the perovskite formula, researchers have boosted its overall efficiency as a solar cell to 25.2 percent—a near-record for such materials, which eclipses the efficiency of many existing solar panels. These Anti-Solar Panels Don’t Require Daylight To Generate Power.

The Facts:A study from China, translated and archived in the CIA's electronic reading room, demonstrates the ability of a gifted girl to physically write on a piece of paper inside a closed container using nothing but her mind.Reflect On:How much do we really know about ourselves and what we are capable of? 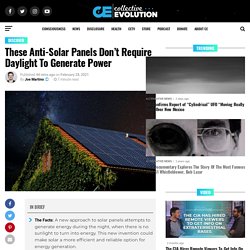 Take a moment and breathe. Place your hand over your chest area, near your heart. Breathe slowly into the area for about a minute, focusing on a sense of ease entering your mind and body. Black Gold material breakthrough! By Inés Urdaneta, Resonance Science Foundation Research Scientist Photo: Ethan Miller/Getty Images “Black” gold that harvests sunlight and uses it to turn carbon dioxide (CO2) into useful chemicals and fuel, has been developed by a team of researchers from India and Seoul. 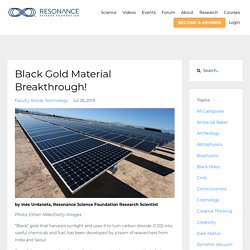 One of the most amazing things about nanomaterials, concerns their design properties. 3D Solar Panel Towers Increase Energy Output up to 20 Times. Sharing is caring! 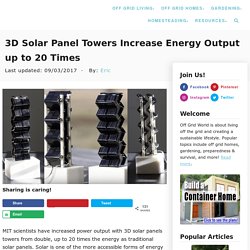 MIT scientists have increased power output with 3D solar panels towers from double, up to 20 times the energy as traditional solar panels. Solar is one of the more accessible forms of energy available to the average consumer looking to go off-grid. One of the remaining problems is efficiency. A typical solar panel is flat, and does best when sunlight is directly overhead being utilized by the entire surface area of the panel.

While some systems do allow the panels to tilt to use more direct sunlight as the day progresses, there is still a need for systems that produce more energy. Chemical that makes chilli peppers spicy boosts solar panel cells. By Karina Shah Jin Yang Solar cells treated with capsaicin – the compound that makes chilli peppers hot – have been found to be more efficient at converting solar energy. 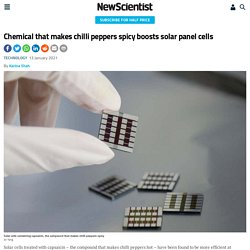 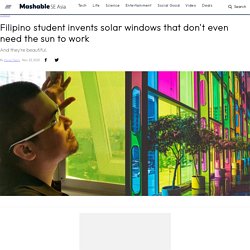 The James Dyson Award is an international design competition open to engineers from over 30 countries worldwide. It's run by The James Dyson Foundation, the name behind the insanely popular brand Dyson. The 27-year-old from The Philippines beat over 1,800 entries from other countries with his groundbreaking idea: AuREUS. What is AuREUS? New solar panel design could lead to wider use of renewable energy. Designing solar panels in checkerboard lines increases their ability to absorb light by 125 per cent, a new study says. 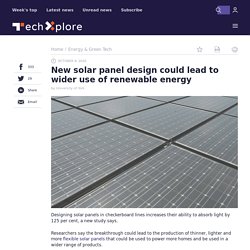 Researchers say the breakthrough could lead to the production of thinner, lighter and more flexible solar panels that could be used to power more homes and be used in a wider range of products. The study—led by researchers from the University of York and conducted in partnership with NOVA University of Lisbon (CENIMAT-i3N) - investigated how different surface designs impacted on the absorption of sunlight in solar cells, which put together form solar panels.

Scientists found that the checkerboard design improved diffraction, which enhanced the probability of light being absorbed which is then used to create electricity. The renewable energy sector is constantly looking for new ways to boost the light absorption of solar cells in lightweight materials that can be used in products from roof tiles to boat sails and camping equipment. Dr. Black silicon UV responses exceed 130% efficiency. "For the first time ever, we have direct experimental evidence that an external quantum efficiency above 100% is possible in a single photodiode without any external antireflection," says Hele Savin, associate professor of Micro and Nanoelectonics at Aalto University in Finland.

The results come just a few years after Savin and colleagues at Aalto University demonstrated almost unity efficiency over the wavelength range 250-950 nm in photodiodes made with black silicon, where the silicon surface is nanostructured and coated to suppress losses. Noticing some curious effects in the UV region, Savin's group extended their study of the devices to focus on this region of the electromagnetic spectrum. UV sensing has multiple applications, including spectroscopy and imaging, flame detection, water purification and biotechnology. While annual market demand for UV photodiodes is expected to increase to 30%, the efficiency of these devices has been limited to 80% at best. Genombrott för solkraft – kan ersätta fossilt bränsle. 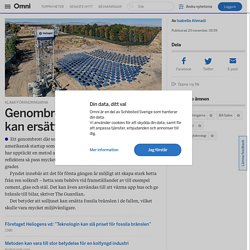 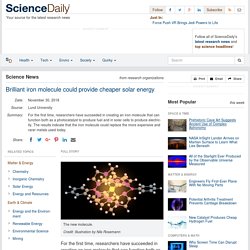 The results indicate that the iron molecule could replace the more expensive and rarer metals used today. Some photocatalysts and solar cells are based on a technology that involves molecules containing metals, known as metal complexes. The task of the metal complexes in this context is to absorb solar rays and utilise their energy. The metals in these molecules pose a major problem, however, as they are rare and expensive metals, such as the noble metals ruthenium, osmium and iridium. "Our results now show that by using advanced molecule design, it is possible to replace the rare metals with iron, which is common in the Earth's crust and therefore cheap," says Chemistry Professor Kenneth Wärnmark of Lund University in Sweden.

The study is now published in the journal Science. Scientists Have Created A Molecule That Can Store Solar Energy For 18 Years. Researchers say they have taken a key step forwards in making a molecule that can store solar energy. Publishing their latest findings in the journal Energy and Environmental Science, the team from Chalmers University of Technology in Sweden first showed off their solar-storing molecule last year.

Made from carbon, hydrogen, and nitrogen, the molecule is transformed into an “energy-rich isomer”, one made of the same atoms but bound in a different way, when it is hit by sunlight. The isomer can then be stored as a liquid, with the energy being used later. Scientists Develop Liquid Fuel That Can Store The Sun's Energy For Up to 18 Years. No matter how abundant or renewable, solar power has a thorn in its side. There is still no cheap and efficient long-term storage for the energy that it generates. The solar industry has been snagged on this branch for a while, but in the past year alone, a series of four papers has ushered in an intriguing new solution.

Scientists in Sweden have developed a specialised fluid, called a solar thermal fuel, that can store energy from the sun for well over a decade. "A solar thermal fuel is like a rechargeable battery, but instead of electricity, you put sunlight in and get heat out, triggered on demand," Jeffrey Grossman, an engineer works with these materials at MIT explained to NBC News. The fluid is actually a molecule in liquid form that scientists from Chalmers University of Technology, Sweden have been working on improving for over a year.

How Blockchain Could Give Us a Smarter Energy Grid - MIT Technology Review. On an electricity grid, electrons generated from the sun, wind, or other renewable sources are indistinguishable from those generated by fossil fuels. To keep track of how much clean energy is produced, governments around the world have created systems based on tradable certificates. Problem is, the way we manage these certificates “sucks,” and it’s holding up investment in renewable power, says Jesse Morris, an energy expert at the Rocky Mountain Institute.

A new system based on blockchain, the technology at the heart of Bitcoin and other digital currencies, could fix this, he says. Futurism - This solar paint will turn your house into a... Elon Musk: Tesla's Solar Roofs Will Be Cheaper Than Regular Roofs & Have "Infinity Warranty" In Brief Last night, Elon Musk announced that Tesla's solar roofs would be on sale starting today. At the time, he also stated that more information on the panels was forthcoming. Now, he has unveiled key details about Tesla's "infinity warranty. " Hot Solar Cells: 10 Breakthrough Technologies 2017 - MIT Technology Review. Availability: 10 to 15 years by James Temple Solar panels cover a growing number of rooftops, but even decades after they were first developed, the slabs of silicon remain bulky, expensive, and inefficient. Fundamental limitations prevent these conventional photovoltaics from absorbing more than a fraction of the energy in sunlight.

The device is an advanced solar cell, no bigger than a typical playing card, which is left floating in a pool of water. Then, much like a natural leaf, it uses sunlight to split the water into its two core components, oxygen and hydrogen, which are stored in a fuel cell to be used when producing electricity. Forget solar panels, optical ‘rectenna’ converts light directly to electricity. From Georgia Tech, a news release that we missed when it first came out, but still well worth talking about. First Optical Rectenna – Combined Rectifier and Antenna – Converts Light to DC Current Using nanometer-scale components, researchers have demonstrated the first optical rectenna, a device that combines the functions of an antenna and a rectifier diode to convert light directly into DC current.

This schematic shows the components of the optical rectenna developed at the Georgia Institute of Technology. (Credit: Thomas Bougher, Georgia Tech) Based on multiwall carbon nanotubes and tiny rectifiers fabricated onto them, the optical rectennas could provide a new technology for photodetectors that would operate without the need for cooling, energy harvesters that would convert waste heat to electricity – and ultimately for a new way to efficiently capture solar energy. “The physics and the scientific concepts have been out there,” said Cola. Elon Musk Announces That SolarCity Will Create a Roof Made Entirely of Solar Panels. Tata Steel to Turn Steel Sheets into Solar Cells Using Spray-on PV Coating. Cientistas australianos criam célula fotovoltaica 34,5% mais eficiente – CicloVivo. Startup cria placas fotovoltaicas que se camuflam às superfícies – CicloVivo.

This Hot Water System Can Save You Up to 80% on Energy Bills (Videos) New Printable Solar Panels Are Ready To Hit The Market! IBM Solar Collector Magnifies Sun By 2000X – These Could Provide Power To The Entire Planet. The Solar Sunflower: Harnessing the power of 5,000 suns. EWAO Nigerian Man Turns A VW Beetle Into A Solar And Wind Powered Car. Vascular Channels Based On Plant Leaves Allow For Self-Healing In New Solar Cells. A Seriously Bright Idea That's Giving An Amazing New Purpose To Something We Usually Throw Away. Solar-Powered LED Clothespins Light Up Urban Nights - WebEcoist. This glass sphere might revolutionize solar power on Earth. This solar panel printer can make 33 feet of solar cells per minute.