European elections 2019: Why adults are giving kids their vote. Image copyright Handout Lilly Platt is too young to vote in the upcoming European Parliament election. 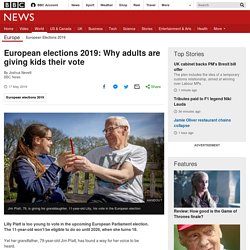 The 11-year-old won't be eligible to do so until 2026, when she turns 18. The Importance Of Foresight: Why Intuition And Imagination Will Be Critical In The Future Of Work. Getty In his book Thinking Fast and Slow, Daniel Kahneman refers to the parts of our brain, where he suggests there are two competing intelligence at play. 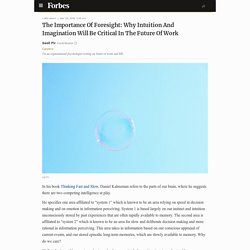 “The origin of civil government,” wrote David Hume in 1739, is that “men are not able radically to cure, either in themselves or others, that narrowness of soul, which makes them prefer the present to the remote.” 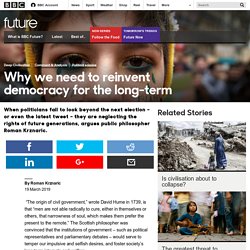 The Scottish philosopher was convinced that the institutions of government – such as political representatives and parliamentary debates – would serve to temper our impulsive and selfish desires, and foster society’s long-term interests and welfare. This article is part of a new BBC Future series about the long view of humanity, which aims to stand back from the daily news cycle and widen the lens of our current place in time. Fridays for Future South Africa – sustaining the spirit of Soweto '76. How the Global Tech Elite Imagine the Future. 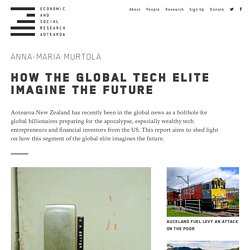 Ideas of the future matter because they condition action. This report asks what kinds of ideas of the future guide wealthy tech entrepreneurs in their investments and, in turn, what this might mean for the global future. Exploring these ideas in relation to the place of Aotearoa New Zealand in the imagination of this global technological and financial elite, the report outlines how escapist fantasies of the colonisation of remote locations have turned into a form of ‘apocalypse insurance’. But not everyone has the choice of hedging their bets on alternative futures. Aotearoa New Zealand has recently been in the global news for a quite unusual reason. The A.I. Diet. Meet the world's first 'minister for the unborn' Sophie Howe is a public servant with a particularly tricky constituency. 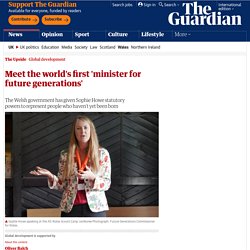 The people she represents are remote and unresponsive and they never show up to voice an opinion or tell her if she’s doing a good job. They don’t even vote. That’s because they haven’t yet been born. ‘You can track everything’: the parents who digitise their babies’ lives. You don’t need to spend much time in the presence of a small child and an iPhone to feel a little disconcerted. One-year-olds hypnotised by creepy Baby Shark ephemera on YouTube; two-year-olds who can swipe before they can talk; my own five-year-old trying to “pause” me when he goes to the loo. 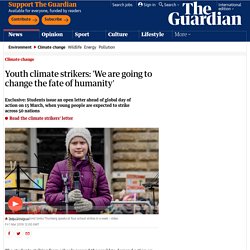 The letter, published by the Guardian, says: “United we will rise on 15 March and many times after until we see climate justice. We demand the world’s decision makers take responsibility and solve this crisis. TikTok Owner Musical.ly Fined $5.7 Million Over Child Privacy. 7 global trends for sustainability. Future of schools - Arup. Humanity + AI: Better Together. Using digital technologies to improve the design and enforcement of public policies. The new ecosystem of trust: how data trusts, collaboratives and coops can help govern data for the maximum public benefit. Which financial architecture can protect environmental commons? No hard feelings: Why environmental scholars can’t afford to dismiss children’s views of the good life. A Guide to DIYbio (updated 2019) – Elliot Roth. Almost Everything You Need to Know About “Biohacking” (with links) A long time ago at Thought For Food, I mentioned to Christine Gould that I should eventually write a post about biohacking, rounding up all of the facts that I could about how to get started teaching yourself the basic tenets of synthetic biology, setting up a laboratory space, starting a biotech business, common events, and resources you need to get started. 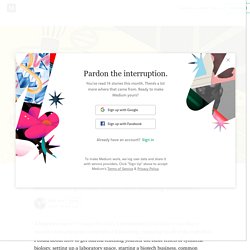 This is a primer with as much information as I could find on different aspects of the biohacking community. If you have additional information, please comment below and I will continue to update this guide with additional details. I am merely a single voice in a diverse community (and definitely have a US-centric bias), and merely a collector not an expert, so I welcome any input in the comments. Feel free to share this guide if you find it useful. UNIQLO’s founder plots a way to beat Zara and H&M - Back to basics. Wellbeing of New Zealanders at the heart of Budget priorities. Improving the wellbeing of current and future New Zealanders will be the focus of Budget 2019, Finance Minister Grant Robertson said on Thursday. 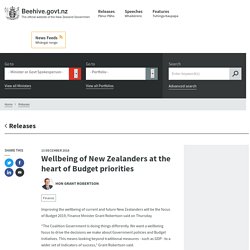 “The Coalition Government is doing things differently. We want a wellbeing focus to drive the decisions we make about Government policies and Budget initiatives. This means looking beyond traditional measures - such as GDP - to a wider set of indicators of success,” Grant Robertson said. “Under the Government’s wellbeing approach, the development of Budget priorities represents a new way of working and of thinking about how we develop our priorities as a Government, and measure our success as a country,” Grant Robertson said.

“Using the Treasury’s Living Standards Framework (LSF), evidence from sector-based experts and the Government’s Science Advisors, and with collaboration among public sector agencies and Ministers, we have identified five priorities for the Wellbeing Budget,” Grant Robertson said. The five Priorities for Budget 2019 are: Facing Up to a Four-Generation Society. A profound but mostly unrecognized demographic and economic trend is unfolding around the world right now. 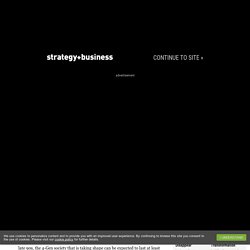 The average human life span is growing enough that for the first time in recorded history, four generations can routinely expect to be alive at the same time. To be sure, this trend is countered somewhat by the increasingly older ages at which many women give birth; in 2010, the mean age of mothers at the birth of their first child was 25 or higher in most industrialized countries. Even so, with more people living into their late 90s, the 4-Gen society that is taking shape can be expected to last at least one more generation, and probably much longer. Early Tests Show a New Technique Could Turn 25% of Our Plastic Waste Into Fuel. Reduce. Reuse. Recycle. It's not enough. When it comes to the crisis of mounting plastic waste, we're still coming up short on ways to plug the flow. Object moved. Why the UK is taking on social networks over child safety. 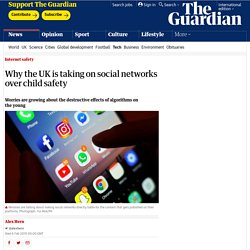 While all sides agree that protecting children online is of paramount importance, the calls have led to a tense conflict between larger social networks, who argue that they cannot be held to an expectation of perfection, and the government, which is increasingly threatening to redefine the roles of internet companies if they won’t act voluntarily. Iceland Moving onto Greener Pastures. Glossary.

Life-saving optimism: what the west can learn from Africa. Nigeria, like most African nations, has been taught and dictated to since its independence, largely seen by the rest of the world as a receptacle for ideas rather than a generator of them. But is there something the world could learn from us? During the past few weeks in Nigeria, I’ve interviewed some 40 strangers whose lives, like those of most people in the country, were mired in want and suffering. Everywhere, people ambled about sweating, their skins wearing gradations of deprivation. Some “new” governance models in Europe and the United States.

We have 12 years to limit climate change catastrophe, warns UN. The world’s leading climate scientists have warned there is only a dozen years for global warming to be kept to a maximum of 1.5C, beyond which even half a degree will significantly worsen the risks of drought, floods, extreme heat and poverty for hundreds of millions of people. The authors of the landmark report by the UN Intergovernmental Panel on Climate Change (IPCC) released on Monday say urgent and unprecedented changes are needed to reach the target, which they say is affordable and feasible although it lies at the most ambitious end of the Paris agreement pledge to keep temperatures between 1.5C and 2C. This clever AI hid data from its creators to cheat at its appointed task.

Depending on how paranoid you are, this research from Stanford and Google will be either terrifying or fascinating. Future - How Western civilisation could collapse. This story is featured in BBC Future’s “Best of 2017” collection. Recreation revolution: Why Wales enshrined kids' playtime in law. Most everyone knows that play is an essential part of a healthy childhood. The truth about big oil and climate change - Big oil and the environment. IN AMERICA, THE world’s largest economy and its second biggest polluter, climate change is becoming hard to ignore.

Extreme weather has grown more frequent. The World Might Actually Run Out of People. Exploring the future Ep5: Considering uncertainties in the future of infrastructure. Future - The invisible warning signs that predict your future health. Popular Music is Getting Sadder and Angrier, New Study Finds. An analysis of more than 50 years of song lyrics identifies a dark trend in popular music.

The False Choice Between Economic Growth and Combatting Climate Change. Generation Anthropocene: How humans have altered the planet for ever. We have 12 years to limit climate change catastrophe, warns UN. Ikea to sell refurbished furniture to boost culture of recycling. § 47 f “Participation of Children” in the Local Government Code (Gemeindeordnung) of the Federal State Schleswig-Holstein - futurepolicy.org.

Seven implications of complexity for organisations. This Is the Future of Learning and Development. Money can buy happiness — why government should invest in wellbeing. Can parents be trusted with gene editing technology? How summer camps and Scout groups turn children into citizens. Taking a fresh look at sustainability via a “leverage points perspective” – Relational Thinking. Green New Deal: When politics was trumped by the weathe... Time. The 10 most exciting robotics developments of the past 12.