Solar Panels Are Starting to Die, Leaving Behind Toxic Trash. 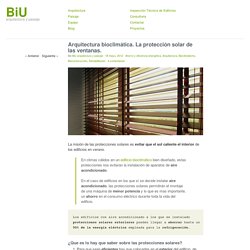 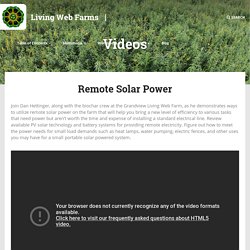 If you disagree, you will be re-directed to the home page, and will not be able to attend on-farm events. For the opportunity to participate in this workshop, conducted through Living Web Farms (“LWF”), I hereby grant to LWF and its successors, licensees, assigns, employees and/or agents (a) the right to photograph, record, tape, film and otherwise reproduce my likeness, voice, mannerisms, image, appearance and performance during my participation in the Workshop, and (b) the right to use my name, likeness, portrait or pictures, voice and biographical material about me.

LWF shall have the right to use such materials and information for educational, organizational and promotional purposes, and to exploit such materials and information in any and all media, including, without limitation, on LWF’s website. Additionally, I acknowledge that there is a risk of injury, which can result from my participation in the Workshop.

Backup Power is the Beginning of Living Off Grid - Renewable Energy. In recent months, we have seen the plight of millions of families as they struggle to cope without the power grid and this is becoming much more frequent. 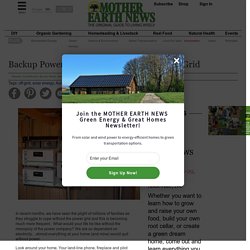 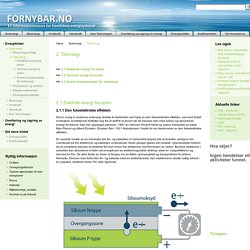 Solar Calculator. What happens to solar power when it isn't sunny? A simple question with an amazing answer. "How does solar energy work when there's no sun? 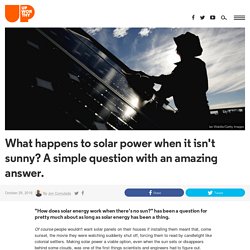 " has been a question for pretty much about as long as solar energy has been a thing. Of course people wouldn't want solar panels on their houses if installing them meant that, come sunset, the movie they were watching suddenly shut off, forcing them to read by candlelight like colonial settlers. Making solar power a viable option, even when the sun sets or disappears behind some clouds, was one of the first things scientists and engineers had to figure out. Photo by Andreas Rentz/Getty Images.

Passive Solar Heating Basics. Posted Categories: Construction Methods The very root of what makes a home green is how effectively it responds to its surrounding environment. 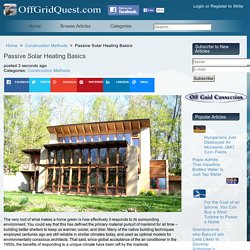 You could say that this has defined the primary material pursuit of mankind for all time – building better shelters to keep us warmer, cooler, and drier. Many of the native building techniques employed centuries ago are still reliable in similar climates today, and used as optimal models for environmentally conscious architects. That said, since global acceptance of the air conditioner in the 1950s, the benefits of responding to a unique climate have been left by the roadside. The principles of passive solar heating, such as basic types of systems, their description, and the components making up any passive system are presented in this course.

How Much does an Average Solar-Panel System Cost? If you’re shopping for a solar energy system, one of your first questions is probably, “how much will it cost?” 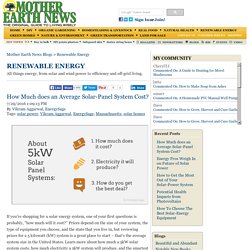 Prices depend on the size of your system, the type of equipment you choose, and the state that you live in, but reviewing prices for a 5 kilowatt (kW) system is a great place to start – that’s the average system size in the United States. Cool Solar Powered Inventions That Will Change The World. Gorgeous Energy-Absorbing Trap Light Never Needs to be Plugged In. Solar Shingles: Renewable Energy Solution With Curb Appeal. 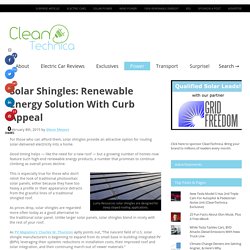 Nigerian Man Turns A VW Beetle Into A Solar And Wind Powered Car. This is one of the coolest ideas and to top it off it’s completely reasonable too! 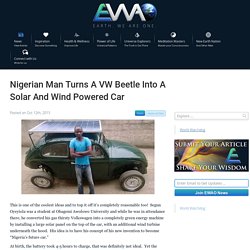 Segun Oyeyiola was a student at Obagemi Awolowo University and while he was in attendance there, he converted his gas thirsty Volkswagen into a completely green energy machine by installing a large solar panel on the top of the car, with an additional wind turbine underneath the hood. His idea is to have his concept of his new invention to become “Nigeria’s future car.” At birth, the battery took 4-5 hours to charge, that was definitely not ideal. Yet the largest challenge, according to Mr. Oyeyiola, was obtaining the best materials to use, and it didn’t help at all being surrounded by people telling him that he was wasting his time.

Check out this animation of a solar/wind-powered vehicle, illustrating how the batteries are charged via the multiple turbines. Under the hood of this bad boy boasts three wind turbines that transfer air into energy and is then stored in the main battery. Nikola Tesla - Solar Panels That Roll Out Like Carpet! New Catalyst Lets Us Store the Power of the Sun. In Brief Scientists have found a way to “crack” water three times more efficiently using solar- and wind-generated electricity, which means it’s possible to store renewable energy for later use. 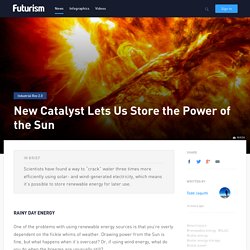 Rainy Day Energy One of the problems with using renewable energy sources is that you’re overly dependent on the fickle whims of weather. Drawing power from the Sun is fine, but what happens when it’s overcast? Or, if using wind energy, what do you do when the breezes are unusually still? Solar energy projects for Do It Yourselfers to save money and reduce pollution. World Trade Organization shutting down India's massive solar project is what's wrong with the world. Ground Mount Solar 400 Watt System. Off Grid Solar Living: Lessons in Energy Efficiency. This story is meant to provide information about off grid living, meant to teach you or inspire you. I get a lot of people that ask me ‘What’s it like to live off the grid?’ I think a lot of people picture us huddled around a candle in darkened cabin in the middle of the woods. South African team may have solved solar puzzle even Google couldn't crack.

It is a problem that has so far stumped even Google’s brainy engineers – how to generate cheap solar electricity using a small-scale array of mirrors to concentrate the sun’s energy. Now a team at a South African university – led by a former Intel strategic planner – believes they have cracked it. Once they have completed a prototype system in October they have big plans for rolling out the technology. 7th Grader mimics Nature. 13 year old copies Nature to Improve Solar Performance Thirteen year old Aidan Dwyer was walking in the woods in Upstate New York in the winter and noticed a spiral pattern to tree branches. Aidan realized the tree branches and leaves had a mathematical spiral pattern that could be shown as a fraction. After some research he also realized the mathematical fractions were the same numbers as the Fibonacci sequence.

"On the oak tree, the Fibonacci fraction is 2/5, which means that the spiral takes five branches to spiral two times around the trunk to complete one pattern. Other trees with the Fibonacci leaf arrangement are the elm tree (1/2); the beech (1/3); the willow (3/8) and the almond tree (5/13) The Solar Conundrum. The Solar Conundrum: heat decreases the production of electrical energy in PV. Hybrid Vacuum Tubes.By efficiently drawing heat away from the solar panel for space heating, hot water, de-salination and cooling the photovoltaic cells are maintained at an optimum operating temperature.

This results in significantly higher electrical output than standard photovoltaic panels. This type of device is commonly referred to as PVT. Both energy outputs are optimized replacing the need for two separate conventional panels (PV and Thermal), dramatically reducing installation time and cost whilst maximizing useable installation area. Through its unique patent pending design, V3Solar is able to concentrate up to 150X more sunlight on 1X sun mono PV without the cells overheating. Spherical Solar. Solar Sphere Concentrated photovoltaic (CPV) technology never looked so good. The Rawlemon Solar Energy Generator was a finalist in the World Technology Network Award Dec, 2013.

The inovative design is much more efficient than a flat pv panel as the round orb concentrates and tracks the sun's light. The inventor, German born, Barcelona-based architect André Broessel, with his first large scale prototype, which sits a top his Barcelona apartment building. The concentrator is essentially a giant glass orb on a robotic steel frame. Because of the concentration of light, the cell area under the water-filled orb is 75 to 95% smaller than a flat pvc with the same output. So Cool! SolarPod panels can be installed Without Drilling A Single Hole.

A recent press release reveals that the first-of-its-kind SolarPodTM has gotten UL certification. The SolarPodTM group of products is the first offer for US retail and commercial markets that provides no roof penetration, particularly helpful for sloped roofs (SolarPodTMCrown). The no-penetration SolarPod Crown cuts installation cost while at the same time achieving dependable reliability. SolarPodTM is completely modular, and quickly and easily integrates into your existing electrical system.

If your energy needs grow with your home or business, additional SolarPodsTM can be installed in series to the existing setup with minimal effort. The entire series only requires one 240V electrical hookup. The prefabricated quick install solar solution dramatically reduces utility scale and commercial installations. You can watch our easy installation videos. Healthy News and Information. By KRIS GUNNARS I love it when I learn new things from the comments people leave on my site. Problem loading page.

No TV, no WiFi, and no hot coffee in the morning. And we were the lucky ones; many were blacked out for over a week. Time for a backup plan. Solar Power Revolution - Here Comes The Sun. ‎99mpg.com/blog/makingasmallsolarc/ Is this the Breakthrough that Finally Kills 'Big Oil' and Brings Solar Power to the World? The days of bulky, expensive solar panels that were heavy and required harsh chemicals to produce and a lot of labor to install may be coming to an end. Solar Math. “Infinite Light” – Unlimited Solar Powered Light in a Bottle! First Off-Grid Solar Freezer (for Dummies) (14) Facebook. Not too bright – The 12 volt Tiny House Option. One aspect of construction that I neglected when building Tiny House Ontario was what I would do about electricity. To tell you the truth electricity scares me because it carries the power of fire.

Even so, I thought about it enough to know that I did not want to be on grid, and that I wanted to do it myself. 15kw Solar Power Plant. This is a big stack of mirrors, but look how simply the heat of the sun redirected can generate enough heat to power a 15kw Steam powered generator! Sunvention Sunpulse System at Tamera. 6 green things the U.S. military is doing: Solar-powered tents. Solar Thermal – An Old Concept for Today’s World. Some people think the concept of solar thermal is radically new. Truth is – people have been using the power of the sun for decades to provide hot water.