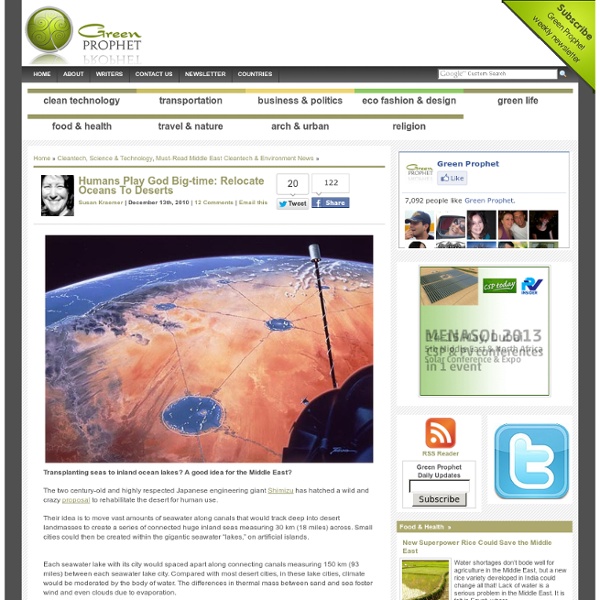 Transplanting seas to inland ocean lakes? A good idea for the Middle East? The two century-old and highly respected Japanese engineering giant Shimizu has hatched a wild and crazy proposal to rehabilitate the desert for human use. Their idea is to move vast amounts of seawater along canals that would track deep into desert landmasses to create a series of connected huge inland seas measuring 30 km (18 miles) across. Small cities could then be created within the gigantic seawater “lakes,” on artificial islands. Each seawater lake with its city would spaced apart along connecting canals measuring 150 km (93 miles) between each seawater lake city. A similarly massive water project initiated by Libya transfers fresh water from a distant underground aquifer. By contrast, this project uses seawater, already on the surface. The seawater itself in the lakes could support fish farming, which would bring a source of protein into arid deserts. Image:Shimizu Corporation ::Shimizu Corporation

Isaac Asimov’s 1964 Predictions About 2014 Are Frighteningly Accurate In 1964, famed science fiction writer Isaac Asimov ventured a guess at what you might find if you set foot inside the 2014 World’s Fair. Using his gift for envisioning future technology, Asimov’s predictions from 50 years out are both stunningly accurate and perhaps a little bit depressing. Here’s a look at what he got right. “One thought that occurs to me is that men will continue to withdraw from nature in order to create an environment that will suit them better.” “Kitchen units will be devised that will prepare “automeals,” heating water and converting it to coffee” “Complete lunches and dinners, with the food semiprepared, will be stored in the freezer until ready for processing.” “The appliances of 2014 will have no electric cords, of course” “Much effort will be put into the designing of vehicles with “Robot-brains” “Vehicles that can be set for particular destinations and that will then proceed there without interference by the slow reflexes of a human driver.” Buzzfeed.com Comments

Print - 110 Predictions For the Next 110 Years · People will be fluent in every language. With DARPA and Google racing to perfect instant translation, it won't be long until your cellphone speaks Swahili on your behalf. · Software will predict traffic jams before they occur. · Climate-controlled jackets will protect soldiers from extreme heat and cold. · Nanoparticles will make chemotherapy far more effective. · Electric cars will roam (some) highways. · Athletes will employ robotic trainers. · Bridges will repair themselves with self-healing concrete. · Digital "ants" will protect the U.S. power grid from cyber attacks. · Scrolls will replace tablets. Your Car Will Be Truly Connected As we branch out as a species, it's quite reasonable to think that we'll send 3D printers to other planets to print habitats for humans prior to our arrival. — Dave Evans, Chief Technology Officer and Resident Futurist, Cisco Systems · Your genome will be sequenced before you are born. 10 Things That Will Remain the Same · Passwords will be obsolete.

20 Furniture Marvels For The Futuristic Home Design will keep changing to suit the most current of trends, tastes and functionality needs of today’s buyers. The same can be evidently seen in mobile phones, PC keyboards, gaming consoles and even in mugs. These creative means to re-invent product designs as we know it are not lost in another important aspect of our daily life: home furniture. Granted some designs will look cooler and more comfortable than others, but pay extra attention to futuristic designs. This is why I’d like to highlight some futuristic designs in furniture that could possible grace our homes in the not-so-distant future. Read Also: Cool Futuristic/Concept Gadgets That Really Inspire Z. Concoon Bed Wasserbetten has taken design to new intergalactic heights and touched the rings of Saturn with this amazing bed using innovative technology, and incorporating a Yacht design. Innermost Asteroid Lamp Kure Family Dining Table Hi-Can High Fidelity Canopy EBB "Bathroom Furniture" Nuab Sofa Cloud Ecotypic Bed Exspoze Table i-Sopod

Immersive Cocoon // Step Into The Future Directed & 3D CG by Oliver Zeller, Video Courtesy of I-Cocoon The world of interfaces continues to evolve and surprise us. We still think of it as something we can hold, fold and place in our bag to carry anywhere. Image Courtesy of I-Cocoon The Immersive Cocoon opens its hatch silently and extends a small set of stairs that helps you move into this 360 degree display covering the entire interior walls. The Cocoon's potential extends beyond leisure and into education, productivity, training and other uses that would benefit from this immersive technology. sources: I-Cocoon, NAU