Manipulation of The People - Rudiments of Propaganda 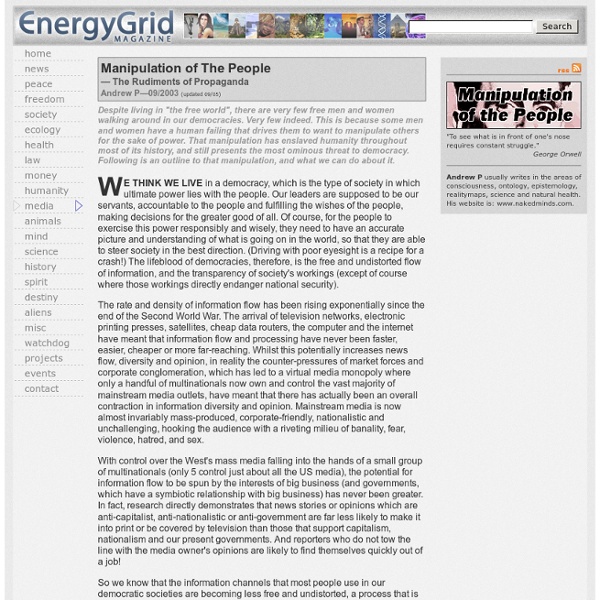 Despite living in "the free world", there are very few free men and women walking around in our democracies. Very few indeed. This is because some men and women have a human failing that drives them to want to manipulate others for the sake of power. That manipulation has enslaved humanity throughout most of its history, and still presents the most ominous threat to democracy. W E THINK WE LIVE in a democracy, which is the type of society in which ultimate power lies with the people. The rate and density of information flow has been rising exponentially since the end of the Second World War. With control over the West's mass media falling into the hands of a small group of multinationals (only 5 control just about all the US media), the potential for information flow to be spun by the interests of big business (and governments, which have a symbiotic relationship with big business) has never been greater. Our leaders don't care about democracy.

Interactive projector that turns any flat surface into a touch screen wins UK design award - Image 8 of 8 Light Touch transforms a projected image into a virtual 10-inch touch screen Image Gallery (8 images) Light Blue Opitcs (LBO) has won the Institution of Engineering and Technology (IET) Innovation Awards 2010 prize for Product Design with its Light Touch interactive projector. View all LBO’s proprietary holographic laser projection technology (HLP) was first reported on by Gizmag in 2009, while still in development. WiFi and Bluetooth connections enable wireless device-to-device communication. The HPL technology was awarded the Product Design Innovation Award for 2010 at the IET Innovation Awards (UK), as the judging panel felt that the product both fulfilled all of the major and most of the minor selection criteria for the award, and also believed it would lead to a wide range of potential applications and products. Post a CommentRelated Articles Just enter your friends and your email address into the form below For multiple addresses, separate each with a comma

You Are What You Post? Hunting the Elusive SuperIdentity (Q+A) So, we’ve had the internet for a good while now. Has it changed you? Maybe. How do you feel about the current stability of identity? In adults, identity, in the sense that it refers to ‘physical identity,’ is a fairly stable concept although the ways that we reveal our identity are diverse and expanding. In the real or physical world, we have good scientific exploration of the cues through which we reveal identity, and the reliability associated with these cues. The SuperIdentity project will explore cues to identity in both the real and the cyber world, and it may well be that the fluid nature of cyberidentity presents as a more challenging concept regarding confidence in identification decisions based on cues from this space. How did you come to this project? My own interest in identity stems from my background as an experimental psychologist working particularly with an interest in forensic issues. This is an interesting question and there are several issues within it. Is it real?

Body of Thought: How Trivial Sensations Can Influence Reasoning, Social Judgment and Perception Why do we look up to those we respect, stoop to the level of those we disdain and think warmly about those we love? Why do we hide dirty secrets or wash our hands of worries? Why do we ponder weighty subjects and feel a load lift after we have made a decision? Why do we look back on the past and forward to the future? Such turns of phrase, invoking a physical reality that stands in for intangible concepts, might seem like linguistic flights of fancy. But a rapidly growing body of research indicates that metaphors joining body and mind reflect a central fact about the way we think: the mind uses the body to make sense of abstract concepts. Select an option below: Customer Sign In *You must have purchased this issue or have a qualifying subscription to access this content

Khan Academy World Changing Ideas: 20 Ways to Build a Cleaner, Healthier, Smarter World What would happen if solar panels were free? What if it were possible to know everything about the world—not the Internet, but the living, physical world—in real time? What if doctors could forecast a disease years before it strikes? This is the promise of the World Changing Idea: a vision so simple yet so ambitious that its full impact is impossible to predict. Scientific American’s editorial and advisory boards have chosen projects in five general categories—Energy, Transportation, Environment, Electronics and Robotics, and Health and Medicine—that highlight the power of science and technology to improve the world. Some are in use now; others are emerging from the lab. The No-Money-Down Solar Plan Select an option below: Customer Sign In *You must have purchased this issue or have a qualifying subscription to access this content

Are we selling our souls to social networks? - opinion - 03 May 2012 IF YOU aren't paying for the product, you are the product. So runs the mantra of those who criticise huge internet companies like Facebook and Google. They argue that we have entered into a Faustian pact - trading personal information in exchange for seductively useful services. How concerned should we be? But the realisation that social networking sites can figure out details about us that we haven't actually told them (see "Mindreader: Facebook of revelations") makes the deal's merits harder to evaluate: the potential benefits and pitfalls are hard to grasp. New Scientist Not just a website! More From New Scientist What climate change has done to Walden's woods (New Scientist) Mysterious quasar casts doubt on black holes (New Scientist) 'Iron Man' plants are supercharged by nanotech power (New Scientist) Alien ocean (New Scientist) More from the web 99% of Gmail users don't know about this trick (Metro Chatter) Quantum computing: The next information revolution (Home | AAAS MemberCentral)