'Water war' threatens Syria lifeline. Gaziantep, Turkey - When severe water cuts began to hit Aleppo province in early May, residents started referring to a "water war" being waged at the expense of civilians. 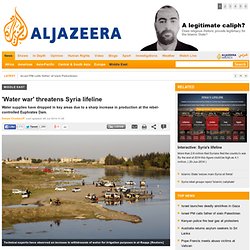 Images of beleaguered women and children drinking from open channels and carrying jerry cans of untreated groundwater only confirmed that the suffering across northern Syria had taken a turn for the worse. However, lost in the daily reports was a far more pernicious crisis coming to a head: a record six-metre drop in Lake Assad, the reservoir of Syria's largest hydroelectric dam and the main source of water for drinking and irrigation to about five million people. Under the watch of the Islamic State group - formerly known as the Islamic State of Iraq and the Levant (ISIL) - levels in Lake Assad have dropped so low that pumps used to funnel water east and west are either entirely out of commission or functioning at significantly reduced levels.

RELATED: Baghdadi's vision of a new caliphate. Rationing water in a thirstier world - Opinion. The right to water and sanitation is recognised in international law, but it is often left up to each local community's initiative to secure that right. 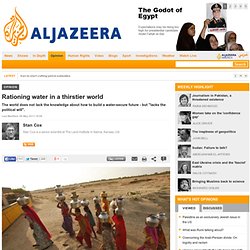 And a village in the Thar Desert of western India has recently been singled out by The Hindu newspaper for its exemplary water rationing system: In Kalyanpur village of Barmer, one of the most parched and barren districts of Rajasthan, the villagers have found a solution to their water woes in water rationing. There are no fights over water distribution, no quarrels over breaking the queues or attempts at snatching other people's share of water… [the village's well] is a blessing in the barren zone for its water is very sweet and light, devoid of fluoride or other contaminations … [A steering committee has] laid down rules after assessing needs of the 1,100 families in Kalyanpur, said Loon Chand, secretary of the committee. Each family's share is about 4,000 litres per month. Efficiency against fairness. Water campaign. Water wars: 21st century conflicts? Click on the water conflict map to see some of Al Jazeera's coverage of an issue which could define 21st century strife The author Mark Twain once remarked that "whisky is for drinking; water is for fighting over" and a series of reports from intelligence agencies and research groups indicate the prospect of a water war is becoming increasingly likely. 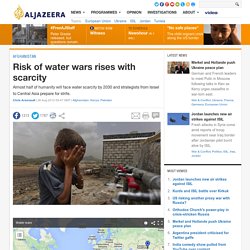 In March, a report from the office of the US Director of National Intelligence said the risk of conflict would grow as water demand is set to outstrip sustainable current supplies by 40 per cent by 2030. "These threats are real and they do raise serious national security concerns," Hillary Clinton, the US secretary of state, said after the report's release. Internationally, 780 million people lack access to safe drinking water, according to the United Nations. Some analysts worry that wars of the future will be fought over blue gold, as thirsty people, opportunistic politicians and powerful corporations battle for dwindling resources.

How India's cities came to drown in sewage and waste. Almitra Patel, a civil engineer by qualification, says she was first alerted to India's huge problem of inadequate waste disposal when she noticed that the frogs in the marshlands near her farmhouse, on the city's outskirts, had stopped croaking. 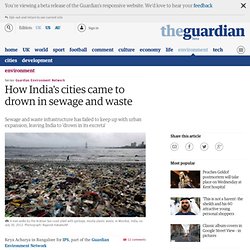 Seeing that the frogs had died from sewage and garbage being dumped in the wetlands, she petitioned the Supreme Court in 1996 to intervene and get the city fathers to take responsibility for safe waste handling. Investigations showed that less than half of the sewage produced by this global information technology hub was being managed in modern treatment plants, with the rest ending up as raw, untreated sewage in the city's lakes and wetlands. Patel won her suit to make the safe disposal of waste a municipal responsibility, but management of solid waste and sewage remains a national problem. Bangalore's municipality recently collected funds to clean and conserve its once-splendid wetlands, now shrunk from 262 in 1962 to just 17 in number. BOTTLED LIFE – Die Wahrheit über Nestlés Geschäfte mit Wasser.

Fracking Hell: The Untold Story. Food & Water Watch Works to Keep Water a Public Resource. Around the world, multinational corporations are seizing control of public water resources and prioritizing profits for their stockholders and executives over the needs of the communities they serve. 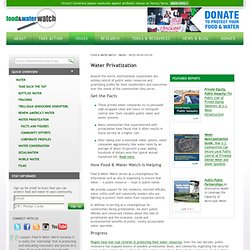 These private water companies try to persuade cash-strapped cities and towns to relinquish control over their valuable public water and sewer systems.Many communities that experimented with privatization have found that it often results in worse service at a higher cost.After taking over a municipal water system, water companies aggressively hike water rates by an average of about 10 percent a year, adding hundreds of dollars onto the typical annual household bill.

Read more. Food & Water Watch serves as a clearinghouse for information and an ally in organizing to ensure that water — a public resource — stays in public hands. We provide support for the residents, elected officials, water utility staff and community leaders who are fighting to protect their water from corporate control.