Nano(3sat): Natronlaugeheizung - Solarkraft aus dem Sommer im Winter zum Heizen verwenden. Scientists Develop Liquid Fuel That Can Store The Sun's Energy For Up to 18 Years. No matter how abundant or renewable, solar power has a thorn in its side. There is still no cheap and efficient long-term storage for the energy that it generates. 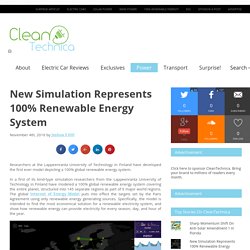 In a first of its kind-type simulation researchers from the Lappeenranta University of Technology in Finland have modeled a 100% global renewable energy system covering the entire planet, structured into 145 separate regions as part of 9 major world regions. The global Internet of Energy Model puts into effect the targets set by the Paris Agreement using only renewable energy generating sources. Just 90 companies caused two-thirds of man-made global warming emissions. The climate crisis of the 21st century has been caused largely by just 90 companies, which between them produced nearly two-thirds of the greenhouse gas emissions generated since the dawning of the industrial age, new research suggests. 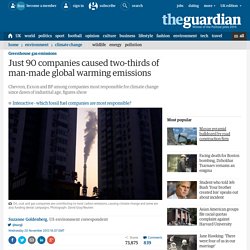 The companies range from investor-owned firms – household names such as Chevron, Exxon and BP – to state-owned and government-run firms. The analysis, which was welcomed by the former vice-president Al Gore as a "crucial step forward" found that the vast majority of the firms were in the business of producing oil, gas or coal, found the analysis, which has been published in the journal Climatic Change.

"There are thousands of oil, gas and coal producers in the world," climate researcher and author Richard Heede at the Climate Accountability Institute in Colorado said. Mark Jacobson: Barriers to 100% Clean Energy are Social and Political, Not Technical or Economic. As world leaders prepare to gather in Paris for a landmark climate summit, a new analysis from Stanford University and University of California researchers lays out roadmaps for 139 countries, including the world’s major greenhouse gas emitters, to switch to 100 percent clean, renewable energy generated from wind, water and sunlight for all purposes by 2050. 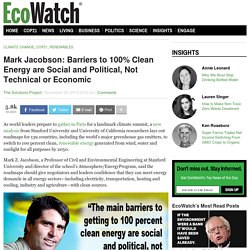 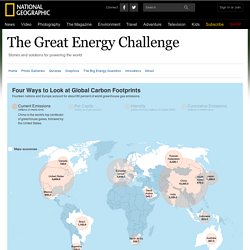 For current emissions, per capita emissions, and intensity, the data are measured in tons of "carbon dioxide equivalent. " That is, they include carbon dioxide and five other greenhouse gases (methane, nitrous oxides, hydrofluorocarbons, perfluorocarbons, and sulfur hexafluoride) as measured by their global warming potential. Cumulative emissions are measured in tons of carbon dioxide only. The emissions of Brazil and Indonesia may be understated because the numbers do not include calculations on land use change and forestry.

There are high uncertainties in current measures of deforestation's contribution to greenhouse gas emissions, as international authorities work to develop a consistent methodology. Carbon dioxide levels hit historic high - Americas. The level of carbon dioxide in the atmosphere has broken above a symbolic threshold, 400 parts per million (ppm), for the first time, US monitors have said, indicating a record level for greenhouse gases. 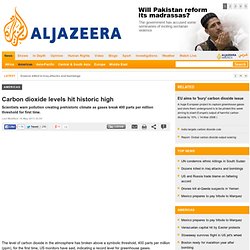 Climate scientists said the findings should serve as a call for action to reverse the damage caused by human activities and heavy use of polluting fossil fuels. The Earth has not had these levels of carbon dioxide in millions of years, said Bob Ward, policy and communications director at the Grantham Research Institute on Climate Change and the Environment at London School of Economics and Political Science. "We are creating a prehistoric climate in which human societies will face huge and potentially catastrophic risks," Ward said. "Only by urgently reducing global emissions will we be able to bring carbon dioxide levels down and avoid the full consequences of turning back the climate clock.

" 'Abrupt increase' Global temperatures hotter. Co-operation in a world of scarce resources. Santa Rosa, CA - From competition among hunter-gatherers for wild game to imperialist wars over precious minerals, resource wars have been fought throughout history; today, however, the competition appears set to enter a new - and perhaps unprecedented - phase. 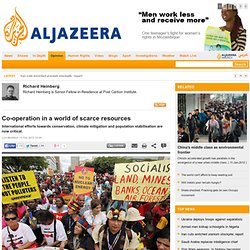 As natural resources deplete, and as the earth's climate becomes less stable, the world's nations will likely compete ever more desperately for access to fossil fuels, minerals, agricultural land and water. Nations need increasing amounts of energy and materials to produce economic growth, but the costs of supplying new increments of energy and materials are burgeoning. Collaboration Enterprise. Climate change is upon us and we must act. Firefighters battling the Rim Fire near Yosemite National Park, California, blamed on global warming. 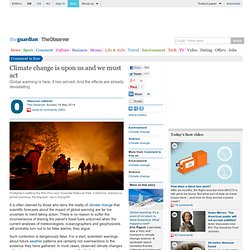 Photograph: Jae C Hong/AP It is often claimed by those who deny the reality of climate change that scientific forecasts about the impact of global warming are far too uncertain to merit taking action. There is no reason to suffer the inconvenience of leaving the planet's fossil fuels unburned when the current analyses of meteorologists, oceanographers and geophysicists will probably turn out to be false alarms, they argue. Such contention is dangerously false. For a start, scientists' warnings about future weather patterns are certainly not overreactions to the evidence they have gathered. There is another, more straightforward reason to repudiate deniers' claims about scientists' "false alarms", however. Annuaire national des AMAP. The ultimate climate change FAQ. Green versus gray: Nature's solutions to infrastructure demands - Opinion.

The Secret of the Seven Sisters - Oil cartel. On August 28, 1928, in the Scottish highlands, began the secret story of oil. 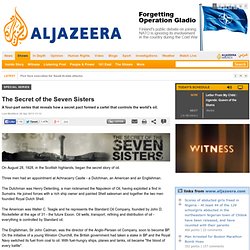 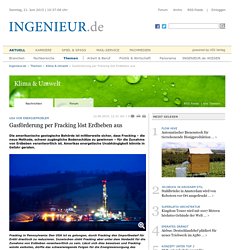 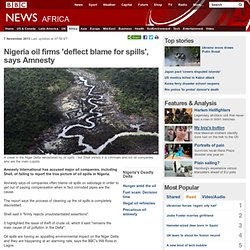 Amnesty says oil companies often blame oil spills on sabotage in order to get out of paying compensation when in fact corroded pipes are the cause. The report says the process of cleaning up the oil spills is completely discredited. Offshore-Ölförderung in der Tiefsee und der Arktis: Tiefer, kälter, riskanter - Übersicht Nachrichten. Das Inferno begann um 21 Uhr 49 am 20. The Guina Advantage - Beyond the edge - Guina Energy Group. List of emerging technologies.