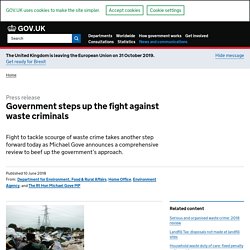 Their activity cost the English economy more than £600 million in 2015 and the review announced by the Environment Secretary today is the next step in the government’s ongoing work to tackle the crime - which is already a serious offence with tough penalties. A Call for Evidence launched today (10 June) will enable a wide group of people to have their say on ways to crack-down further on Organised Crime Groups (OCGs), who profit from waste crime. The review will be chaired by Lizzie Noel, a Non-Executive Director at Defra. Environment Secretary, Michael Gove, said: Organised criminals running illegal waste dumps and fly-tipping are blighting local communities. The review will: Minister of State for Security and Economic Crime, Ben Wallace, said: Why the world’s recycling system stopped working. As Robert Reed examines a mountain of trash piled three storeys high, a thin white plastic bag catches his eye. 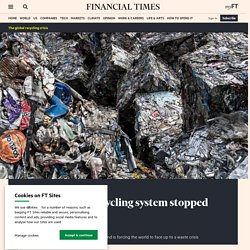 He fishes it out and holds it up. “That is a problem plastic,” he says gravely. “These get stuck in the machines, and there is no market for them.” He gives it a little wave and lets it float back down on to the heap. UK plastics recycling industry under investigation for fraud and corruption. The plastics recycling industry is facing an investigation into suspected widespread abuse and fraud within the export system amid warnings the world is about to close the door on UK packaging waste, the Guardian has learned. 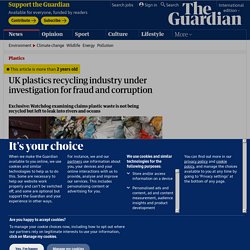 The Environment Agency (EA) has set up a team of investigators, including three retired police officers, in an attempt to deal with complaints that organised criminals and firms are abusing the system. Six UK exporters of plastic waste have had their licences suspended or cancelled in the last three months, according to EA data. One firm has had 57 containers of plastic waste stopped at UK ports in the last three years due to concerns over contamination of waste. Allegations that the agency is understood to be investigating include: UK households and businesses used 11m tonnes of packaging last year, according to government figures.

“We have flagged this and they are aware of it,” he said. India's plastic waste crisis is too big, even for Modi. India generates nearly 26,000 tonnes of plastic waste every day, making it the 15th biggest plastic polluter globally. 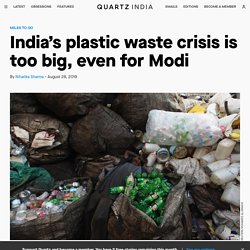 Discarded plastic waste litter the country’s roads, rivers and also form huge mounds in garbage dumps across the country. “The rubbish dump I frequent is filled mostly with plastic,” Ram Kumar, a ragpicker in Noida, near New Delhi, told Quartz. “Bottles, containers, and polythene bags are some of the items I routinely gather from here (to sell to recyclers).” WasteDataFlow Waste Management. SD — Publications. Bug hunt: Volunteers needed to spot insect's 'spittle' Media playback is unsupported on your device Ever seen a blob of foam on a plant and wondered how it got there? 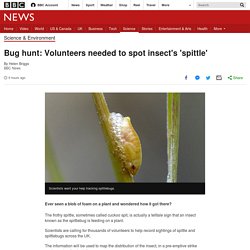 The frothy spittle, sometimes called cuckoo spit, is actually a telltale sign that an insect known as the spittlebug is feeding on a plant. Scientists are calling for thousands of volunteers to help record sightings of spittle and spittlebugs across the UK. The information will be used to map the distribution of the insect, in a pre-emptive strike against a deadly plant disease. Xylella has struck several EU countries, blighting olive groves in southern Italy. Image copyright Getty Images. Plastic Pollution. Competition Overview - Innovation Funding Service. NGO-Shipbreaking-Platform-Stats-Graphs-2017-List.

New UN agreement aims to tackle shipping emissions, which are bigger than all of Germany's. The vast majority—roughly 90%—of all internationally traded goods get to where they’re going by sea. 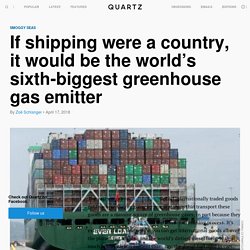 The ships that transport these goods are a massive source of greenhouse gases, in part because they use “bunker fuel,” the dregs of the fossil-fuel refining process. It’s extremely cheap, one reason you can get international goods all over the planet. But it’s also one the world’s dirtiest diesel fuels, with a much higher carbon content than, say, the diesel fuel used in cars. That’s more than the annual CO2 emissions of Germany, the sixth biggest emitter by country (775 million metric tons in 2016). Resource. Log in. Subscribe to read. Scottish housebuilder unveils waste plastic road. Gate Fees Report 2018: comparing the costs of waste treatment options. WRAP Gate Fees 2018 Report Map. NGO-Shipbreaking-Platform-Stats-Graphs-2017-List.

WEF_The_New_Plastics_Economy. Plastic Pollution: Floating Parks Made From Recycled Material Could Help Tackle Waste Crisis. The equivalent of one truck of plastic waste is dumped into the ocean every minute, but what if it could be caught and removed before it drifted out to sea? 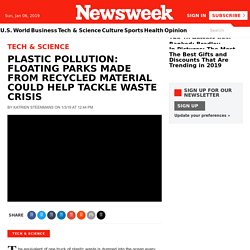 One such solution, called the Recycled Park Project, is being floated in Rotterdam, The Netherlands. MacRebur. Recycled plastic road surface trialled by Enfield Council. Enfield Council is on the road to greener infrastructure with the news that it has begun road resurfacing using asphalt made from recycled plastics. 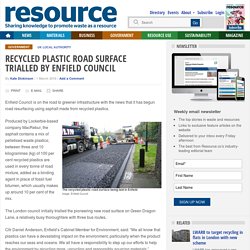 Produced by Lockerbie-based company MacRebur, the asphalt contains a mix of pelletised waste plastics; between three and 10 kilogrammes (kg) of 100 per cent recycled plastics are used in every tonne of road mixture, added as a binding agent in place of fossil fuel bitumen, which usually makes up around 10 per cent of the mix. The London council initially trialled the pioneering new road surface on Green Dragon Lane, a relatively busy thoroughfare with three bus routes. Cllr Daniel Anderson, Enfield’s Cabinet Member for Environment, said: “We all know that plastics can have a devastating impact on the environment, particularly when the product reaches our seas and oceans. We all have a responsibility to step up our efforts to help the environment by recycling more, upcycling and responsibly sourcing materials.”

Plastic Road - A revolution in building roads. Road makers turn to recycled plastic for tougher surfaces - Recycling. Index.cfm?fuseaction=search. The EU aims to minimise the risks associated with managing waste through rules for waste management and targets for the recovery of waste materials. 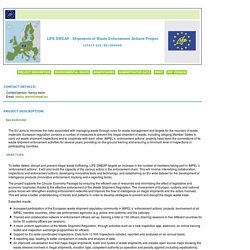 European regulation contains a number of measures to prevent the illegal shipment of waste, including obliging Member States to carry out waste shipment inspections and to cooperate with each other. International Trading Exchange Inc. Tackling the plastics problem - UK Research and Innovation. WEF_The_New_Plastics_Economy. We found UK plastic waste in illegal dump sites in Malaysia.

For years, most of this material went to China. 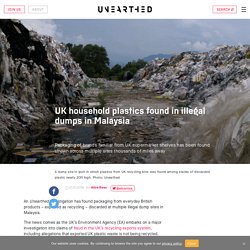 Inside each freighter, however, one cargo is the same: the heavy fuel oil that drives their engines and winds up in the air as exhaust. Cargo ships are significant sources of air pollution globally, and their fuel oil is largely responsible. A Chinese ban on rubbish imports is shaking up the global junk trade - Exit the dragon. ON THE FIRST day of 2018, a huge shock hit the global recycling industry. China, which is the world’s biggest scrap importer, stopped accepting virtually any recycled plastic and unsorted scrap paper from abroad, and severely curbed imports of cardboard.

The amount of recovered material that America, the world’s biggest exporter of scrap, sent to China was 3m tonnes less than in the first half of 2018 than a year earlier, a drop of 38%. China plans to phase in bans on most other rubbish, of which it imports $24bn-worth a year. At recycling plants across the Western world, bales of mixed paper and polymers now languish in forecourts awaiting offers. UK plastics recycling industry under investigation for fraud and corruption. Turkey’s plastic waste imports from the UK are booming – but at what cost?

Itinerant garbage pickers run down the hilly streets of Istanbul, their trolleys packed with plastic and other waste. Their haul is a boon for the recycling industry in Turkey. “We collect 80% of the waste from the streets,” said Recep Karaman, head of the street waste collectors association. But imports of plastic waste from the UK are increasing, and Karaman says it could damage the income he and his colleagues earn from garbage picking. Plastic recycling industry's problems costing councils up to £500,000 a year. Major problems in the plastic recycling industry are costing local councils in England up to £500,000 extra a year, as they struggle to deal with the continuing fallout from import bans imposed by countries who are no longer able to take the UK’s waste. A survey by the Local Government Association (LGA) revealed nearly half of councils who responded (52) say China’s ban is having a significant impact on their ability to collect and recycle plastic, due to rising costs.

Fourteen councils across the country say their recycling costs have increased by an average of half a million pounds a year, in part because of rising processing charges per tonne. “It’s clear that the ban by China on imported waste, which could soon be implemented by other countries, could have a marked impact on councils’ ability to recycle,” said Martin Tett, environment spokesman for the LGA.

Amazon.co.uk: Low Prices in Electronics, Books, Sports Equipment & more. Scottish firm Cuantec pioneers green food wrapping alternative. A SCOTTISH biotech firm is poised to seek regulatory approval for a revolutionary new food wrapping film which could drastically reduce non-recyclable food packaging waste. Cuantec, based in Motherwell, will seek approval next year for its antimicrobial food packaging material, which is derived from chitosan, a biopolymer used in glues and dyes, based in a substance found in langoustine shells.

Financial institutions buying into mandate for safer shipbreaking practices. In January, Norway’s Government Pension Fund Global, the world’s largest sovereign wealth fund, announced it would stop investing in four shipping lines. Hellenic Shipping News Worldwide. Why the Norwegian oil fund blacklisted carriers for beaching. Severe pollution, deadly working conditions and the use of child labor during the dismantling of vessels spurred Norway's Government Pension Fund Global (GPFG) to blacklist four carriers. The fund announced Tuesday that it has ditched its investments in four carriers because they have scrapped vessels on the beaches in Pakistan and Bangladesh, harming the environment and putting workers' health at risk.

There are better ways to scrap vessels available to the company, but they cost more" Seatrade Convicted for Beaching Ships. Shipping's financiers turning the tide on shipbreaking practices. LONDON (Reuters) - The shipping industry has long been criticised by campaigners for allowing vessels to be broken up on beaches, endangering workers and polluting the sea and sand.

Now, it is being called to account from a quarter that may have a bit more clout - its financial backers. Norway’s $1 trillion Oil Fund, a leader in ethical investing, in February sold its stake in four firms because they scrap on the beach. Shipbreaking bad: Inside the murky world of ship recycling. On a muddy beach near central Chittagong, Bangladesh’s second largest city, workers dressed in shirts and sandals use blowtorches to break apart the skyscraper-sized ships that tower over them. Scientists calculate impact of China's ban on plastic waste imports. UK to overhaul waste export practices following China ban - World. China ban: Thailand moves to send poor quality plastic waste back where it came from. Subscribe to read. China's plastic waste ban to result in landfill overuse, pollution. How China’s plastic waste ban has left Japan to deal with mountains of trash. China Trash Ban Creates Crisis for US Recyclers. Just less than $6 billion worth of U.S. waste was sent to China last year to be converted into packaging and products, and then shipped back to the United States and other markets.

MEEAnnouncement20182019BannedItems. The Chinese import ban and its impact on global plastic waste trade. Sharuddin_2018_IOP_Conf._Ser.%3A_Mater._Sci._Eng._334_012001. Scottish Institute For Remanufacture. How plastics made from plants could be the answer to the world's waste problem. This Startup's Simple Chemical Process Could Break Down the Plastics We Can't Recycle. Scientists accidentally create mutant enzyme that eats plastic bottles. NGO Shipbreaking Platform (@NGOShipbreaking)