How a 94-Year-Old Genius May Save the Planet. Photo Credit: Sunny studio / Shutterstock.com A man old enough to be Mark Zuckerberg’s great-grandfather just unveiled energy storage technology that might save the planet. 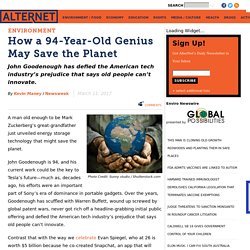 John Goodenough is 94, and his current work could be the key to Tesla’s future—much as, decades ago, his efforts were an important part of Sony’s era of dominance in portable gadgets. Over the years, Goodenough has scuffled with Warren Buffett, wound up screwed by global patent wars, never got rich off a headline-grabbing initial public offering and defied the American tech industry’s prejudice that says old people can’t innovate. Contrast that with the way we celebrate Evan Spiegel, who at 26 is worth $5 billion because he co-created Snapchat, an app that will probably impact humanity over the long run as profoundly as Cap’n Crunch cereal.

Maybe. End of Gas-Powered Cars? Battery technology may not make you swoon, but it is the missing link in getting the planet off carbon-based energy. Thin plastic overlayer doubles efficiency of rooftop solar panels. While the latest commercially available rooftop solar panels boast conversion efficiencies around the 18 to 20 percent mark, there are solar cells capable of achieving efficiencies of over 40 percent. 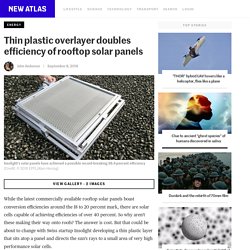 So why aren't these making their way onto roofs? The answer is cost. But that could be about to change with Swiss startup Insolight developing a thin plastic layer that sits atop a panel and directs the sun's rays to a small area of very high performance solar cells. While some researchers are devoted to improving the efficiency of solar cells themselves, other efforts to increase energy output involve developing systems that focus as much sunlight onto the cells as possible. Secure, transactional control of utility systems. It's the end of the fossil fuel era as we know it. Contrary to what the fossil fuel industry may want you to believe, the transformation of the world's energy supply to clean energy sources is well underway, according to a new report from Bloomberg New Energy Finance (BNEF). 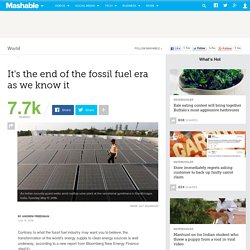 The "New Energy Outlook" report, released Monday, finds that at least $11.4 trillion will be invested in new power-generating capacity over the next 25 years, and 60 percent of that will fund wind and solar power. According to the report, we'll reach a tipping point in 2027, when new wind and solar power actually become cheaper than running existing coal and gas generators in much of the world. Cheapest power in 2030: solar PV. The world is about a decade away from reaching the point of "peak fossil fuels" in the electricity-generation sector, after which less will be burned each subsequent year. 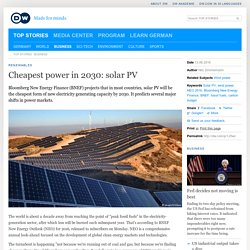 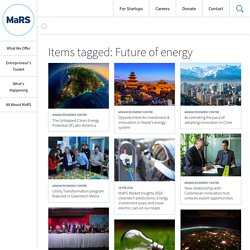 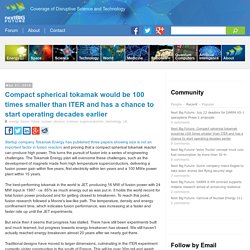 This turns the pursuit of fusion into a series of engineering challenges. The Tokamak Energy plan will overcome these challenges, such as the development of magnets made from high temperature superconductors, delivering a fusion power gain within five years, first electricity within ten years and a 100 MWe power plant within 15 years. The best-performing tokamak in the world is JET, producing 16 MW of fusion power with 24 MW input in 1997 - i.e. 65% as much energy out as was put in. It holds the world record for total fusion power produced and for getting closest to breakeven. International Tokomak Fusion project delayed another ten years and will cost $4 billion euro more and their are better energy project choices.

World Energy Mix in 2035 will have more nuclear because China will build it. According to the 2016 edition of the BP Energy Outlook, launched last month, BP says world energy consumption will grow by 34% between 2014 and 2035, from 12,928 million tonnes oil equivalent (toe) to 17,307 million toe. 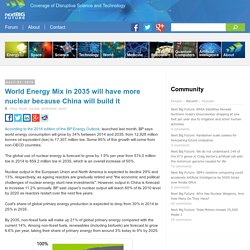 Some 95% of this growth will come from non-OECD countries. The global use of nuclear energy is forecast to grow by 1.9% per year from 574.0 million toe in 2014 to 859.2 million toe in 2035, which is an overall increase of 50%. Nuclear output in the European Union and North America is expected to decline 29% and 13%, respectively, as ageing reactors are gradually retired and "the economic and political challenges of nuclear energy stunt new investments". Uk.businessinsider. Just last week, we reported that Germany’s revolutionary nuclear fusion machine managed to heat hydrogen gas to 80 million degrees Celsius, and sustain a cloud of hydrogen plasma for a quarter of a second. 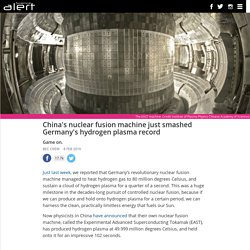 This was a huge milestone in the decades-long pursuit of controlled nuclear fusion, because if we can produce and hold onto hydrogen plasma for a certain period, we can harness the clean, practically limitless energy that fuels our Sun. Now physicists in China have announced that their own nuclear fusion machine, called the Experimental Advanced Superconducting Tokamak (EAST), has produced hydrogen plasma at 49.999 million degrees Celsius, and held onto it for an impressive 102 seconds. Hefei Institute of Physical Science, Chinese Academy of Sciences Nuclear fission, which is what our current nuclear facilities achieve, generates energy by splitting the nucleus of an atom into smaller neutrons and nuclei. The problem is it requires far higher temperatures. 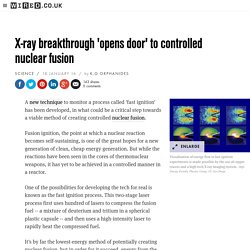 Fusion ignition, the point at which a nuclear reaction becomes self-sustaining, is one of the great hopes for a new generation of clean, cheap energy generation. But while the reactions have been seen in the cores of thermonuclear weapons, it has yet to be achieved in a controlled manner in a reactor. One of the possibilities for developing the tech for real is known as the fast ignition process. Wendelstein 7-X: The World's Largest Nuclear Fusion Reactor Comes to Life. In Brief The Wendelstein 7-X fusion device just produced the first helium plasma. 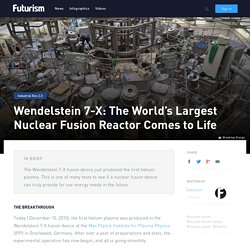 This is one of many tests to see if a nuclear fusion device can truly provide for our energy needs in the future. What Will the U.S. Energy Industry Look Like Over the Next Five Years? Low fuel prices and new climate policies are rapidly transforming the American energy sector, while escalating wars in the Middle East and a nuclear deal with Iran are clouding the global oil picture. To get a sense of what the energy future may hold, The Wall Street Journal reached out to three experts in energy and geopolitics: Amy Myers Jaffe, executive director of energy and sustainability at the University of California, Davis; Sarah Emerson, principal at ESAI Energy and president of Energy Security Analysis Inc.; and Meghan O’Sullivan, the Jeane Kirkpatrick professor of the practice of international affairs and director of the Geopolitics of Energy Project at Harvard University’s Kennedy School of Government. Here are edited excerpts. One-year outlook WSJ: What will the U.S. energy industry look like a year from now if low oil and gas prices persist?

Energy Revolution 2015. Publication - 21 September, 2015 This is the year when the fight against climate change could take a dramatic turn. The conference in Paris in December presents political and business leaders with the opportunity to take the critical decisions needed if we are to keep average temperature rises to no more than 1.5 or 2 degrees Celsius. According to the IPCC, humankind cannot emit more than 1,000 giga-tonnes of CO2 from now, if we are to stay within this limit. At the current and projected rate of consumption, this entire carbon budget will be used by 2040. Dynamic change is happening in energy supply, but the change needs to happen faster. this Energy [R]evolution scenario proposes a pathway to a 100% sustainable energy supply, ending CO2 emissions and phasing out nuclear energy, and making redundant new oil exploration in the arctic and deep sea waters such as off the coast of Brazil.

2020 Energy Strategy. By 2020, the EU aims to reduce its greenhouse gas emissions by at least 20%, increase the share of renewable energy to at least 20% of consumption, and achieve energy savings of 20% or more. All EU countries must also achieve a 10% share of renewable energy in their transport sector. Through the attainment of these targets, the EU can help combat climate change and air pollution, decrease its dependence on foreign fossil fuels, and keep energy affordable for consumers and businesses.

In order to meet the targets, the 2020 Energy Strategy sets out five priorities: Making Europe more energy efficient by accelerating investment into efficient buildings, products, and transport. This includes measures such as energy labelling schemes, renovation of public buildings, and Eco-design requirements for energy intensive productsBuilding a pan-European energy market by constructing the necessary transmission lines, pipelines, LNG terminals, and other infrastructure.

The Anzac Recreation Centre, opened last year, serves a hamlet of 800 people with 112,000 square feet of gym space, grandstands and an ice rink built to National Hockey League standards. An aboriginal dream catcher hanging in a window — the gift of the centre’s sponsor and chief local employer, the Chinese oil group Cnooc — encourages those who enter to “Dream Big”. But dreams are now more unsettling than grandiose in Alberta, the western Canadian province with the world’s third largest proven oil reserves. In the Alberta oil sands region that encompasses Anzac, unemployment has doubled to 8.6 per cent from a year ago, when prices started to fall.