California researchers found that touching the genitals and buttocks of robots arouses humans.

The Boston Dynamics Robot’s New Parkour Abilities Are So Impressive They Don’t Even Look Real. A tractor isn’t something you’d ever expect to see on Speedhunters. 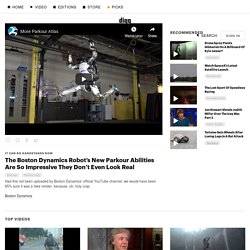 Well, not something I ever did anyway. But when I saw this crazy creation during a visit to Smoke’m Garage recently, I knew I had to take a closer look. This child robot head mimics human expressions with creepy accuracy. Researchers from osaka university in japan have designed and built an eerie robot with the face of a small child can make realistic-looking facial expressions. named affetto, creepy footage of the child robot shoes the android with just a head and no body, mimicking human expressions like smiling and frowning. all images via youtube affetto has flesh-coloured skin on its face, and can mimic a range of human expressions with incredible accuracy. researchers say it could open the door for androids to have ‘deeper interactions with humans’. the android’s first-generation model was released in a study in 2011. since then the team at osaka university worked out how to make the second version more expressive. the robot can subtly lower or raise part of its lip or eyelids to create certain expressions. 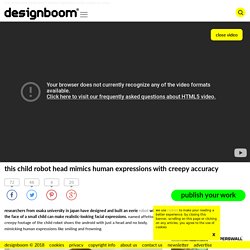 ‘surface deformations are a key issue in controlling android faces,’ dr minoru asada, the co-author of the study, said. Creepy AI Robot Sings a Cover of Bjork's "All Is Full of Love" Just How Much Bigger Is Optimus Prime than Wall-E? The humanoid robot that can exercise and even perspire when it gets hot. Meet Sophia, A Real World Humanoid Artificial Intelligence. 9 Unbelievable Robot Fails. Robots keep disappearing at Fukushima Six years ago, a massive earthquake, subsequent tsunami, and a nuclear crisis struck Japan when Fukushima Daiichi, the nuclear power plant located in the Fukushima Prefecture, melted down. 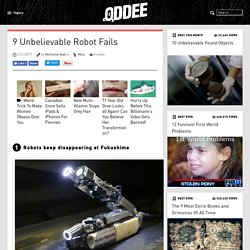 As the plant is now unsafe for people, robots have been sent in to aid in cleanup, but they are getting fried on their missions from radiation damage, or they are stranded on-site, wasting precious money and time. Don't Watch This Creepy-Ass Robot Debate Itself When You're High. This Ping Pong-Playing Robot Makes Forrest Gump Look Lazy. If you're interested in learning how to play table tennis, a robot in Japan is up for the coaching job, and the bot has even earned a Guinness World Record for its tutoring skills. 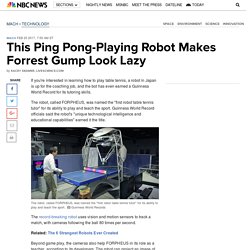 The robot, called FORPHEUS, was named the "first robot table tennis tutor" for its ability to play and teach the sport. Guinness World Record officials said the robot's "unique technological intelligence and educational capabilities" earned it the title. The record-breaking robot uses vision and motion sensors to track a match, with cameras following the ball 80 times per second. EU to debate robot legal rights, mandatory "kill switches" A draft report submitted to the European Parliament's legal affairs committee has recommended that robots be equipped with a "kill switch" in order to manage the potential dangers in the evolving field of self-learning autonomous robotics. 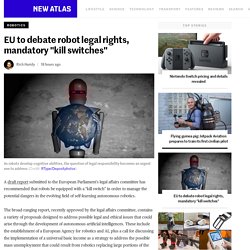 The broad-ranging report, recently approved by the legal affairs committee, contains a variety of proposals designed to address possible legal and ethical issues that could arise through the development of autonomous artificial intelligences. These include the establishment of a European Agency for robotics and AI, plus a call for discussing the implementation of a universal basic income as a strategy to address the possible mass unemployment that could result from robotics replacing large portions of the workforce. In a supreme case of life imitating art, the report opens by referencing Mary Shelley's Frankenstein and later suggests Issac Asimov's Three Laws of Robotics as a general principle that designers and producers of robotics should abide by.

Death robots: Where next after Dallas? Soldiers Are Taking Target Practice Against These Man-Shaped Robots. An Australian company has come up with a clever solution for live-fire training—but when the robot uprising comes, we may regret it. 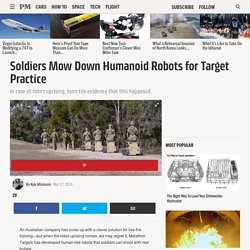 Marathon Targets has developed human-like robots that soldiers can shoot with real bullets. Each T40 robot consists of a camouflage-clad life-sized dummy, usually adorned with an AK-47 slung across its chest, mounted on top of a two- or four-wheeled robotic platform. According to Defense News, the robots stand 5'8" and weigh 500 pounds each. The bots are autonomous, programmed ahead of an exercise to simulate soldiers on guard duty, on patrol, or even just hanging around.

They can be dressed as civilians and other bystanders, too. Advertisement - Continue Reading Below The robots can be programmed to execute advanced maneuvers. Boston robot fights against pushing. Cockroach inspires robot that squishes down to crawl through cracks and crevices. For most people, the cockroach doesn't inspire anything but the shivers and a mild sense of revulsion. 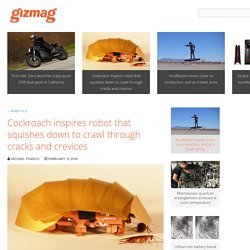 For scientists at the University of California at Berkeley (UC Berkeley), however, the insect has inspired a whole new way of thinking about robots. Meet Geminoid-F, Professor Ishiguro's latest uncanny android. Head Of Cyber Command Worried Robot Maid May Kill Him In His Sleep – Duffel Blog. FORT MEADE, Md. — The commander of U.S. 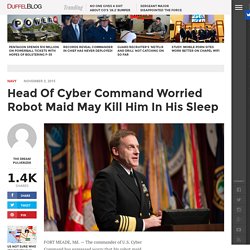 Cyber Command has expressed worry that his robot maid could someday kill him in his sleep, Duffel Blog has learned. Adm. Michael Rogers, who also oversees the National Security Agency, believes that the ISIS terrorist threat is not as personally terrifying as is the robot in his home, loaded with artificial intelligence and possibly learning how to murder him in myriad ways at a geometric rate. Nadine the eerie social robot looks and feels like humans do. Machines that can read and respond to human emotions like the fast-selling Pepper, and spooky lifelike models that look much like we do have bridged the gap between robots and humans, for better or for worse. 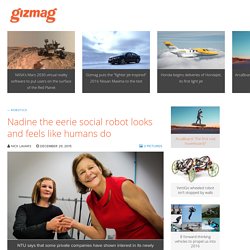 By combining these two approaches scientists at Singapore's Nanyang Technological University have taken another step in this direction, taking the wraps off a creepy new humanoid named Nadine who has her own personality and is designed to play the role of social companion or personal assistant. Some roboticists are treading cautiously in developing machines that approach human-like form. This is motivated by the idea that the more robots look and act as humans do, the more likely they are to creep us out.

This sentiment is known as "uncanny valley," and has moved some researchers in the field to reconsider how we'll interact with robots in the future. But scientists at Nanyang Technological University's (NTU) apparently don't hold such reservations.