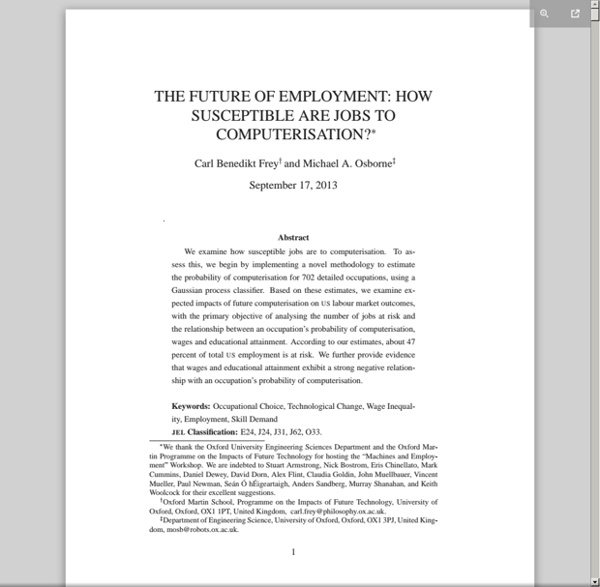 It's No Myth: Robots and Artificial Intelligence Will Erase Jobs in Nearly Every Industry - Singularity HUB With the unemployment rate falling to 5.3 percent, the lowest in seven years, policy makers are heaving a sigh of relief. Indeed, with the technology boom in progress, there is a lot to be optimistic about. Manufacturing will be returning to U.S. shores with robots doing the job of Chinese workers; American carmakers will be mass-producing self-driving electric vehicles; technology companies will develop medical devices that greatly improve health and longevity; we will have unlimited clean energy and 3D print our daily needs. Move over Millennials - it’s time to talk to Gen Z Born post 1995, this generation are true digital natives. They don’t know of life before Google, Facebook, smart mobile phones or digital TVs. Similarly referred to as the iGeneration, NetGen or Screenagers they have been born into a pervasive digital world where everything and everyone is accessible at the press of a button or click of a mouse. As such they are used to finding information and education, consuming entertainment, communicating, participating and sharing across multiple digital screens. And they are used to achieving these multiple tasks simultaneously, flitting from one screen to another as they do. (For a great overview of the unique characteristics of Gen Z check out a slide show recently produced by Sparks & Honey).

Will Your Job Be Done By A Machine? : Planet Money Machines can do some surprising things. But what you really want to know is this: Will your job be around in the future? We have the "definitive" guide. What job is hardest for a robot to do? The Next Evolution of SCOTUS Predictions: Predicting 7,000 Cases Over 60 Years with 71% Accuracy In 2009, I created FantasySCOTUS. What started off as a joke, and began as a hastily-put-together website, has grown beyond my wildest imagination. Now, we have over 20,000 players who make predictions about how the Justices will decide cases.

Generation Z: A Look at the Technology and Media Habits of Today’s Teens A study on GenZ by Wikia finds that teen users are connected nearly all waking hours of the day and report being more “actively connected” now than even 3 months ago SAN FRANCISCO, CA. – March 18, 2013 – Wikia, the world’s leading collaborative media company and home to many of the Web’s largest pop culture communities, today released findings from a study conducted among its 13-18 year-old users in association with Ipsos MediaCT “GenZ: The Limitless Generation” exploring the complex behaviors of teens and technology. According to the online survey, Wikia found its GenZ users say they are more actively connected now than they were just three months ago, giving a glimpse into a constantly connected, complex demographic that is changing more quickly than any generation before them. The extensive online survey of more than 1,200 U.S.

No One Really Knows Who Invented It - Top 10 Things You Didn't Know About Labor Day The founding father of Labor Day is tangled in a web of union figureheads and, well, spelling. As the legend goes, young carpenter Peter McGuire stood before the New York Central Labor Union in May 1882 proclaiming his plan to honor all workers with a parade through the city. But another union worker, the similarly named machinist Matthew Maguire, is also credited with proposing a day off for laborers. A New Jersey newspaper published an opinion article touting Maguire as the Father of Labor Day, but only after the day became a national holiday in 1894. It's thought that Maguire, a onetime secretary of the New York Central Labor Union, held political views that were too strong to be associated with hatching the day, so the day was credited to McGuire instead. Next The First Labor Day Celebration Was in New York City

Jason Kottke: How does a computer program compare to the Web's best link blogger? I asked my colleague Chris Wilson to build a robotic Jason Kottke because the human version looked like he could use a break. Kottke launched his eponymous site in 1998, back when blogging was just getting started. The Web has changed enormously in that time, but Kottke.org remains as vital as ever. Part of why I like the site is that Kottke and I share many interests: science, technology, Michael Lewis, typography, The New Yorker, David Foster Wallace, The Wire, and North Korea.

When Machines Can Do Most Jobs—Passion, Creativity, and Reinvention Rule - Singularity HUB Not long ago, schoolchildren chose what they wanted to be when they grew up, and later selected the best college they could gain admission to, spent years gaining proficiency in their fields, and joined a company that had a need for their skills. Careers lasted lifetimes. Now, by my estimates, the half-life of a career is about 10 years. I expect that it will decrease, within a decade, to five years. Advancing technologies will cause so much disruption to almost every industry that entire professions will disappear. businessinsider In 2011, Foreign Policy Magazine named Tyler Cowen #72 in their list of the “Top 100 Global Thinkers.” He is a professor of economics at George Mason University and, along with Alex Tabarrok, he blogs at Marginal Revolution, one of the most popular economics sites on the internet. Tyler is a New York Times bestselling author, having written 13 books including Discover Your Inner Economist and The Great Stagnation.

Futurium Advances in robotics, artificial intelligence, machine learning and natural user interfaces will have wide repercussions for society and economy in the coming 20-30 years. Future robotic systems, for instance, will operate autonomously alongside humans and assist them in complex manufacturing tasks. Also, they will be able to conduct certain service tasks such as cleaning or maintenance completely on their own. A report by the Royal Academy of Engineering (2009) suggests that autonomous systems will find applications in the medical field.

‘Natural’ sounds improve mood and productivity, study finds (credit: iStock) Playing natural sounds such as flowing water in offices could boost worker moods and improve cognitive abilities in addition to providing speech privacy, according to a new study from researchers at Rensselaer Polytechnic Institute. An increasing number of modern open-plan offices employ sound masking systems such as “white noise” that raise the background sound of a room so that speech is rendered unintelligible beyond a certain distance and distractions are less annoying. “If you’re close to someone, you can understand them. But once you move farther away, their speech is obscured by the masking signal,” said Jonas Braasch, an acoustician and musicologist at the Rensselaer Polytechnic Institute in New York.