You, Too, Can 3D Print Your Own Robot. Robots are part of our everyday lives, but they're boring — relegated to menial jobs like scrubbing your floor, vacuuming it or just zig-zagging all over it. 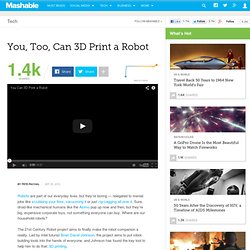 Sure, droid-like mechanical humans like the Asimo pop up now and then, but they're big, expensive corporate toys, not something everyone can buy. Where are our household robots? The 21st Century Robot project aims to finally make the robot companion a reality. Led by Intel futurist Brian David Johnson, the project aims to put robot-building tools into the hands of everyone, and Johnson has found the key tool to help him to do that: 3D printing. Over a decade ago, Johnson conceived a robot design that was friendly and practical to build, with small and childlike features. With a little help, Johnson turned his design into pages of blueprints that anyone can now download and use to print big chunks of robot on a 3D printer. It takes the cost of owning your own humanoid robot down from thousands of dollars to hundreds. Intel Futurist Shows How You'll Download and Program Your Own Robot Ne - Arik Hesseldahl. So here’s a crazy idea that, when you think about it a bit, really isn’t so crazy anymore. 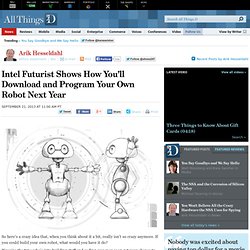 If you could build your own robot, what would you have it do? If you’re the type who’s into building stuff and coding, you may soon get your chance to answer that question for real, courtesy of an interesting project coming from the labs of chipmaker Intel. The company’s futurist, Brian David Johnson (whom I interviewed a couple years ago) is in New York this weekend at the Maker Faire.

He’s here to let folks get a look at Jimmy, an open source robot assembled from parts fabricated on a 3-D printer. He showed off Jimmy — or at least a non-working model of Jimmy — on CBS This Morning: Saturday today (video below). Once assembled, Jimmy — or whatever you choose to name it — would be as readily programmable as a smartphone.

Johnson said the plan is to create a kit that would be available for purchase for less than $1,000 no later than May of next year. Meet Jimmy the Open Source 3D Printed Robot. Intel has something in the works that you won't want to miss: an open source 3D printed robot they are calling Jimmy. 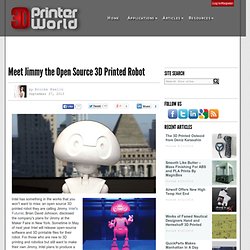 Intel's Futurist, Brian David Johnson, disclosed the company's plans for Jimmy at the Maker Faire in New York. Sometime in May of next year Intel will release open-source software and 3D printable files for their robot. For those who are new to 3D printing and robotics but still want to make their own Jimmy, Intel plans to produce a sci-fi themed book with assembly instructions. You can download an early version of the book for free here [PDF]. "Starting with the 3D files, everyone should be able to design and customize their own robot. As far as capability goes, Johnson said that Jimmy will be comparable to a "Smartphone with legs. " You can watch Brian David Johnson discussing Jimmy and the future of robotics here: 3D printing is helping a number of companies and hobbyists take their robots to the next level. My Robot, Makey. Step #1: Make the body. 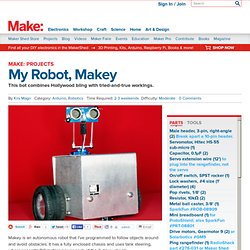 PrevNext The body consists of 2 pieces of sheet aluminum. You can cut, drill, and bend one piece at a time, or do both at once to minimize switching tool stations; see Step 5.Download the 5 Makey templates from and print them out full-size. Cut out the base cutting template, and cut holes in the blank area of each panel. Securely tape the template to the aluminum sheet with double-stick tape on the back and regular tape over the holes.CAUTION: Always wear protective eyewear when cutting metal.With a band saw, cut the aluminum roughly to size around the template, then cut the perimeter just outside the lines.TIP: For inside corners, first cut a gradual curve close to the corner, then back up and cut into the corner’s point from each direction. Step #5: For the body’s top cover, repeat Steps 1-4 using the top cutting and bending templates.Now you’ve got one sweet chassis any robot would be proud to wear! Step #6: Add the drivetrain. 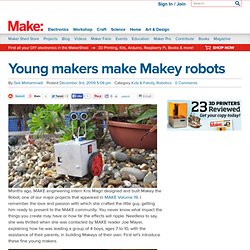 I remember the love and passion with which she crafted the little guy, getting him ready to present to the MAKE community. You never know what impact the things you create may have or how far the effects will ripple. Needless to say, she was thrilled when she was contacted by MAKE reader Joe Mayer, explaining how he was leading a group of 4 boys, ages 7 to 10, with the assistance of their parents, in building Makeys of their own. First let’s introduce these fine young makers. Pictured above is Tommy Acuna, age 7, who has an impressive time machine he built in his backyard. I asked Joe Mayer to offer some background on how the group came to be and this is what he said: