In Praise of Idleness By Bertrand Russell 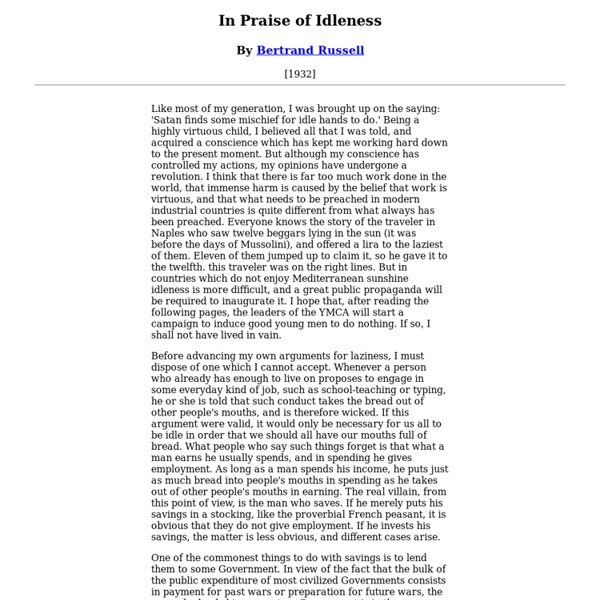 Like most of my generation, I was brought up on the saying: 'Satan finds some mischief for idle hands to do.' Being a highly virtuous child, I believed all that I was told, and acquired a conscience which has kept me working hard down to the present moment. But although my conscience has controlled my actions, my opinions have undergone a revolution. I think that there is far too much work done in the world, that immense harm is caused by the belief that work is virtuous, and that what needs to be preached in modern industrial countries is quite different from what always has been preached. Everyone knows the story of the traveler in Naples who saw twelve beggars lying in the sun (it was before the days of Mussolini), and offered a lira to the laziest of them. Eleven of them jumped up to claim it, so he gave it to the twelfth. this traveler was on the right lines. Before advancing my own arguments for laziness, I must dispose of one which I cannot accept. All this is only preliminary.

Bifurcation in the labour market First posted at Coppola Comment on 12th February 2013. Reports on the UK jobs market are surprisingly upbeat. The FT, reporting on the North of England and the Midlands, noted that jobs were being created at quite a rate (paywall). The ONS confirmed this in its Regional Labour market statistics for 23rd January. The Hunt for the Algorithms That Drive Life on Earth To the computer scientist Leslie Valiant, “machine learning” is redundant. In his opinion, a toddler fumbling with a rubber ball and a deep-learning network classifying cat photos are both learning; calling the latter system a “machine” is a distinction without a difference. Valiant, a computer scientist at Harvard University, is hardly the only scientist to assume a fundamental equivalence between the capabilities of brains and computers. But he was one of the first to formalize what that relationship might look like in practice: In 1984, his “probably approximately correct” (PAC) model mathematically defined the conditions under which a mechanistic system could be said to “learn” information. Valiant won the A.M. Turing Award — often called the Nobel Prize of computing — for this contribution, which helped spawn the field of computational learning theory.

lifehack Books have the power to help people realize their dreams and maximize their potential. A good reading experience can be life-changing. Here are 10 books recommended by global entrepreneurs. 4 Tips for Staying Productive While You Travel Not too long ago, work meant being in an office and travel meant not working. Today, with both flexible employers and digital communication tools, many of us can work from anywhere. But, it's easier said than done. Navigating airports and finding outlets and Wi-Fi can be half the battle. Then, a task that usually takes half an hour suddenly takes so much longer because you're out of your element. Whether you're on a real vacation and just want to check in with your crew, or are on a working vacation, or are traveling for work, these four tips should help you stay productive while away from your home base.

Feeling Like a Man In pop culture, the concept of “feeling like a woman” permeates both advertising and entertainment. From songs such as Aretha Franklin’s You Make Me Feel Like a Natural Woman to Shania Twain’s Man! I Feel Like a Woman! , the idea that feeling like a woman is a glorious thing is spread throughout our culture. Sympathy for the Luddites Those weren’t foolish questions. Mechanization eventually — that is, after a couple of generations — led to a broad rise in British living standards. But it’s far from clear whether typical workers reaped any benefits during the early stages of the Industrial Revolution; many workers were clearly hurt. And often the workers hurt most were those who had, with effort, acquired valuable skills — only to find those skills suddenly devalued. So are we living in another such era? And, if we are, what are we going to do about it?

3-D Printed Garment Shape-Shifts Based on an Onlooker's Gaze When a porcupine feels threatened, its quills bristle. In humans, the same anatomical reflex is responsible for goose bumps. Neither response is voluntary, and both typically occur in response to external stimuli. But the porcupine’s reaction is considerably more dramatic, its prominent spines undulating as the skin to which the rigid quills attach moves, pliably, atop muscle and bone. Caress of the Gaze, a 3-D printed garment created by architect and designer Behnaz Farahi, was inspired by the involuntary action of animal skin, but also by its complex architecture—the interplay of muscles, hair, feathers, quills, scales. “The skin is not a homogenous surface,” she explains.