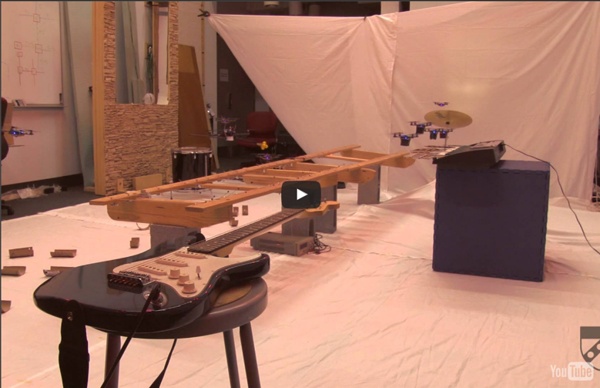 reaDIYmate: Wi-Fi connected characters made with papercraft Mixing paper and electronics seems to be the new in thing at Kickstarter. A few days ago we saw the cardboard Berlin Boombox, and now we have the reaDIYmate (pronounced "readymate"), a series of programmable papercraft pals with Wi-Fi connectivity. You can assemble them in 10 minutes or so, and they come in two parts: a moving paper "body" with a motor and a speaker inside, and a computer "brain" with a button, 2GB flash memory and a Wi-Fi radio. There are two main body types, the Paper Toys and the Kinetic Sculptures, and both come in a variety of styles from artists and designers. Once the reaDIYmate is hooked up online via a simple web interface, you can program them to do all kinds of things — play an MP3 when you get a Twitter or Facebook notification, check into Foursquare whenever you press the button on the "brain," play a sound file when you email it to a linked address, and so on.

Nadav Assor Ophan is an installation incorporating a physically restrained, customized hexacopter as a mechanized cantor, flying and reciting all 28 verses of chapter 1 from the biblical book of Ezekiel. When Ophan is at rest, with no people present at the center of the space, the hexacopter softly hums, whispers, or even sings to itself (its favorite song is “Someone to Watch Over Me”). When a presence is detected in the space, the hexacopter’s rotors turn on and it takes flight, struggling against the cables that restrain it, singing and gesturing its way through all the biblical verses mentioned above, as sung in Hebrew in the Yemenite tradition by the Cantor Dan Jacobi. The Yemenite style of Cantorial singing-chanting (cantillation) is monotonous – that is, there is no melody, rather a droning recitation similar to other eastern musical traditions.

The Pocket Drone - Your personal flying robot by AirDroids The Pocket Drone is the personal flying robot that enables anyone to capture amazing video and photos from the sky. The year 2014 is going to be the “Year of the Drone.” Personal and professional photography is literally beginning to take off. Everybody can already take great looking photos and videos with their camera phones and share them online, but they have been limited to what could be seen from the ground. Video shows Dutch police training the birds of prey to take down drones in mid-air  From radio jamming to robots with nets, many ideas have been tested to down drones snooping where they shouldn't be. But the Dutch National Police is taking a less technological approach to enforcing drone laws. A video reveals it is training eagles to catch the menacing machines in mid-air, taking them down in one fell swoop. Scroll down for videos

Living Legos: Build Your Own Robot with TinkerBots Blocks Living Legos: Build Your Own Robot with TinkerBots Blocks Article by Steph, filed under Gadgets & Geekery in the Technology category. High-tech and low-tech come together with this set of not-so-basic building blocks connected to a central ‘Power Brain’ cube that turns your creation into a working robot. TinkerBots is a building kit that comes with all sorts of mobile and immobile components that snap together around the central cube so you can create an endless array of custom toys that walk, crawl, roll or or perform other movements. The red ‘Power Brain’ cube provides energy and contains an Arduino-compatible microcontroller, Bluetooth connectivity, a USB charger, an LED button interface, a speaker and more.

eMotionButterflies Flying is a recurring theme in the Bionic Learning Network. The developers channelled their knowledge gained from the projects on the BionicOpter and the eMotionSpheres into the bionic butterflies. They combine the ultralight construction of artificial insects with coordinated flying behaviour in a collective. Ten cameras installed in the room record the butterflies using their infrared markers. The cameras transmit the position data to a central master computer, which coordinates the butterflies from outside. The intelligent networking system creates a guidance and monitoring system, which could be used in the networked factory of the future.

StickR TrackR GPS Smart Chip TrackR helps you find important items that go missing. The TrackR app monitors the location of your items and remembers where your belongings are located on a map. With TrackR's technology, you can find your Phone or TrackR with the simple press of a button. You can optionally choose to be alerted if you are about to leave something important behind. Video: Watch Harvard’s Teeny-Tiny Robotic Insect Take Flight It’s about the size of a quarter. Its translucent wings flap a frantic 120 times per second. Its buzz involuntarily makes you aware of the hairs on the back of your neck. It’s a robot. The video above shows the RoboBee. BoozeBots Robot Bartenders More compact, less daunting, and less expensive (though still not cheap) takes on the previously Kickstarted Bartendro, BoozeBots are drink-slinging robots. Machines that siphon connected ingredients and use a library of over 4,500 recipes to mix your cocktails for you Jetsons-style. BoozeBot models contain pumps for connecting between 2 and 16 different ingredients. Whether shooting out a vodka tonic with the simplest version or constructing an elaborate Planter's Punch with 8 different BoozeBot pipes a-slurping, the robots promise to pour cocktails with "pinpoint precision", and often in under 30 seconds.

Natalie Kosmina On this page you will find all the information pertaining to piloting a drone with you thoughts: demonstrations, experiment descriptions, etc. You can find a press kit here. If you liked the Brainy Drone demo, an exciting new project awaits. Equil Smartpen Want to digitally immortalize your Best Ever Iron Man sketch? (Or, in my case, boobie doodles?) The Equil Smartpen turns drawings done by hand into editable digital copies that can be stored and revisited ad infinitum with the press of a buttom. Whether you would like to edit your sketches and notes or just convert pen-and-ink content to enhance readability, Equil's range of colors and pen tips will assist by turning your actual designs into more easily manipulated virtual ones.