Robot Activities Kids will Love - Fun-A-Day! I’m teaming up with some of the All Things Kids ladies to bring you ideas for summer camp at home! 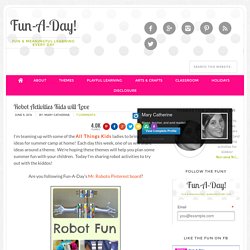 Each day this week, one of us will share ideas around a theme. We’re hoping these themes will help you plan some summer fun with your children. Today I’m sharing robot activities to try out with the kiddos! Are you following Fun-A-Day’s Mr. Roboto Pinterest board? Click on the underlined, orange text to be brought to each specific activity. Use tin cans and craft supplies to make magnetic robots. Explore simple circuits while discussing the inner workings of robots.

BeingHuman - Vytas SunSpiral's thoughts on the Art and Science of Being Human. When developing a new simulator, it is important to constantly verify with real hardware implementations that the resulting simulations are a reasonable reflection of reality, and not just pretty movies. 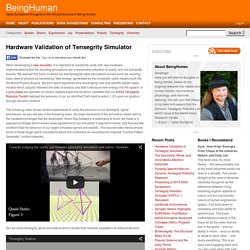 We learned this early on when our first tensegrity robot simulations turned out to be violating basic laws of physics by harnessing “free-energy” generated by the unrealistic cable models built into the Bullet Physics Engine. We then spent significant time developing new and realistic elastic cable models which actually followed the laws of physics and didn’t introduce new energy into the system. In a prior paper we reported on motion capture experiments which validated that our NASA Tensegrity Robotics Toolkit matched the behavior of our six strut ReCTeR robot to within 1.3% error on position through dynamic motions. The following video shows recent experiments to verify the behavior of our tensegrity “spine” simulations. Posted in Bodies, Robots, Tensegrity. Continued… Air-Powered Soft Robotic Gripper. 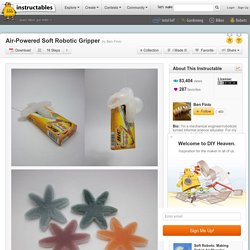 Read before you try this project! Update (11/22/2013): MUCH cheaper option added to the materials list to replace the squeeze bulbs. Thanks to the education staff at the Franklin Institute in Philadelphia, PA for pointing that out! Update (4/23/2013): smaller, cheaper "mini" gripper STL file has been added. This gripper will cost less to order from a 3D printing service and won't require as much air to inflate (easier to inflate with a single pump from a squeeze bulb).

Credits: The soft robot technology in this project was originally developed in the Whitesides Group at Harvard University. "Soft robots" are all the rage in the robotics research community right now. How to make a simple balloon Robot! Balloon Twists. Balloon Twisting. Twisty Balloon Pneumatic Actuator.

With Instructables you can share what you make with the world and tap into an ever-growing community of creative experts. 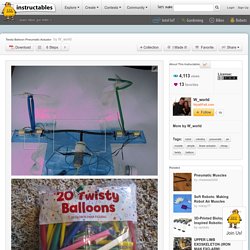 Create on the go: create instructableshare what you made with text, photos, video, and filesCreate »create collectiongather your favorite instructables togetherCreate » Groups » Forums » What is a Circuit? Overview Welcome to circuits 101! 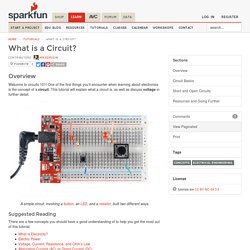 One of the first things you’ll encounter when learning about electronics is the concept of a circuit. This tutorial will explain what a circuit is, as well as discuss voltage in further detail. A simple circuit, involving a button, an LED, and a resistor, built two different ways. Suggested Reading. Flexinol Wire 0.008" HT. Untitled. 10 Tips for Making Great Build Videos. This article first appeared in MAKE Volume 38, on pages 62–63. 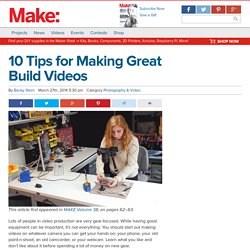 Lots of people in video production are very gear-focused. While having good equipment can be important, it’s not everything. You should start out making videos on whatever camera you can get your hands on: your phone, your old point-n-shoot, an old camcorder, or your webcam. Learn what you like and don’t like about it before spending a lot of money on new gear. Once you’re ready to take the plunge, think carefully about your needs. 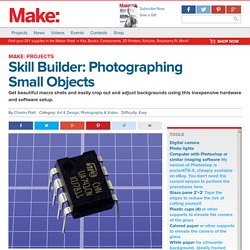 Taking pictures of small objects is a useful skill. If you’re selling something on eBay, or you want a permanent record of a crafts project, or you own something valuable that should be photographed for insurance purposes, you’ll want it to look as good as possible. For Make More Electronics (the sequel I’m now writing to Make: Electronics), I wanted especially clean photos. This entails controlling two primary variables: lighting and background.

In addition, I wanted to have a grid that shows the scale. I addressed the issue of lighting in LED Photo Lights back in MAKE Vol 34, but controlling the background is trickier. Downloads. Lab Notebooks. Journals and log books are used by researchers and writers in almost every field. 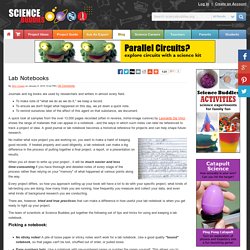 To make note of "what we do as we do it," we keep a record. To ensure we don't forget what happened on this day, we jot down a quick note. To remind ourselves later of the affect of this agent on that substance, we document. A quick look at samples from the over 13,000 pages recorded (often in reverse, mirror-image cursive) by Leonardo Da Vinci shows the range of materials that can appear in a notebook - and the ways in which such notes can later be referenced to track a project or idea.