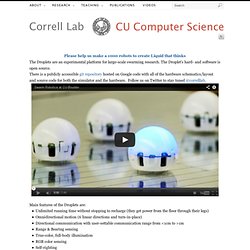 The Droplet’s hard- and software is open source. There is a publicly accessible git repository hosted on Google code with all of the hardware schematics/layout and source code for both the simulator and the hardware. Follow us on Twitter to stay tuned @correlllab. Main features of the Droplets are: Flying robots: Nature inspires next generation design. The robots of the future won't look anything like the Terminator. Jump To up down Close Andy Marchese has a lot of fish tanks but no fish food — his fish prefer batteries and compressed air. 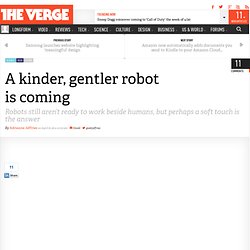 On a recent Monday, Marchese conducted an out-of-water demonstration of Bubbles, a pool-green silicone fish that sways its tail as cavities on each side of its body alternately inflate, creating a perfect imitation of a carp. It is the first autonomous, self-contained robot made mostly of soft parts. Roboticists are prejudiced toward rigid structures, for which algorithms can be inherited from the well-established factory robot industry. The Bubbles demonstration was a rare glimpse into MIT’s elite Computer Science and Artificial Intelligence Laboratory (CSAIL), the lab that bred graduates who produced the World Wide Web and public key encryption. The field of soft robotics has attracted a rush of attention in the last year. Before the 1970s, car companies made cars safer by making them larger and heavier. MOSS - The Dynamic Robot Construction Kit. I missed your Kickstarter and/or Pre-orders, can I still order a kit now? 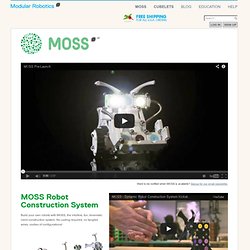 Sorry, not right now! Please see the answer for "How can I order MOSS? " below. How to Build a Robot Tutorials - Society of Robots. The RMF Calculator is designed to help you decide 'is my motor strong enough for my robot? 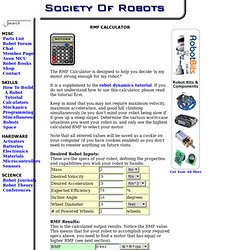 ' It is a supplement to the robot dynamics tutorial. If you do not understand how to use this calculator, please read the tutorial first. Keep in mind that you may not require maximum velocity, maximum acceleration, and good hill climbing simultaneously (ie you don't mind your robot being slow if it goes up a steep slope). Determine the various worst-case situations you want your robot in, and only use the highest calculated RMF to select your motor. Note that all entered values will be saved as a cookie on your computer (if you have cookies enabled) so you don't need to reenter anything on future visits. Desired Robot Inputs: These are the specs of your robot, defining the properties and capabilities you wish your robot to handle. 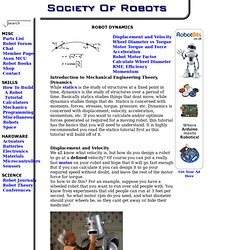 Basically statics studies things that dont move, while dynamics studies things that do. Statics is concerned with moments, forces, stresses, torque, pressure, etc. Dynamics is concerned with displacement, velocity, acceleration, momentum, etc. If you want to calculate and/or optimize forces generated or required for a moving robot, this tutorial has the basics that you will need to understand. ArduRover. Table of Contents Get It APM:Rover Components You’ll need: An RC vehicle and a 6+channel RC radio setup. 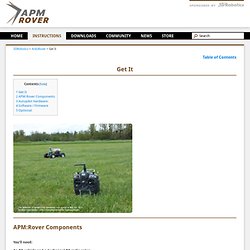 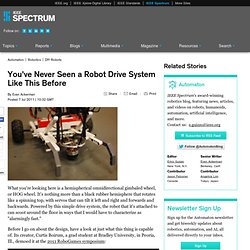 It's nothing more than a black rubber hemisphere that rotates like a spinning top, with servos that can tilt it left and right and forwards and backwards. Powered by this simple drive system, the robot that it's attached to can scoot around the floor in ways that I would have to characterize as "alarmingly fast.

" Before I go on about the design, have a look at just what this thing is capable of. Its creator, Curtis Boirum, a grad student at Bradley University, in Peoria, Ill., demoed it at the 2011 RoboGames symposium: uArm, A Mini Robotic Arm You Can Assemble and Control. Robotic arms live in factories, tirelessly assembling heavy things, cutting through metal (like butter)—and generally doing some pretty dangerous and crucial work. 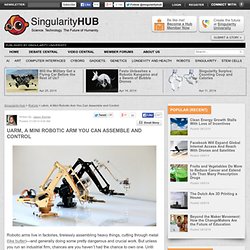 But unless you run an industrial firm, chances are you haven’t had the chance to own one. Until now, that is. With the uArm Kickstarter, you can assemble and mount your very own mini robotic arm on the desk, nightstand, or kitchen counter for a pledge of $185. Based in Shenzhen, China, UFactory—short for “your factory”—makes user friendly, open source hardware kits to help people learn about electronics and robots. 2PCS/LOT PCB =1PCS ULN2003 Five Line Four phase Stepper Motor Driver Module+1PCS 5V 4 phase Stepper Motor-in Other Electronic Components from Electronic Components & Supplies on Aliexpress. 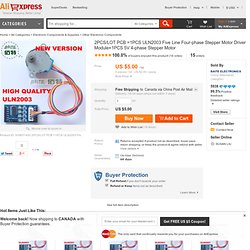 / / Simple Arduino Robot Valentino Braitenberg developed a model of simple vehicles with sensors and actuators (motors) and interconnections between them. 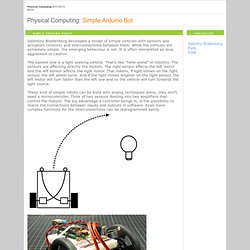 While the vehicles are extremely simple, the emerging behaviour is not. It is often interpreted as love, aggression or caution. The easiest one is a light seeking vehicle. That’s like “hello world” in robotics. Simple Robotics Breadboard : Assembling the Robot Breadboard - Part 2: Babuino. In Step 1 we put all the mechanical components on our robotics breadboard.We added wheels in Step 2.

Now we just need to add the electronic components we learned about in steps 3 and 4, and we're ready to play. As stated in the Introduction, I'll show you how to build an Arduino clone and configure it as a Babuino. I'll also show you an alternative Arduino-compatible Babuino that is simpler, easier to program, and has additional hardware resources (for a future Babuino release).