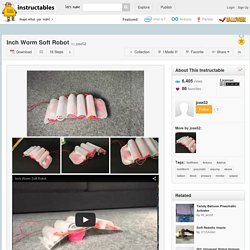 5 Year Olds Coding Without Technology. Melissa Dann () is a prep teacher in Melbourne Australia who has begun exploring the concepts of coding with her five year old students. 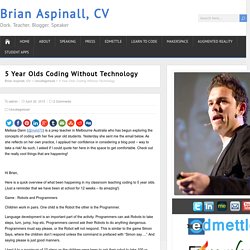 Yesterday she sent me the email below. As she reflects on her own practice, I applaud her confidence in considering a blog post – way to take a risk! As such, I asked if I could quote her here in this space to get comfortable. Check out the really cool things that are happening! Hi Brian,   Robot Information Central. 168.pdf. 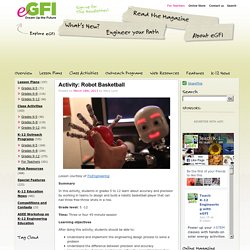 How To Build A Robot: Fun Crafts For Kids. The best thing about learning how to build a robot is you get to re-use household junk and turn it into great free crafts for kids. 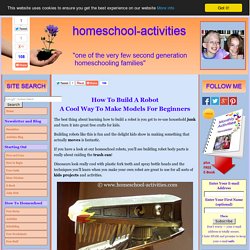 Building robots like this is fun and the delight kids show in making something that actually moves is fantastic. Scribbling_machines.pdf. First walker. Simple Bots. What is a bot? 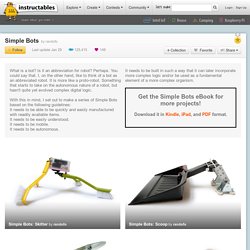 Is it an abbreviation for robot? Perhaps. You could say that. I, on the other hand, like to think of a bot as an abbreviated robot. Remove a Servo Controller. Tiny, Origami Robots Can Climb, Swim and Burrow. By their very nature, robots are a little creepy, I think we can all agree on that. 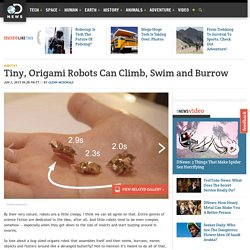 Entire genres of science fiction are dedicated to the idea, after all. And little robots tend to be even creepier, somehow — especially when they get down to the size of insects and start buzzing around in swarms. So how about a bug-sized origami robot that assembles itself and then swims, burrows, moves objects and flutters around like a deranged butterfly? Not to mention it’s meant to do all of that, eventually, inside your body? DNews: Folding Nature With Origami One potential application is to someday deploy the ‘bot inside the human body, where — guided by magnetic fields — it could be used to scout around and deliver medicines to specific locations.

Yes, creepy — but also undeniably cool. You really have to see this thing in action to appreciate it. Search - All. Motor Controllers for Cheap Robots 2. Hello and welcome! 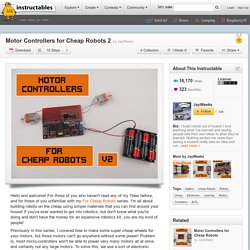 For those of you who haven't read any of my I'bles before, and for those of you unfamiliar with my For Cheap Robots series, I'm all about building robots on the cheap using simple materials that you can find around your house! If you've ever wanted to get into robotics, but don't know what you're doing and don't have the money for an expensive robotics kit, you are my kind of people! Previously in this series, I covered how to make some super cheap wheels for your motors, but those motors can't go anywhere without some power!

Problem is, most micro-controllers won't be able to power very many motors all at once, and certainly not any large motors. To solve this, we use a sort of electronic switch called a transistor. This was the simplest circuit I could come up with for controlling motors. Let's get started! (If any of this sounds familiar, that's because I've already created a motor controllers tutorial before.

Robotarm_0.pdf. 3D Printed Exoskeleton Hands by 3DPrintIt. New Exoskeleton Arms >>> 3D printed exoskeleton hands that I made for a bit of fun. 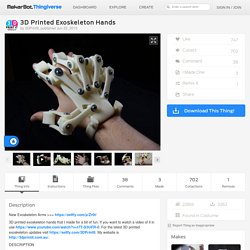 If you want to watch a video of it in use For the latest 3D printed exoskeleton updates visit My website is The manual is in the .zip file. I designed the hand using ABS plastic the more infill the stronger the hand but the longer the print time. The entire hand will take approximately 18 hours in total and cost about $8.00 in plastic (at 4 cents a gram). ***Disclaimer – 3D Print It will not be liable for personal injury resulting from negligent use of this product. 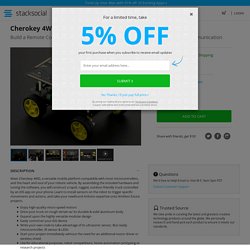 By assembling the included hardware and tuning the software, you will construct a rapid, rugged, outdoor-friendly truck controlled by an iOS app on your phone. Learn to install sensors on the robot to trigger specific movements and actions, and take your newfound Arduino expertise onto limitless future projects. Digilent Inc. - Digital Design Engineer's Source. The Digilent Line-Following Motor Robot Kit (MRK+Line) provides the perfect starting point for those new to robotics, but has the power to be used for advanced designs and applications as well. 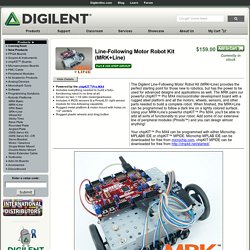 The MRK pairs our powerful chipKIT™ Pro MX4 microcontroller development board with a rugged steel platform and all the motors, wheels, sensors, and other parts needed to build a complete robot. When finished, the MRK+Line can be programmed to follow a dark line on a lightly colored surface. Digilent Inc. - Digital Design Engineer's Source.

How to Build the SimpleBotics SimpleBot! Make It @ Your Library. Me Arm - Version 0.1 - Ultra Cheap Robot Arm by phenoptix. MeArm - Build a Small Hackable Robot Arm. This instructable is only for the MeArm v0.3. Make a Robotic Balloon Muscle. Step #1: Blow Up Two Balloons PrevNext Use the hand pump to inflate two balloons, leaving about 4 to 5 inches (10 to 12 cm) uniflated at the end. This is known as the tip of the balloon. Remove the pump and let out a little air (known in the business as burping the balloon). This bit of slack makes it easier to twist the balloon without popping it. 239512main_Calculator_Controlled_Robots. Robot Kit - Norland ResearchHome of the Calculator Controlled Robot Kit.

Nestling: diy Robot Wreath. I firmly believe that when you throw a party (especially for children), that decorating where your guests enter is just as important as the decorations for the party itself, because you want to set the tone the moment they arrive. So what better way to welcome our guests to a robot party, than a a custum wreath? Wreaths are such a versatile way to introduce your theme. We have wreaths for holidays, so why not parties? I love LOVE the idea of using slinkies in our robot party. Science for Kids: Balancing Robot (FREE Printable) Here’s a super fun science activity that really gets kids thinking! Children will explore balance and center of gravity by creating a balancing robot! Follow our Science for Kids Pinterest board! *This activity was originally published on June 1, 2014 and has since been updated.

Untitled. Robot recipes: durable metal robot toys made with the cans from last night’s dinner #ArtTuesday. November 4, 2014 AT 12:00 am Via B.Light Design. Every Tuesday is Art Tuesday here at Adafruit! Today we celebrate artists and makers from around the world who are designing innovative and creative works using technology, science, electronics and more. The pencil drone. Worm Robot - from a CDROM Drive Door Opening Mechanism.

Simple Bots: Inchworm. Weekend Project: Beetlebot. Weekend Project: Beetlebot. Cheap flying Lego quadcopter - English. Hydraulic rubric. Hydraulic robots. NXT Base Set and Software Pack. Motors and Wheels for Cheap Robots. When I was little, and just getting started out with robotics, I had very little in the way of funds or patience for ordering robot kits online. Back then the selection was more limited than today and pretty much all the robotics kits were built for Windows users, which my family and I very much were not (and I was not as adept at finding things for myself online). Left to fend for myself, I had to get creative. You might even say I got "crafty". I used cardboard for my robot chassis, cardboard for my wheels... cardboard for pretty much everything, with bottle caps, duct tape, and other bits and bobs thrown in.

While I had some success, my very restricting resources, combined with my childlike lack of motivation without immediate results, proved to be my downfall. More often than not, my biggest stumbling block were wheels. Cardboard Chassis for Cheap Robots 1: Boxbot. DESIGN SQUAD NATION . Build. Did you know? Robotic Arm - Edge.