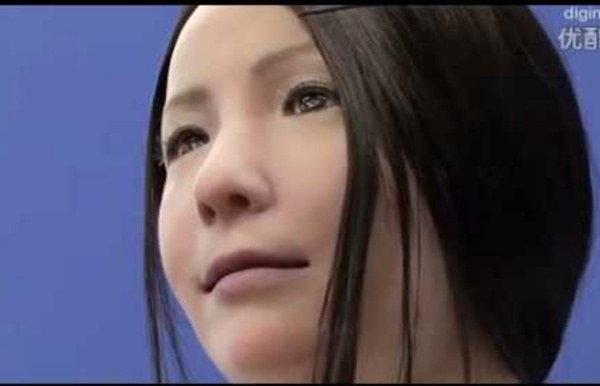 Researchers Create Thousand Strong Swarm Of Bots That Can Assemble Into Complex Shapes By itself, this simple little puck-shaped robot is cute, but not revolutionary: It’s a few centimeters across, stands on three pin-like legs, moves a centimeter a second, and costs about $20. Put a thousand or so of these Kilobots together, and you have the largest robotic swarm the world has ever seen. Self-assembling robotic systems exist, but they’ve been limited to dozens, maybe a few hundred robots. Now, a trio of Harvard researchers led by Michael Rubenstein has programmed 1,024 Kilobots to organize themselves into various shapes, such as stars, a wrench, and letters of the alphabet. Kilobots were designed to mimic the behavior of a swarm of bees, colony of army ants, or flock of starlings. These inexpensive robots have two little vibrating motors to help them slide across surfaces on their skinny rigid legs. The infrared transmitters are also used by the scientists to give commands to all the bots simultaneously. Here’s a video of the first thousand-bot flash mob: Photo Gallery

World's most anatomically correct musculoskeletal robot is presented in Japan Most human-like robots don't even attempt biological accuracy, because replicating every muscle in the body isn't necessary for a functional humanoid. Even biomimetic robots based on animals don't attempt to replicate every anatomical detail of the animals they imitate, because that would needlessly complicate things. That said, there is much to be learned from how muscle groups move and interact with the skeleton, which is why a team at Tokyo University's JSK Lab has developed what could be considered the world's most anatomically correct robot to date. View all Researchers there have been developing increasingly complex musculoskeletal robots for more than a decade. Their first robot, Kenta, was built in 2001, followed by Kotaro in 2005, Kojiro in 2007, and Kenzoh (an upper-body only robot) in 2010. It models the average 12 year-old Japanese boy, standing 158 cm (5 feet, 2 inches) tall and weighing 50 kg (110 pounds). Muscle and bone Source: Tokyo University JSK Lab via IEEE Spectrum

HERB the robot butler takes part in Oreo cookie challenge HERB brandishes a knife in a futile attempt to separate cookie from creme Image Gallery (9 images) The dream of an intelligent robot butler that can do the household chores may still be decades away, but a team of roboticists at Carnegie Mellon University's Robotics Institute is doing their part to make it a reality. View all HERB, which speaks with a synthetic British accent and looks related to the Mars rover, started off as a Segway-powered one-armed bandit that could locate and grasp coffee mugs or open kitchen cabinets. Food giant Nabisco's marketing stunt, which tasks inventive people with too much time on their hands to build an Oreo-separating machine, seemed like a good opportunity to put HERB's sensing and manipulation capabilities to the test. The problem with these butler robots is they are quite limited in what they can actually do, and are still far too expensive to be practical for the masses. Watch HERB mug for the camera in the following video. About the Author

New NASA Robot, 'Valkyrie,' Looks Like Iron Man The newest humanoid robot from NASA just might be mistaken for a superhero. The space agency's new Valkyrie — a 6 foot 2 inch tall (1.9 meters) robot with a glowing NASA logo on its chest — bears an uncanny resemblance to Marvel's superhero Iron Man, but this space age automaton was built for work, not comic book heroics. A team of engineers at NASA's Johnson Space Center in Houston, Tex., designed and built Valkyrie in just nine months, according to press reports. The robot was developed for the DARPA Robotics Challenge taking place at the end of the month and is designed to help humans during disasters. NASA's new robot Valkyrie was designed for the DARPA Robotics Challenge taking place in December 2013. "We want to get to Mars," the team leader for Valkyrie, Nicolaus Radford told IEEE Spectrum in a video about the robot. Some team members working with Valkyrie also worked with the space agency's Robonaut, NASA officials said.

Non-Human Consciousness Exists Say Experts. Now What? Non-Human Consciousness Exists Say Experts. Now What? Phillip Low at Singularity University Have you ever considered the consciousness, or unconsciousness, of your dog? Earlier this month, some of the leading scientists from around the world congregated at the Hotel Du Vin in Cambridge to discuss the evidence that has amassed over the years. the declaration of consciousness Organized by Philip Low, CEO of NeuroVigil and inventor of the iBrain, the group consisted of 25 of the planet’s top minds on the mind, including honorary guest Stephen Hawking. This announcement arises in a manner similar to the Pluto files in 2006, when the world's leading astronomer's demoted Pluto from planet to "dwarf planet". As mankind continues to explore the universe, many more discoveries will prompt an official announcement such as the one Phillip Low delivered this week at Singularity University. For more on the conference and the Cambridge declaration, check out

uk.businessinsider Robot toddler could unlock secrets of human development Robotics, neuroscience, developmental psychology, and machine learning have converged in a new project led by University of California San Diego researchers. Meet Diego-san, a robotic one-year-old that “learns” to move and interact the same way a real baby does — by watching you. Besides bringing us that much closer to the uncanny valley, Diego-san is also providing a deeper understanding of sensory motor and social intelligence in children. Diego-san stands about 4 feet 3 inches tall and weighs 66 pounds. Its body has a total of 44 pneumatic joints. As reported by science website Phys.org: The robot is a product of the “Developing Social Robots” project launched in 2008. Creepy as this science might seem, researchers hope it will provide new insights into the study of infant development and help us better understand developmental disorders such as autism.

Robot learns ‘self-awareness’ Who’s that good-looking guy? Nico examines itself and its surroundings in the mirror. (Credit: Justin Hart / Yale University ) “Only humans can be self-aware.” Another myth bites the dust. Yale roboticists have programmed Nico, a robot, to be able to recognize itself in a mirror. Why is this important? Using knowledge that it has learned about itself, Nico is able to use a mirror as an instrument for spatial reasoning, allowing it to accurately determine where objects are located in space based on their reflections, rather than naively believing them to exist behind the mirror. Nico’s programmer, roboticist Justin Hart, a member of the Social Robotics Lab, focuses his thesis research primarily on “robots autonomously learning about their bodies and senses,” but he also explores human-robot interaction, “including projects on social presence, attributions of intentionality, and people’s perception of robots.” Nico in the looking glass So far, no robot has successfully met this challenge.