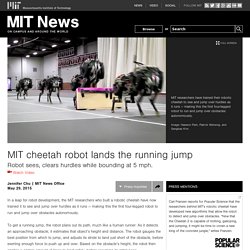 To get a running jump, the robot plans out its path, much like a human runner: As it detects an approaching obstacle, it estimates that object’s height and distance. The robot gauges the best position from which to jump, and adjusts its stride to land just short of the obstacle, before exerting enough force to push up and over. Based on the obstacle’s height, the robot then applies a certain amount of force to land safely, before resuming its initial pace. In experiments on a treadmill and an indoor track, the cheetah robot successfully cleared obstacles up to 18 inches tall — more than half of the robot’s own height — while maintaining an average running speed of 5 miles per hour. Watch the MIT researchers' robotic cheetah take a running leap over obstacles.

Why we should welcome our new robot overlords. Are you frightened of robots? 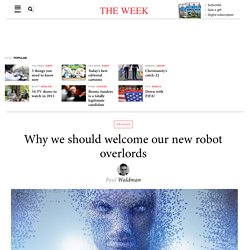 In the movies, when a robot or artificial intelligence shows up, there's a fair chance that it's going to go rogue and start killing people. Those stories work with (and reinforce) our fears about machines threatening us, but what may be most frightening about the robots in our near future is that they'll highlight our own limitations and inadequacies. That's already happening in the workplace, where robots are replacing more and more workers, particularly in manufacturing. Though we've had industrial robots for quite a while now (the first one, called Unimate, was put to work in a General Motors factory in 1961), the number of tasks they can do is rapidly increasing, and there are whole classes of human occupations that could disappear in the next decade or two.

Which brings us to driverless cars. Welcome to Forbes. Robot learns by doing. Starts off plain stupid, then grows smarter - just like us. Using a novel deep learning algorithm, a team at UC Berkeley demonstrated a robot that learns on the fly and performs various tasks that weren’t pre-programmed. 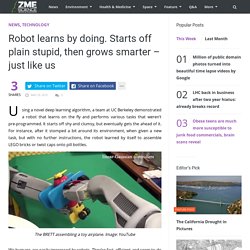 It starts off shy and clumsy, but eventually gets the ahead of it. For instance, after it stomped a bit around its environment, when given a new task, but with no further instructions, the robot learned by itself to assemble LEGO bricks or twist caps onto pill bottles. We humans are easily impressed by robots. They’re fast, efficient and seem to do most our jobs better than we’ll ever can. In fact, half of all jobs today (drivers, tellers, call center etc) could be replaced by bots within 20 years. The bot was developed using deep learning algorithms, which are inspired by the way human neural networks fire and interact to help us make sense of the world. Google’s StreetView or the equally impressive Siri are just a taste of what’s to come from the field of AI.

Low-cost Robot Designed for Safe Disposal of Unexploded Ordnance. Thousands of innocent civilians are killed each year by improvised explosive devices (IEDs) and explosive remnants of war (ERW) in dozens of countries with a legacy of conflict. 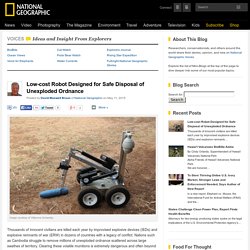 Nations such as Cambodia struggle to remove millions of unexploded ordnance scattered across large swathes of territory. Clearing these volatile munitions is extremely dangerous and often beyond what some of the hardest-impacted countries can afford. Golden West Humanitarian Foundation is an innovator in the global humanitarian mine action community, according to Cat Ramsey, a U.S. Department of State program manager for U.S. Conventional Weapons Destruction programs in East Asia and the Pacific. “We are proud to support their efforts to leverage advanced technology to support safe and sustainable ordnance destruction in developing countries.

DB: How does this new technology help address the situation? AT: Robotic EOD tools provide tactical options that greatly increase the safety of those trying to defuse IEDS.

Ethics and Philosophy. Human Interaction. Cute. ATOM-7xp. Myon – A humanoid robot for research. Myon is the world's first humanoid robot whose body parts can completely be removed during operation and flange-mounted again. 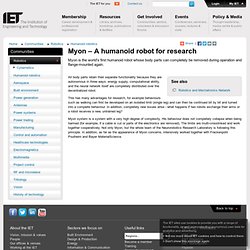 All body parts retain their separate functionality because they are autonomous in three ways: energy supply, computational ability, and the neural network itself are completely distributed over the decentralized robot. E-nuvo. The Nippon Institute of Technology, along with Harada Vehicle Design, ZMP, and ZNUG Design, have created an educational humanoid robot which they call e-nuvo, and its design has been based on its predecessor called the “walk”. 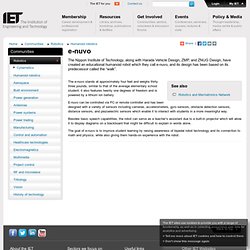 The e-nuvo stands at approximately four feet and weighs thirty three pounds, similar to that of the average elementary school student; it also features twenty one degrees of freedom and is powered by a lithium ion battery. E-nuvo HUMANOID. REEM. REEM is the latest prototype humanoid robot built by PAL Robotics in Spain. 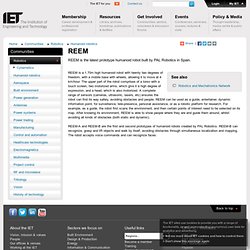 REEM is a 1.70m high humanoid robot with twenty two degrees of freedom, with a mobile base with wheels, allowing it to move at 4 km/hour. Reemb-brochure. REEM-B. SURENA. SURENA is a humanoid robot which has been developed and fabricated through a joint project between The R&D Society of Iranian Industries and Mines and Center for Advanced Vehicles (CAV) at University of Tehran. 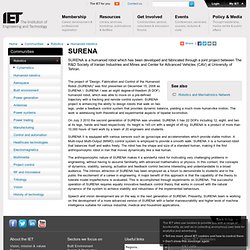 The project of “Design, Fabrication and Control of the Humanoid Robot (SURENA)” was first presented on December 15, 2008 as SURENA I. SURENA I was an eight degree-of-freedom (8 DOF) humanoid robot, which was able to move on a pre-defined trajectory with a tracking and remote control system. SURENA project is enhancing the ability to design robots that walk on two legs, under a feedback control system that provides dynamic balance, yielding a much more human-like motion.

The work is addressing both theoretical and experimental aspects of bipedal locomotion. On July 3 2010 the second generation of SURENA was unveiled. SURENA II is equipped with various sensors such as gyroscope and accelerometers which provide stable motion. Iran's Humanoid Robot Surena 2 Walking. NAO. HRP-4C. The HRP-4C is a female humanoid robot, created by the National Institute of Advanced Industrial Science and Technology - a Japanese research facility. 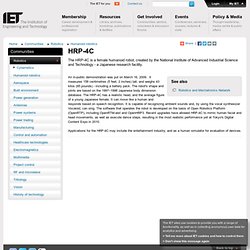 An in-public demonstration was put on March 16, 2009. It measures 158 centimetres (5 feet, 2 inches) tall, and weighs 43 kilos (95 pounds) - including a battery pack. The robot's shape and joints are based on the 1997–1998 Japanese body dimension database. ASIMO. ASIMO is the culmination of two decades of humanoid robotics research by Honda engineers. 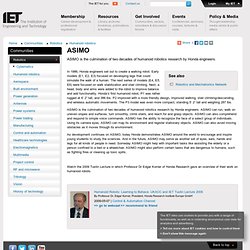 In 1986, Honda engineers set out to create a walking robot. Early models (E1, E2, E3) focused on developing legs that could simulate the walk of a human.