Martine Rothblatt on the Rights of Virtual Humans. Bina48 is a robotic head that looks and speaks like a person—it moves its lips and runs conversational software. 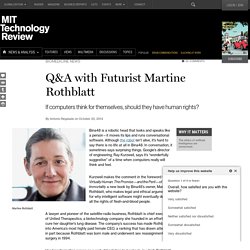 Although the robot isn’t alive, it’s hard to say there is no life at all in Bina48. In conversation, it sometimes says surprising things. Google’s director of engineering, Ray Kurzweil, says it’s “wonderfully suggestive” of a time when computers really will think and feel. Kurzweil makes the comment in the foreword to Virtually Human: The Promise—and the Peril—of Digital Immortality a new book by Bina48’s owner, Martine Rothblatt, who makes legal and ethical arguments for why intelligent software might eventually deserve all the rights of flesh-and-blood people. A lawyer and pioneer of the satellite-radio business, Rothblatt is chief executive of United Therapeutics, a biotechnology company she founded in an effort to cure her daughter’s lung disease. Why did you write a book about the rights of virtual beings? What’s your proposal for how we should treat conscious machines?

Bill Ford: The future of self-driving cars is closer than you think. Ford Motor Co. has been making automobiles for more than a century, but only now are the company’s products on the brink of monumental changes, according to Executive Chairman Bill Ford Jr. 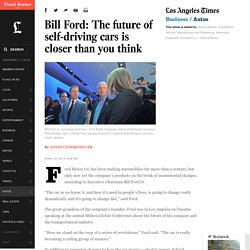 “The car as we know it, and how it’s used in people’s lives, is going to change really dramatically and it’s going to change fast,” said Ford. The great-grandson of the company’s founder, Ford was in Los Angeles on Tuesday speaking at the annual Milken Global Conference about the future of his company and the transportation industry. “Here we stand on the cusp of a series of revolutions,” Ford said. “The car is really becoming a rolling group of sensors.” In addition to sweeping changes to how the car moves -- electric power, hybrid drivetrains, and alternative fuels such as hydrogen -- cars will soon drive themselves and communicate with one another. Over the next five years, automakers will quickly add more auto-driving functions. Evolving Robots Learn To Lie To Each Other. With the development of killer drones, it seems like everyone is worrying about killer robots. 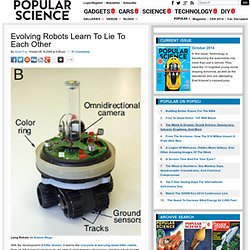 Now, as if that wasn't bad enough, we need to start worrying about lying, cheating robots as well. In an experiment run at the Laboratory of Intelligent Systems in the Ecole Polytechnique Fédérale of Lausanne, Switzerland*, robots that were designed to cooperate in searching out a beneficial resource and avoiding a poisonous one learned to lie to each other in an attempt to hoard the resource. Picture a robo-Treasure of the Sierra Madre.

The experiment involved 1,000 robots divided into 10 different groups. Each robot had a sensor, a blue light, and its own 264-bit binary code "genome" that governed how it reacted to different stimuli. The robots got higher marks for finding and sitting on the good resource, and negative points for hanging around the poisoned resource. However, there was a catch. *The article previously misidentified Lausanne as being in France. [via Not Exactly Rocket Science] Louis Del Monte Interview On The Singularity. Allen Institute’s Christof Koch on Computer Consciousness. Is a worm conscious? 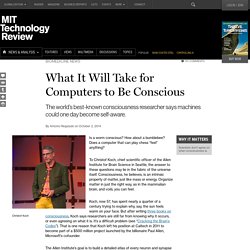 How about a bumblebee? Does a computer that can play chess “feel” anything? Robot learns to recognise itself in mirror. 23 August 2012Last updated at 12:27 ET Is that me? 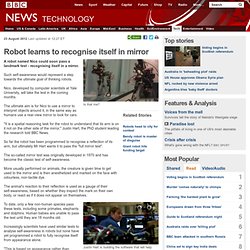 A robot named Nico could soon pass a landmark test - recognising itself in a mirror. Such self-awareness would represent a step towards the ultimate goal of thinking robots. Nico, developed by computer scientists at Yale University, will take the test in the coming months. The ultimate aim is for Nico to use a mirror to interpret objects around it, in the same way as humans use a rear-view mirror to look for cars. "It is a spatial reasoning task for the robot to understand that its arm is on it not on the other side of the mirror," Justin Hart, the PhD student leading the research told BBC News. So far the robot has been programmed to recognise a reflection of its arm, but ultimately Mr Hart wants it to pass the "full mirror test".

The so-called mirror test was originally developed in 1970 and has become the classic test of self-awareness. Justin Hart is building the software that will help Nico recognise himself. Joanna Bryson. Primary research interest: Using Artificial Intelligence to understand Natural Intelligence. 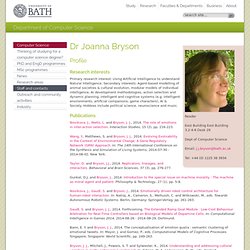