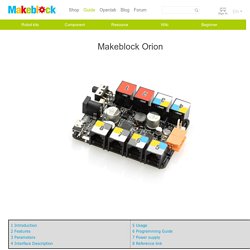 MiniBloq. ArcBotics - Moving the Robot. Introduction So you’ve unpacked your friend Sparki and now you’re getting to know more about the robot and how Sparki works. 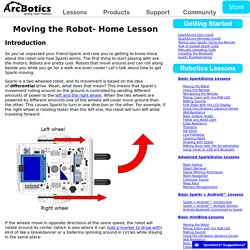 The first thing to start playing with are the motors. Robots are pretty cool. Sparki – The Easy Robot for Everyone. WaterColorBot. Gbargin Robot Car Kit for Arduino assembly. Best Arduino Robot Kit For Students. Robots provide fun and excitement for the tech lovers of all levels. 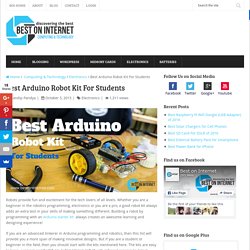 Whether you are a beginner in the robotics programming, electronics or you are a pro, a good robot kit always adds an extra test in your skills of making something different. Building a robot by programming with an Arduino starter kit always creates an awesome learning and designing experience! If you are an advanced tinkerer in Arduino programming and robotics, then this list will provide you a more span of making innovative designs. But if you are a student or beginner in the field, then you should start with the kits mentioned here. The kits are easy to learn, program and build an autonomous robot with infrared sensors to detect obstacles and navigate as you wish. This is the sparki Arduino DIY robot for beginners in programming, robotics or electronics. 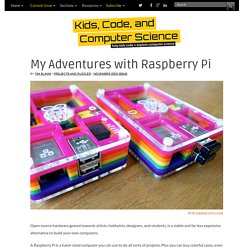 A Raspberry Pi is a hand-sized computer you can use to do all sorts of projects. Plus you can buy colorful cases, even build a case from Legos. This article starts with a video I watched that finally inspired me to buy a Pi and figure out what makes it so fun and interesting. Followed by lots of details about how to get started with your own Raspberry Pi projects. To begin, here's an amazing video to demonstrate the power of Sonic Pi, software for the Raspberry Pi to let anyone, especially little kids ages 5-8, learn a few programming basics AND make music: What's a Pi, or Raspberry Pi, or whatever it is called? This article describes what a Raspberry Pi is (not food, sorry) for those who don't know, how to set one up, how to download Sonic Pi, and how to use it to make music.

What is Raspberry Pi? 1. 2. 3. 4. 5. 10 Raspberry Pi Projects for Beginners. The Raspberry Pi is a great little machine—it’s very affordable, highly portable, and user-friendly. 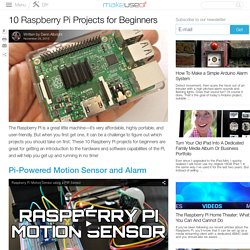 But when you first get one, it can be a challenge to figure out which projects you should take on first. These 10 Raspberry Pi projects for beginners are great for getting an introduction to the hardware and software capabilities of the Pi, and will help you get up and running in no time! Pi-Powered Motion Sensor and Alarm Sensors and alarms are often considered to be the domain of the Arduino, but the Raspberry Pi can work with hardware, too! Creating a simple motion sensor and piezo buzzer alarm will teach you the basics of working with external hardware with the Pi, and this particular project uses Python, so you’ll start learning a bit of that, too. Raspberry Pi Launches $5 Model Zero: Here's How It Compares. Yet again, the Raspberry Pi foundation has surprised the world. 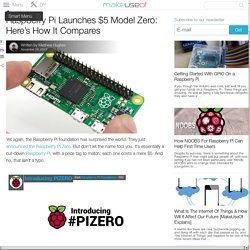 They just announced the Raspberry Pi Zero. But don’t let the name fool you. It’s essentially a cut-down Raspberry Pi, with a price tag to match: each one costs a mere $5. And no, that isn’t a typo. So, is it any good? What’s Inside? Although there are some pretty significant differences compared to the mainstream Raspberry Pi lineup, it feels deeply familiar. In terms of cold hard specifications, there’s very little that stands out compared to earlier models. This is very much a Raspberry Pi at its core. Admittedly a little bit obvious, it’s worth stressing how unfathomably tiny the Raspberry Pi Zero is.

Despite that, it’s compatible with most Raspberry Pi-based Internet of Things (IoT) projects. Of course, it goes without saying that a number of compromises were made in order to make the Raspberry Pi Zero so small, and so affordable. LittleBits. Raspberry Pi. Tips.