Candomblé, a religion of resistance: A maximum expression of black culture that has been Afro-Brazil's weapon of struggle and survival - Black Women Of Brazil. UN adds reggae music to list of international cultural treasures. African Americans, Caribbean diaspora's return to Africa is Ghana — Quartz Africa.

Immigrant from Cameroon and US Army Veteran Heine Nzumafo Launches Hiipe Where "Groupon Meets Whatsapp" The crowdfunding campaign for the Hiipe app launched on the Indiegogo platform. 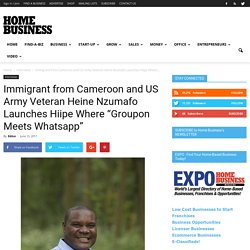 Hiipe is a new chat app that allows users to collect rewards for doing everything someone normally does with a smart phone, such as texting, talking on the phone and browsing the Internet. Hiipe users earn “smartpoints” every time they do simple things like send a text, receive a phone call, share files with other users, and surf the worldwide web. How many British African MPs will there be on Friday? By the numbers: A look at the data on African immigration to the U.S. With so much attention focused on United States immigration policy, the Pew Research Center issued an update Tuesday that looks at data about African immigrants and their growing presence in the U.S. 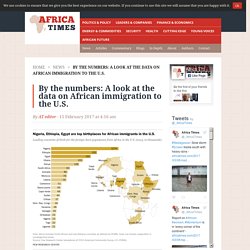 There were 2.1 million Africans living in the U.S. in 2015, more than double the number of 881,000 who left the continent in 2000. The Pew analysis of census data said while Africans still account for just 4.8 percent of all immigrants to the U.S., that’s up dramatically in recent years, and Africans had the fastest growth rate of 41 percent between 2000 and 2013. People from Nigeria, Ethiopia, Egypt, Ghana and Kenya accounted for half of the foreign-born African population in the U.S in 2015. “African immigrants from the sub-Saharan region are also more likely than immigrants overall to enter the U.S. through the diversity visa program – an act passed in 1990 to encourage immigration from underrepresented nations,” the Pew report said. Former Africa heads at Carlyle and KKR to set up regional investment firm. Jamaica seeks to open its skies to Kenya airlines in growth plan - Magazines.

Jamaica is holding talks with Kenya and South Africa as it seeks to enter into Open Skies agreements with five African countries. 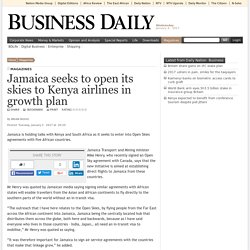 Jamaica Transport and Mining minister Mike Henry, who recently signed an Open Sky agreement with Canada, says that the new initiative is aimed at establishing direct flights to Jamaica from these countries. Mr Henry was quoted by Jamaican media saying signing similar agreements with African states will enable travellers from the Asian and African continents to fly directly to the southern parts of the world without an in-transit visa. Experts move against brain drain in Africa. Scientists map genome of African diaspora in the Americas. AURORA, Colo. 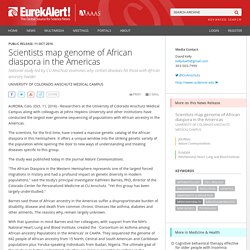 (Oct. 11, 2016) - Researchers at the University of Colorado Anschutz Medical Campus along with colleagues at Johns Hopkins University and other institutions have conducted the largest ever genome sequencing of populations with African ancestry in the Americas. The scientists, for the first time, have created a massive genetic catalog of the African diaspora in this hemisphere.

It offers a unique window into the striking genetic variety of the population while opening the door to new ways of understanding and treating diseases specific to this group. The study was published today in the journal Nature Communications. Restaurant review: African food at the mall? Get your fufu here. West Towne Mall’s food court is about the last place you’d expect to get a good, home-cooked West African meal. 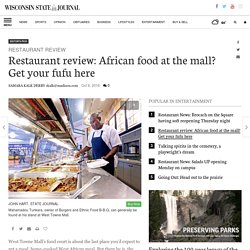 But there he is, the smiling Mahamadou Tunkara, running Burgers and Ethnic Food B-B-Q single-handedly, near the gelato spot. Early Sept. 11, 2001, Tunkara was working an overnight shift at the Sbarro in the World Trade Center in New York. He said he left at 8 a.m. to go to another job at Burger King (he had a third job at Wendy’s) just before the first plane hit at 8:46 a.m. Coffee brews up Oakland-Africa partnership. The youngest son of American legend and baseball great Jackie Robinson, David Robinson, ended up seeking a life far removed from his Connecticut childhood. 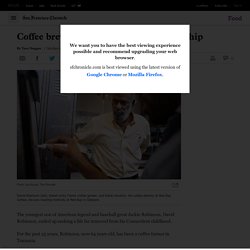 For the past 25 years, Robinson, now 64 years old, has been a coffee farmer in Tanzania. There, he has raised eight of his 10 children and helped organize a cooperative named Sweet Unity Farms. While he returns to the United States regularly as a board member of the Jackie Robinson Foundation and to conduct coffee business, he is now bringing his American and Tanzanian identities full circle. After Generations of Assimilation in Turkey, Afro-Turks are Fighting to Reclaim Their Heritage and Identity. Although this is unknown to many, there are up to 100,000 people of African descent in the nation of Turkey. 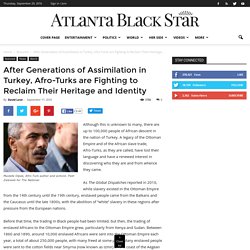 A legacy of the Ottoman Empire and of the African slave trade, Afro-Turks, as they are called, have lost their language and have a renewed interest in discovering who they are and from whence they came. As The Global Dispatches reported in 2010, while slavery existed in the Ottoman Empire from the 14th century until the 19th century, enslaved people came from the Balkans and the Caucasus until the late 1800s, with the abolition of “white” slavery in these regions after pressure from the European nations.

Before that time, the trading in Black people had been limited, but then, the trading of enslaved Africans to the Ottoman Empire grew, particularly from Kenya and Sudan. Between 1860 and 1890, around 10,000 enslaved Africans were sent into the Ottoman Empire each year, a total of about 250,000 people, with many freed at some point. Afropreneurs: Essie Bartels Aims to Be West Africa’s Premier Culinary Ambassador with Essiespice Okayafrica. After living on three continents and traveling across 25 countries, there’s one place where Essie Bartels has always felt at home—the kitchen. 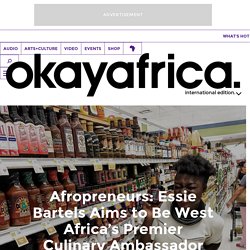 Growing up, she helped her mother and grandmother with dinner, and developed her own stovetop experiments for her father, who graded her on a scale from 1 to 10. “There were a lot of “9’s” and “10’s,” but every so often I’d get a “5,” which only made me try harder,” she laughs. When she moved to the United States to attend college, she continued cooking for friends who soon encouraged her to think of starting her own business. But with only a little bit of capital, she wondered what to do.

“I didn’t see myself having a restaurant, but I did see a gap in the market for spices and other condiments,” she says. Growth in African remittances expected to slow. DR Congo is one of many countries across Africa housing a large proportion of migrants in the continent. 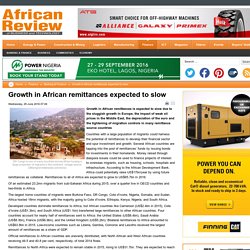 (Image source: DBlomgren/wikimedia commons) Countries with a large population of migrants could harness the potential of remittances to develop their financial sector and spur investment and growth. Africans Not in the Majority of Migrants Trying to Reach Europe Says ECA Executive Secretary. Kigali — Executive Secretary of the Economic Commission for Africa, Mr. 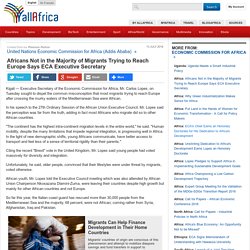 Carlos Lopes, on Tuesday sought to dispel the common misconception that most migrants trying to reach Europe after crossing the murky waters of the Mediterranean Sea were African. In his speech to the 27th Ordinary Session of the African Union Executive Council, Mr. Lopes said the perception was far from the truth, adding in fact most Africans who migrate did so to other African countries.

"The continent has the highest intra-continent migration levels in the entire world," he said. "Human mobility, despite the many limitations that impede regional integration, is progressing well in Africa. Citing the recent "Brexit" vote in the United Kingdom, Mr. This Nigerian Animator Is Bringing Diversity To Kid's Cartoons In Brazil.

Why #BlackLivesMatter is important for Africa - Ventures Africa. Senegal has joined the list of countries that have conducted protests in solidarity with the Black Lives Matter (BLM) movement in America. This march was put together after the unwarranted killing of two black men, Alton Sterling and Philando Castile by police officers in the US, last week. Protesters in the capital city of Senegal, Dakar, believe that the BLM movement should resonate with Africans and that there are definitive lessons to be taken away from it. Ghanaian Company Invests $9M in Failing Black Chicago Bank, Urges Africans and African-Americans to Help One Another. La transformation miraculeuse d’Haïti pourrait bénéficier à l’Afrique du Sud. Laurent Salvador Lamothe, ancien Premier Ministre d’Haïti, dispose d’un dynamisme incomparable et croit fermement que « quand on veut, on peut ».

Africans are one of the fastest-growing immigrant groups in America, and many are turning to politics as they navigate the complexities of a new society. African immigrants represent a small share of the U.S. population, but their numbers have been doubling every decade since 1970. In 2013, there were 1.8 million African immigrants living in the U.S., a huge increase from 80,000 in 1970, according to a 2015 Pew Research Center survey.

The African migrants giving up on the Chinese dream. At the foot of an unremarkable tunnel, peeling off the busy Little North Road, in Guangzhou, stands a place that just two years ago was totally unlike the rest of China. Angolan women carried bin bags of shopping on their heads, Somali men in long robes peddled currency exchange, Uygur restaurateurs slaughtered lamb on the street, Congolese merchants ordered wholesale underwear from Chinese-run shops, Nigerian men hit the Africa Bar for a Tsingtao and plate of jollof rice. Dengfeng -- a previously quiet urban village, or chengzhongcun, in central Guangzhou -- had been electrified by migration, both from internal Chinese migrants and those from Africa.

Today, that dream is fading -- if not finished. Over the past 18 months, although concrete numbers are hard to come by, hundreds -- perhaps even thousands -- of Africans are believed by locals and researchers to have exited Guangzhou. A promised land? How can Africans on the continent and in the diaspora find common ground and collaborate? World Cup 2010 opening ceremony. Image: BBC. This is what becoming a member of the African Union could mean for Haiti. Africa: Experts Weigh-in On Gains of Migration for Africa. African academic diaspora fellows initiative expands. The African diaspora fellowship initiative, brainchild of Malawi-born diaspora academic Dr Paul Zeleza, is building a platform from which to launch a ‘10-10’ initiative that will sponsor 1,000 diaspora scholars a year for 10 years to visit African universities for collaboration.