30 years since Mandela was freed, where does South Africa stand? February 11, 1990, was the day millions of black South Africans had been waiting decades for. 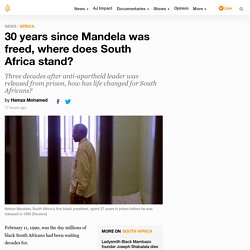 On that cloudless Sunday afternoon, Nelson Mandela walked out of Victor Verster Prison flanked by his wife Winnie Madikizela-Mandela, his right hand raised and fist clenched. A sea of excited supporters held back by police had lined up, all trying to get a glimpse of their just-freed leader who had spent 27 years in prison for fighting against the country's discriminatory apartheid system of racial segregation.

More: Embracing Nelson Mandela's contested legacy. Thirty years ago this week, I sat in front of a television, waiting for Nelson Mandela to walk through the gates of Cape Town's Victor Verster Prison, wondering what he would look like. 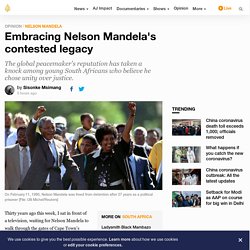 I was living in Nairobi at the time, part of a community of South Africans in exile. For weeks there were rumours swirling that Mandela would be out soon. I heard the adults whispering but dared not believe it could be true. On the day it finally happened I sat with my aunt and uncle. The propaganda films of apartheid-era South Africa. In 1973, a ground-breaking film, Joe Bullet, was screened - for the very first time - at the Eyethu Cinema in Soweto. 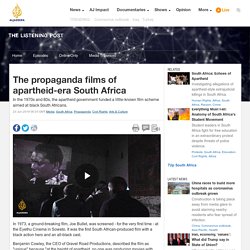 It was the first South African-produced film with a black action hero and an all-black cast. Benjamin Cowley, the CEO of Gravel Road Productions, described the film as "unique" because "at the height of apartheid, no one was producing movies with all-black cast members for black audiences". According to Tonie van der Merwe, the writer and producer of Joe Bullet, the apartheid censors banned the film after just two screenings. In a letter, the censors listed the reasons for their decision which included: the main character carrying a gun, driving a sports car, living in a white neighbourhood.

"Stupid, stupid reasons," said van der Merwe. While Joe Bullet was a commercial failure, it demonstrated that there was a huge demand in South Africa for films like it; however, without the apartheid censors' approval, there was a good chance that they would be banned. Documenting the bloody transition from apartheid. Photographs have a life free of context and explanation. 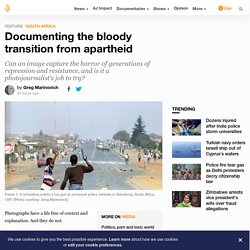 And they do not. When discussing an image, I am often torn between what we can see in the image and that which we cannot. This is especially so when the images have emerged from a place and time that has a complex, perhaps contradictory, history. Resources Page – Apartheid Museum. Sun City - A Teaching Guide - Zinn Education Project. The performers included Miles Davis, Bob Dylan, Peter Gabriel, Jimmy Cliff, Bruce Springsteen, Jackson Browne, Run-D.M.C, and Lou Reed. 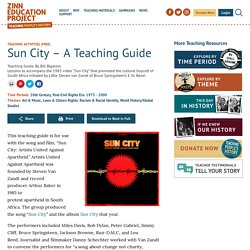 Journalist and filmmaker Danny Schechter worked with Van Zandt to convene the performers for “a song about change not charity, freedom not famine.” Schechter also produced two films: Sun City (see below) and The Making of Sun City. Read more about the Sun City album in a Rolling Stone article, where it was named one of the 100 best albums of the 1980s. Funds raised from Sun City are presented to the ANC president Oliver R.

Tambo. The refrain of “I ain’t gonna play Sun City” is a simple one, but the issues raised in the song and film are not. While this guide offers many teaching ideas for “Sun City,” it does not attempt to provide a comprehensive look at the apartheid structures. It is recommended that this curriculum be taught before students view the “Sun City” video. Published by Africa World Press. How Nelson Mandela Bent History by Mark Suzman. South Africa elections: Charting divides 25 years after apartheid. Image copyright Getty Images The quality of life may have improved for many South Africans since the landmark 1994 elections that ended white-minority rule but huge inequalities remain. 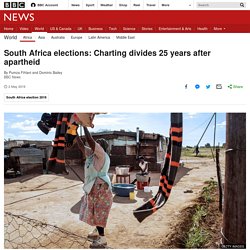 As South Africans prepare to go to the polls on 8 May, we take a look at how much has changed. Think Again: Nelson Mandela. "Mandela’s Legacy Is Unblemished. 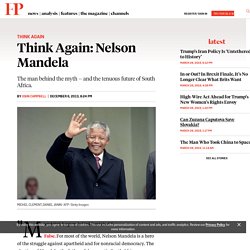 " False. Nelson Mandela and FW de Klerk: Enemies for peace. On February 11, 1990, South Africa - and the world - turned its eyes to Victor Verster prison to see Nelson Mandela released after 27 years in captivity. 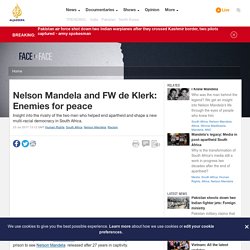 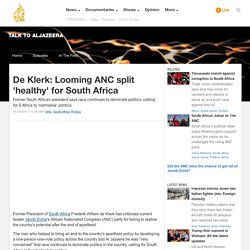 The man who helped to bring an end to the country's apartheid policy by developing a one-person-one-vote policy across the country told Al Jazeera he was "very concerned" that race continues to dominate politics in the country, calling for South Africa to "normalise" its politics. 'The ANC is being torn apart' "[South Africa needs to move] away from ethnically driven politics towards policy-driven politics where people ... irrespective of race or colour can ... work together because they believe in the same things," he told Al Jazeera's Yehia Ghanem. Pointing to poor economic policy and corruption under Zuma, de Klerk said that the ANC could not continue to exist in its current form.

"It cannot last. Facinghistory. Is there a future for White Afrikaners? - BBC Our World. Apartheid Indefensible. See the Photos That Gave Americans Their First Glimpse of Apartheid in 1950. How Photojournalist Margaret Bourke-White Showed Apartheid to Americans. Bob Herbert on Nelson Mandela: 1918–2013 » Zinn Education Project.

Even though it had been expected, I was jolted when I got the phone call with the news that after many long decades the defiant fire of resistance had gone out and Nelson Mandela had died. 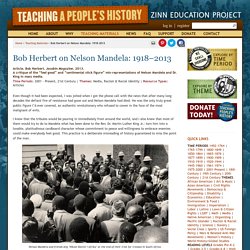 He was the only truly great public figure I’d ever covered, an authentic revolutionary who refused to cower in the face of the most malignant of evils. I knew that the tributes would be pouring in immediately from around the world, and I also knew that most of them would try to do to Mandela what has been done to the Rev. Dr. Martin Luther King Jr.: turn him into a lovable, platitudinous cardboard character whose commitment to peace and willingness to embrace enemies could make everybody feel good. Media - apartheid in south africa. A Brief History of South Africa, with Dave Steward. BBC Two - Witness, Apartheid, South Africa - Clips. Unequal scenes as educational tools. On my first trip to Cape Town, South Africa in 2014, Renfrew Christie, recently retried university administrator, offered to give me a tour of the city. We climbed high up into Bishopscourt, a rich suburb on Table Mountain’s edge, where Renfrew informed that our tour would be like peeling back the layers of an onion.

I didn’t understand what he meant, but by the time we reached the Cape Flats, the vast sandy expanse of working class neighborhoods in the city, I did. Traveling through the neighborhoods of Cape Town is like peeling back the layers of an onion because each neighborhood, from Bishopscourt down to the Cape Flats, is racially and economically stratified from the one that comes before it.

Although I knew these divisions existed, seeing them unfold in real time as we drove through the city opened my eyes in ways that reading about these areas never could. Looking straight down from a height of several hundred meters, incredible scenes of inequality emerge. Related. Culture - The photos that changed history.

“You wait for things to come together, and it all has to happen in a hundredth of a second,” says the Magnum photographer Ian Berry. “Because very frequently you don’t have another chance.” The Last White Africans. NPR : South Africa, 10 Years Later. THE MATRIARCHS OF MTHATHA. Eastern Cape, South Africa - Across the hills of the Eastern Cape, goats and cows graze between traditional isiXhosa huts. Overhead, grey clouds threaten to break the heavy humidity that hangs over this community. Nearly 20 women have gathered at a rural community centre to share their stories.

They all have a similar theme: how they became breadwinners and parents to their grandchildren in their old age. The Eastern Cape is the birthplace of South African heroes such as Nelson Mandela, Steve Biko, Walter Sisulu and Thabo Mbeki, and yet, remains one of the poorest regions in the country. We, as women of this area, took a decision to support one another - Nozukhile Hadi. Long Night's Journey Into Day.Documentary 2000.

Primary Sources - HIST 3377: History of South Africa - Library Research Help at Southern Methodist University. The return of South Africa's Black Christ. One of South Africa's most controversial paintings has gone on display more than 40 years after it was banned by the apartheid government. The Black Christ depicts former African National Congress leader Chief Albert Luthuli being crucified by former Prime Minister Hendrik Verwoerd and his Justice Minister John Vorster. The oil painting, which was the creation of Cape Town artist Ronnie Harrison back in 1961, now hangs in the National Gallery in Cape Town. It forms the centrepiece of an exhibition on 10 years of democracy. The picture has an extraordinary history.

It was considered blasphemous and subversive by the South African government, which tried to have it destroyed. Nelson Mandela's First TV Interview, May 1961 - Alexis C. Madrigal. The year was 1961. Nelson Mandela was already a wanted man. Apartheid would not end for 33 years. IB: Rights and Protest, Apartheid.

The local authorities recently fixed a row of damaged toilets that had been abandoned inside a neighbouring building and which are used by the hostel's residents, but failed to fit doors, leaving those using them exposed to passers-by. In a quest for privacy, Songeziwe says locals recycled old doors and painted planks to cover the entrance to each of the cubicles. Africa: South Africa. Turning%20Points%20in%20History. The Revolution in South African Historiography. Book 3: Migration, Land and Minerals in the Making of South Africa - Chapter 3 - The Socio-economic Impact of the Mineral Revolution on South African Society by Drusela Numvuzo Yekela.