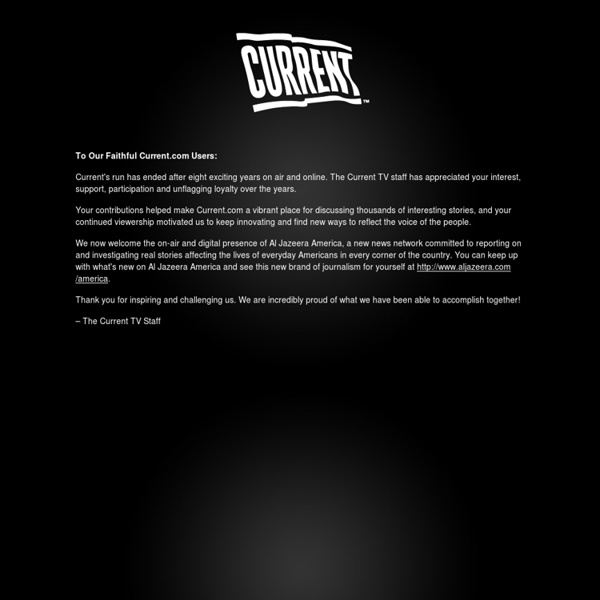 To Our Faithful Current.com Users: Current's run has ended after eight exciting years on air and online. The Current TV staff has appreciated your interest, support, participation and unflagging loyalty over the years. Your contributions helped make Current.com a vibrant place for discussing thousands of interesting stories, and your continued viewership motivated us to keep innovating and find new ways to reflect the voice of the people. We now welcome the on-air and digital presence of Al Jazeera America, a new news network committed to reporting on and investigating real stories affecting the lives of everyday Americans in every corner of the country. You can keep up with what's new on Al Jazeera America and see this new brand of journalism for yourself at Thank you for inspiring and challenging us. – The Current TV Staff

Predator takes visual object tracking to new heights – Computer Chips & Hardware Technology Cameras have slowly made their way into the portable gadgets we all carry around with us and not having a camera in a new device is viewed as a missing feature. It’s got to the point now where the latest smartphones even have two cameras so as to make for better video chat. But while the prevalence and quality of the cameras has gone up, the software still lags behind in terms of being able to identify and track objects in any real-time or captured footage. That is about to change due to the work of Czech student Zdeneki Kalai. Working on his Ph.D at the University of Surrey he has created a new visual object tracking algorithm called Predator that blows away everything that has come before it in the consumer-space at least. This algorithm not only tracks, it learns the more it gets used.

Chomsky Has Some Advice for the Occupiers Chomsky Has Some Advice for the Occupiers Posted on Nov 5, 2011 Noam Chomsky had a simple message for protesters at Occupy Boston last month: To change their country, they must first get the public on their side. Then they can make big demands. The numerous bonds and associations forged within the nationwide Occupy movement over the past weeks mark a significant development in American social history, he said, and efforts should be made to extend such relationships into the rest of the country. 'Luka Magnotta : FBI Criminal Profiling Info', luka_magnotta Thursday, 14 August 2008 at 14:05 This is very interesting, thought Id share it with you all. The FBI method of profiling is a system created by the Federal Bureau of Investigation. It is used to detect and classify the major personality and behavioural characteristics of an individual based upon analysis of the crime or crimes the person committed. The FBI method of profiling is the approach most commonly used by profilers in the United Kingdom, the Netherlands, and other European countries.

Can an Algorithm Write a Better News Story Than a Human Reporter? Had Narrative Science — a company that trains computers to write news stories—created this piece, it probably would not mention that the company’s Chicago headquarters lie only a long baseball toss from the Tribune newspaper building. Nor would it dwell on the fact that this potentially job-killing technology was incubated in part at Northwestern’s Medill School of Journalism, Media, Integrated Marketing Communications. Those ironies are obvious to a human. Flavonoid Molecular structure of the flavone backbone (2-phenyl-1,4-benzopyrone) Isoflavan structure Neoflavonoids structure Flavonoids (or bioflavonoids) (from the Latin word flavus meaning yellow, their colour in nature) are a class of plant secondary metabolites.

With mobile tech, mapping a city’s emotions, memories PHILADELPHIA -- What can technologies do for us to help us understand what's going on in the city? University of Pennsylvania urban planning professor Amy Hillier took to the stage here at the second annual TEDxPhilly conference on Tuesday to demonstrate how technology could one day help us look beyond statistics to visualize the very experience of a city. "Could we map emotion? Memory?

Chris Hedges Arrested in Front of Goldman Sachs BLANKChris Hedges made this statement in New York City’s Zuccotti Park on Thursday morning during the People’s Hearing on Goldman Sachs, which he chaired with Dr. Cornel West. The activist and Truthdig columnist then joined a march of several hundred protesters to the nearby corporate headquarters of Goldman Sachs, where he was arrested with 16 others. Chris Hedges’ statement in Zuccotti Park: Goldman Sachs, which received more subsidies and bailout-related funds than any other investment bank because the Federal Reserve permitted it to become a bank holding company under its “emergency situation,” has used billions in taxpayer money to enrich itself and reward its top executives.

This interactive map of the Gulf Stream allows you to see how this current provides heat for Northern Europe. Click on the Next button on the bottom left of the map to start the explanation. by cgreynolds Apr 14

Please refer to this video by Alan Watts, it says sooo much more about our attitudes to "LIFE" as the Earth/Nature would create it and our "interference with the process". by cdancer Nov 10