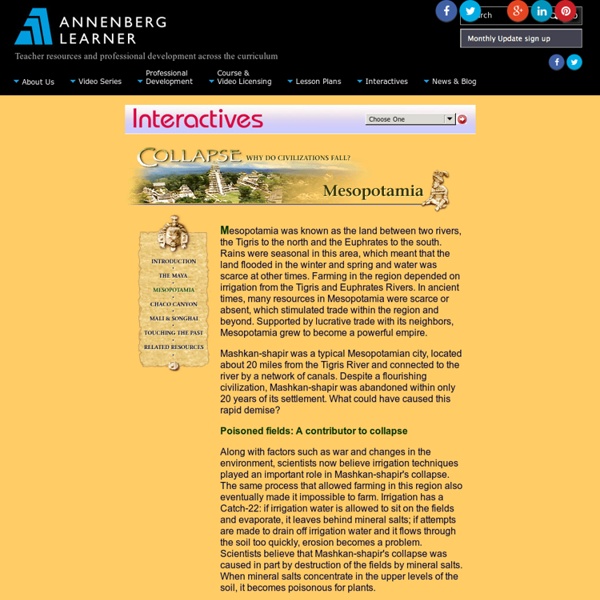 Mesopotamia was known as the land between two rivers, the Tigris to the north and the Euphrates to the south. Rains were seasonal in this area, which meant that the land flooded in the winter and spring and water was scarce at other times. Farming in the region depended on irrigation from the Tigris and Euphrates Rivers. In ancient times, many resources in Mesopotamia were scarce or absent, which stimulated trade within the region and beyond. Supported by lucrative trade with its neighbors, Mesopotamia grew to become a powerful empire. Mashkan-shapir was a typical Mesopotamian city, located about 20 miles from the Tigris River and connected to the river by a network of canals. Poisoned fields: A contributor to collapse Along with factors such as war and changes in the environment, scientists now believe irrigation techniques played an important role in Mashkan-shapir's collapse. In Mesopotamia, irrigation was essential for crop production. Could this happen today? Related:  Ancient History

Mesopotamia, A History of. A Place For Civilization To Begin Mesopotamia Edited By: Robert Guisepi Mesopotamia is a region, not a country. Refer to the individual Peoples that made up Mesopotamia; the Sumerians, Akkadians, Babylonians, Assyrians, Chaldeans, and to some degree the Hittites, Phoenicians and Persians In the narrow sense, Mesopotamia is the area between the Euphrates and Tigris rivers, north or northwest of the bottleneck at Baghdad, in modern Iraq; it is Al-Jazirah ("The Island") of the Arabs. Questions as to what ancient Mesopotamian civilization did and did not accomplish, how it influenced its neighbors and successors, and what its legacy has transmitted are posed from the standpoint of 20th-century civilization and are in part colored by ethical overtones, so that the answers can only be relative. Mesopotamia and Education As a civilization contemporary with Egyptian civilization, Mesopotamia developed education quite similar to that of its counterpart with respect to its purpose and training. Back to Main menu World History Center

Highlights from the Collection: Mesopotamia | The Oriental Institute of the University of Chicago Mesopotamia - the land between the rivers, the Tigris and the Euphrates - is an ancient Greek term used by archaeologists to refer to the area now roughly equivalent to the modern country of Iraq. The Mesopotamian collection of the Oriental Institute Museum was acquired almost exclusively through archaeological excavations. The first of these - the University of Chicago Oriental Exploration Fund's expedition to Bismaya (ancient Adab) - worked in Iraq from 1903-1905. During the 1930's the Babylonian Section of the Iraq Expedition excavated four sites on the lower Diyala River, and today the Nippur Expedition is continuing its work, begun in 1948, at the holy city of Nippur. Foundation Figurine of King Ur-Nammu King Ur-Nammu rebuilt and enlarged one of the most important temples in ancient Mesopotamia - the E-kur of Enlil, the chief god of the pantheon. Striding Lion Four-Lugged Vessel Female Figurine Cup Supported by Hero and Animals Four-Faced God and Goddess Sumerian Statuette Banquet Plaque

Mesopotamia Ancient Civilization Contributions and Accomplishments - Birth of a City - Sumerian Art - Religion in Mesopotamia - Music - Writing Contributions of Mesopotamia Artifact - An artifact is a product of a particular time and place, more than that it represents the IDEAS and TECHNOLOGY of a particular civilization. When does an artifact become art? Many examples of artifacts are not what we'd call art in our society... yet when we look at these artifacts they make us think...and wonder...about the culture that produced it. Sumerian Accomplishments We know from relieve sculptures dating to 850 BC that the Sumerians were capable of using the wheel. So-without this ancient TECHNOLOGY back in 2500 BC, the STUNNING arts of Sumer wouldn't have been. MESOPOTAMIA - This region is known as the Fertile Crescent or land between the rivers-the Tigris and Euphrates. This region had two landscapes-the Northern Zone was mountainous. The people in the Mesopotamia region led us toward civilization.

Ancient Mesopotamia - The Sumerians Ancient Mesopotamia and the Sumerians The word Mesopotamia comes from Greek words meaning "land between the rivers." The rivers are the Tigris and Euphrates. Lower Mesopotamia is located the modern country of Iraq, while Upper Mesopotamia is in Syria and Turkey. Mesopotamia is considered the cradle, or beginning, of civilization. The Sumerians were the first people to migrate to Mesopotamia, they created a great civilization. A typical Sumerian city-state, notice the ziggurat, the tallest building in the city. The Sumerians had a common language and believed in the same gods and goddesses. Watch the video clip below from Discovery Education, as Nissaba, a young Sumerian girl, talks about her people's accomplishments. (By clicking on any links the user is leaving the Penfield School District website, the district is not responsible for any information associated with these links.) In 1922, English archaeologist, C. The Akkadian Empire stretched across all of Mesopotamia.

The Seven Wonders - Hanging Gardens of Babylon Some stories indicate the Hanging Gardens towered hundreds of feet into the air, but archaeological explorations indicate a more modest, but still impressive, height. (Copyright Lee Krystek, 1998) The city of Babylon, under King Nebuchadnezzar II, must have been a wonder to the ancient traveler's eyes. "In addition to its size," wrote Herodotus, a Greek historian in 450 BC, "Babylon surpasses in splendor any city in the known world." Herodotus claimed the outer walls were 56 miles in length, 80 feet thick and 320 feet high. While archaeological excavations have disputed some of Herodotus's claims (the outer walls seem to be only 10 miles long and not nearly as high) his narrative does give us a sense of how awesome the features of the city appeared to those ancients that visited it. Gift for A Homesick Wife According to accounts, the gardens were built to cheer up Nebuchadnezzar's homesick wife, Amyitis. The Water Problem Turning the screw can be done by a hand crank. Garden Construction

Religion of Mesopotamia Fast Facts About Mesopotamia | Mesopotamian Religion We can only speculate about early religion. When the ancient cave painters drew animals on the walls of their caves, this may have been part of a belief in the magic of animism. Neanderthals buried their dead with objects, presumably so they could be used in the afterlife. By the time mankind was banding together in cities or city-states, structures for the gods -- like temples -- dominated the landscape. 4 Creator Gods Ancient Mesopotamians attributed the forces of nature to the workings of divine forces. The highest of the four creator gods was the sky-god An, the over-arching bowl of heaven. These four Mesopotamian gods did not act alone, but consulted with an assembly of 50, which is called the Annunaki. How the Gods Helped Mankind The gods bound people together in their social groups and were believed to have provided what they needed to survive. Priests Source: Chester G. Want More?

Learning about Ancient Mesopotamian Religion and Culture Located in the Tigris-Euphrates valley was the land of Mesopotamia. It was here that the world’s first cities were founded between 4000 – 3500 BC by the Sumerian people. They developed their own belief system, with a variety of gods and goddesses. They developed religious practices and rituals for worshiping these powerful deities. Their daily lives were also much different than those of the previous hunter-gatherer groups that wandered the world in a constant search for resources. The cultures of Mesopotamia had a polytheistic belief system, which means that the people believed in multiple gods instead of just one. Each city had its own patron deity, some of which were connected to specialized occupations. Some of the most important deities of ancient Mesopotamia were: An (Anu) – Sky god, as well as father of the gods, An was the king of all the gods. Enki (Ea) - God of fresh water, known for his wisdom. Inanna (Ishtar) – Goddess of love, fertility, and war.

Phillip Martin's You Be the Judge of Hammurabi's Code Hammurabi, the Priest King Hammurabi (ca. 1792 - 1750 BC) united all of Mesopotamia under his forty-three year reign of Babylon. Although Hammurabi's Code is not the first code of laws (the first records date four centuries earlier), it is the best preserved legal document reflecting the social structure of Babylon during Hammurabi's rule. About the Code Two hundred eighty-two laws, concerning a wide variety of abuses, justify Hammurabi's claim of having acted "like a real father to his people . . . [who] has established prosperity . . . and (gave) good government to the land." See for Yourself The laws were discovered in 1901 on a stela now in the Louvre Museum of Paris, France. What Other Have to Say Every now and then, I hear from people who enjoy the site.

Mesopotamia - LookLex Encyclopaedia Mesopotamia's fame in world history relates to it being one of the cradles of civilization, it is by many considered home to the very first civilization in history, predating even Ancient Egypt. Mesopotamia corresponds to modern Iraq, it is defined as the land of the fertile lowlands and lower surrounding mountains where the rivers Euphrates and Tigris run parallel out to the Persian Gulf. The wider definition of Mesopotamia is the lands that that lies west of the Zagros mountains and south of the Anti-Taurus mountains, north of the Arabian plateau, and east of the fertile western Syria. This includes modern Iraq, eastern Syria and southeastern Turkey. The history of Mesopotamia runs strong from the middle of the 4th millennium BCE, lasting a good 3,000 years. The name 'Mesopotamia' comes from Greek, and means 'between rivers'. It was the two rivers that became the basis upon which the wealth of the region was based. Confused?

Mesopotamia and the Fertile Crescent Before they settled down in various parts of the world, humans lived as nomads for tens of thousands of years. Nomads are people who have no permanent home and travel in search of food and safety. A typical nomadic group might include an extended family of about ten adults and their children. advertisement Civilization developed slowly in different parts of the world. The Fertile Crescent is a boomerang-shaped region that extends from the eastern shore of the Mediterranean Sea to the Persian Gulf. Some of the best farmland of the Fertile Crescent is on a narrow strip of land between the Tigris and the Euphrates Rivers. Many different civilizations flourished in this small region.