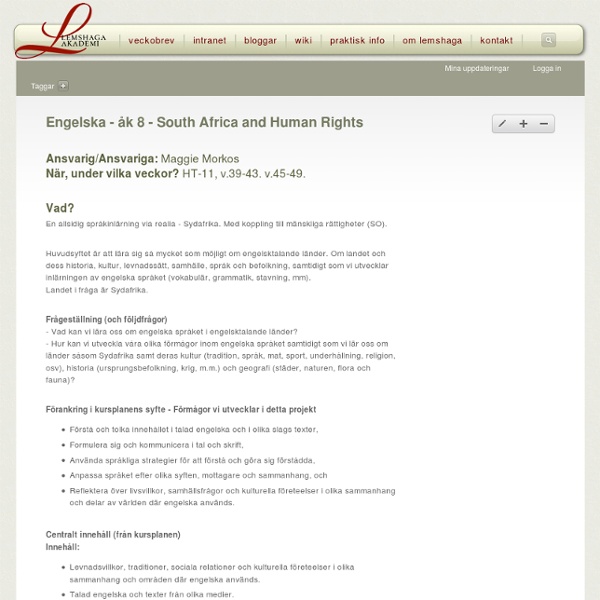 What can we learn from Nelson Mandela to make a difference? - Official WizIQ Teach Blog 539 Flares Twitter 1 Facebook 532 Google+ 3 LinkedIn 3 inShare3 539 Flares × We teach language to help people communicate. Why do people want to communicate? ​ ​To express the human story through myth, inspiration and powerful transformation. ​ ​Let’s dig deeper into the story of Nelson Mandela and helps our students think, communicate and become active narrators in the search for peace and what makes us human. Image credit: Paul Don Smith Nelson Mandela - Facts & Summary Nelson Mandela was born on July 18, 1918, into a royal family of the Xhosa-speaking Thembu tribe in the South African village of Mvezo, where his father, Gadla Henry Mphakanyiswa (c. 1880-1928), served as chief. His mother, Nosekeni Fanny, was the third of Mphakanyiswa’s four wives, who together bore him nine daughters and four sons. After the death of his father in 1927, 9-year-old Mandela—then known by his birth name, Rolihlahla—was adopted by Jongintaba Dalindyebo, a high-ranking Thembu regent who began grooming his young ward for a role within the tribal leadership. The first in his family to receive a formal education, Mandela completed his primary studies at a local missionary school.

Africans are all poor and 15 other myths There are some pretty strange rumours floating around about Africa. I think we’re all on the same page about the continent/country issue now (it’s a continent, to be clear) but we’ve still got a long way to go. I definitely used to believe some of these...did you? 1.Africa’s not that big This is the real size of Africa. Pretty big, right?

South Africa profile - overview South Africa has one of the continent's biggest and most developed economies. Up until 1994 it was ruled by a white minority which enforced a separation of races with its policy called apartheid. The apartheid government eventually negotiated itself out of power after decades of international isolation, armed opposition and mass protests. South Africa: Maps, History, Geography, Government, Culture, Facts, Guide & Travel/Holidays/Cities South Africa, on the continent's southern tip, is bordered by the Atlantic Ocean on the west and by the Indian Ocean on the south and east. Its neighbors are Namibia in the northwest, Zimbabwe and Botswana in the north, and Mozambique and Swaziland in the northeast. The kingdom of Lesotho forms an enclave within the southeast part of South Africa, which occupies an area nearly three times that of California.

Where I'm From, a poem by George Ella Lyon, writer and teacher “Where I'm From” grew out of my response to a poem from Stories I Ain't Told Nobody Yet (Orchard Books, 1989; Theater Communications Group, 1991) by my friend, Tennessee writer Jo Carson. All of the People Pieces, as Jo calls them, are based on things folks actually said, and number 22 begins, “I want to know when you get to be from a place. ” Jo's speaker, one of those people “that doesn't have roots like trees, ” tells us “I am from Interstate 40” and “I am from the work my father did. ” In the summer of 1993, I decided to see what would happen if I made my own where-I'm-from lists, which I did, in a black and white speckled composition book. I edited them into a poem — not my usual way of working — but even when that was done I kept on making the lists. The process was too rich and too much fun to give up after only one poem.

All About South Africa Jun 08, 2010 Seeing as the 2010 FIFA World Cup happened in South Africa, we thought it’d be cool to learn a bit more about the beautiful country, which has definitely been through its fair share of tough times. South African Kids Of all the countries on the continent of Africa, South Africa’s the most diverse in terms of its territory. Breaking News English ESL Lesson Plan on Racism An 80-year-old man has been found guilty in the killing of three men 41 years ago. A jury in Mississippi decided Edgar Ray Killen organized the murder of three civil rights workers in June 1964. He escaped murder charges but may spend up to twenty years in prison for manslaughter.

Africa Lesson Plans and Resources In addition to the printables that can be used for any country study, I make additional sheets for specific countries ~ mapping activities and flag notebooking sheets {and sometimes more!}. Our studies of Africa include units on the following countries:EgyptKenyaMoroccoNigeriaSouth AfricaTanzaniaBelow I have included links to the printables for each country as well as links for our favorite books and resources, along with blog posts that provide some great websites to help you in your study of that country. We took three weeks to study the country of Egypt and focused quite a bit on mummies and pyramids. Egypt is such a HUGE country to study with amazing history that could last for an entire year, and we only tapped into a little bit of what we could have. Our study included mummifying apples, making doll mummies and working on a small lapbook of things we had learned.

The School System A child may begin schooling with grade 0 (also called reception, or grade-R) from the age of four. Grades 1 to 9 are compulsory and classified as General Education and Training (GET). Grades 11 and 12, Further Education and Training (FET), are non-compulsory; qualification at this level with a matriculation certificate is required to enter tertiary education.