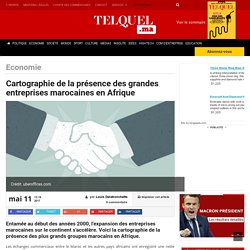 How can Africa leverage the potential of cross-border infrastructure to address critical economic bottlenecks, boost regional integration and intra-African trade, and create employment for the continent’s growing population? 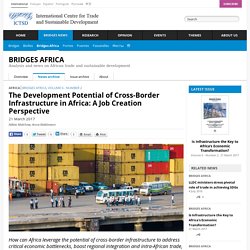 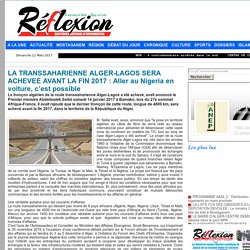 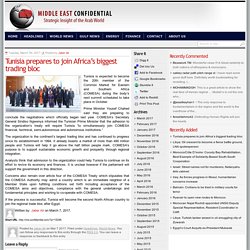 Prime Minister Yousef Chahed said they are preparing to conclude the negotiations which officially began last year. COMESA’s Secretary General Sindiso Ngwenya informed the Tunisian Prime Minister that the adhesion to the organization’s treaty will require Tunisia “to simultaneously join COMESA financial, technical, semi-autonomous and autonomous institutions.” The organization is the continent’s largest trading bloc and has continued to progress since its establishment in 1994. It already boasts a market of more than 490 million people and Tunisia will help it go above the half billion people mark. COMESA’s purpose is to support sustainable economic growth and prosperity through regional integration. Written by: Jaber Ali on March 7, 2017. Maroc-Ghana : deux fonds souverains pour un partenariat stratégique. Road linking Ethiopia and South Sudan to be constructed. Two major roads linking Ethiopia and South Sudan are set to be constructed following the signing of an agreement by the two countries. 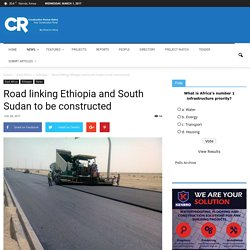 Also read:Opec bolsters road construction in Ethiopia Ethiopian Prime Minister Hailemariam Desalegn and South Sudanese President Salva Kiir last week signed several bilateral agreements that include the immediate commencement of construction of two major road links. They agreed that the construction will commence with immediate effect, to start the construction of the Gamebella – Pagak – Palouge and Dima – Raad – Boma – Bor roads. “When they get the peace back and the economy gets stronger, they will pay us back,” said Mr Hailemariam, indicating that Ethiopia would finance the construction of the roads within South Sudan. They said once the project is over the two countries’ trade agreement will be on the rise and that will see the locals improve their lives.

African Corridor Alliance established to stimulate development. Staff Reporter Windhoek-Transport is a significant sector in that it reduces transactional costs in enhancing trade. 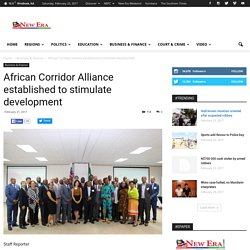 To facilitate infrastructure development, governments promote the expansion and improvement of development corridors. Corridors are the focal point for regional development initiatives. Transport corridors have been around for centuries, but it is only in the last few decades that they have been recognized for what they are and, more importantly, what they can become as well as the value they can add to economic growth. Rwanda, Mali airspace agreement to boost trade. Trade and tourism between Rwanda and Mali could flourish following a new bilateral Airspace Service Agreement signed yesterday in Kigali. 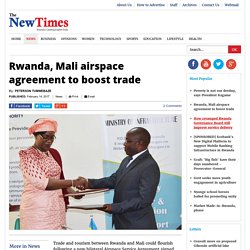 Both countries agreed to open their airspace allowing their national carriers to operate without restrictions. According to the agreement, all air service operations will be conducted under the fifth freedom arrangement, which means an airline has the right to carry passengers from one country to another and from that country to a third country. Media houses were present to cover the event. Sam Ngendahimana. Les délégués africains discutent sur les éléments techniques de l’Accord sur la ZLEC. How African countries are working together to light up the continent.

Njoki Ngethe could barely hear the cry of her newly born baby as she was gasping for air in the operating theatre. 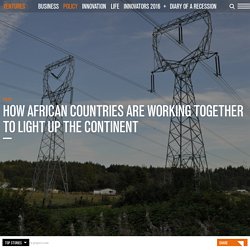 The doctors and nurses put in every effort to resuscitate her but failed. The doctors had argued that she had eaten before the surgery which caused complications. However, the unspoken element of the unfortunate event was that the incident was escalated by a power outage coupled with the unavailability of a functioning generator in the hospital. Mrs Ngethe had lost 1.2 litres of blood after the outage. Ngethe’s loss in 2008 amongst many other tragic incidents fully describe the anguish of a dark continent. The ravaging effect of blackouts and electricity outages in Africa has led to the pressing desire for improved electricity, being initiated in all discussion platforms. Last week, the East Africa Power Pool (EAPP) announced that its proposed power grid project that would run from Cairo to Cape Town, South Africa would commence in April this year. Comments. L’Afrique: Destination phare des exportations marocaines. Benin hit by Nigeria's car import ban. Surveying his sprawling car dealership on the fringes of Benin’s commercial hub Cotonou, Kassem Hijazi alternates between chainsmoking Marlboro cigarettes and puffing on a hookah. 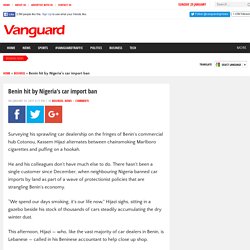 He and his colleagues don’t have much else to do. There hasn’t been a single customer since December, when neighbouring Nigeria banned car imports by land as part of a wave of protectionist policies that are strangling Benin’s economy. “We spend our days smoking, it’s our life now,” Hijazi sighs, sitting in a gazebo beside his stock of thousands of cars steadily accumulating the dry winter dust. This afternoon, Hijazi — who, like the vast majority of car dealers in Benin, is Lebanese — called in his Beninese accountant to help close up shop. Uganda gets $151m loan for expressway to Rwanda. The African Development Bank (AfDB) has agreed to loan Uganda $151m to build an expressway to Rwanda. 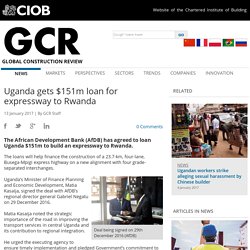 The loans will help finance the construction of a 23.7-km, four-lane, Busega-Mpigi express highway on a new alignment with four grade-separated interchanges. Deal being signed on 29th December 2016 (AfDB) Uganda’s Minister of Finance Planning and Economic Development, Matia Kasaija, signed the deal with AfDB’s regional director general Gabriel Negatu on 29 December 2016. Matia Kasaija noted the strategic importance of the road in improving the transport services in central Uganda and its contribution to regional integration. He urged the executing agency to ensure timely implementation and pledged Government’s commitment to meet the counterpart obligations as well as ensuring compliance with safeguard requirements.

The highway project will cost $192m, with AfDB lending $151m. Mauritius plans state-of-the-art “cyber-city” in Ghana. Mauritius, a stable and relatively wealthy African island nation, has announced plans to fund a “cyber-city” in Ghana to attract investment and “high-calibre professionals” to the country. The idea was announced by Vishnu Lutchmeenaraidoo, Mauritius’ minister for foreign affairs, during a visit to Ghana last week. He said the project would be sited in Dawa, on the western outskirts of Accra, assuming it was approved by Ghana’s President Akufo-Addo (pictured), who won last month’s general election. In the country to attend the inauguration of the president-elect, Lutchmeenaraidoo said the development would have “innovation towers, conference centres, finance towers, an ICT plaza and serviced plots for regional headquarters for ICT companies”.

Three Western Cape wine companies are on a mission to increase the volumes of the South African wine exports to Mozambique. Thandi Wines, La Rid Mal and Bayede Marketing are part of the 25 businesses that will be showcasing their products and services at the the Maputo International Trade Fair, commonly known as FACIM, which is currently taking place (from 29 August - 4 September 2016.)

FACIM is a popular international multi-sectoral trade fair held annually to showcase Mozambique as an attractive destination for trade and investment.Last year the trade fair attracted 680 foreign companies from 31 countries. The participation of the companies in the exhibition is funded by the Department of Trade and Industry (the dti) through its Export Marketing and Investment Assistance Scheme. Egypt, Djibouti should enhance economic cooperation: President Sisi. Egypt’s President Abdel-Fattah El-Sisi and his Djiboutian counterpart Ismail Omar Guelleh stressed the importance of enhancing economic and trade cooperation at a Monday press conference in Cairo that preceded the signing of memorandums of understanding between the two countries El-Sisi said that his meeting with Guelleh saw fruitful talks on ways of boosting the special ties between the two countries. El-Sisi also said that the two leaders agreed on increasing Egyptian companies’ activities in different fields in Djibouti, including energy, construction and medicine, as well as boosting cooperation and an exchange of experience between Egypt’s Suez Canal Authority and the Port of Djibouti.

Egypt and Djibouti have signed seven memorandums of understanding in the fields of exports and imports, agriculture, technical education, trade cooperation, international cooperation, health and maritime ports. Djibouti also hosts US, French and Japanese military bases. Theconversation. Africa is moving towards crystallising an ambitious integration agenda of establishing a continental free trade area by October. This comes against a backdrop of an apparent trend away from mega-regional trade agreements in both Europe and the US. African leaders appear to be undaunted by this. Their commitment to a continental-wide free trade area was firmed up in Addis Ababa in November 2016. Ministers and negotiators from the 54 members of the African Union (AU) held their fourth round of negotiations for establishing the free trade area. There is a huge amount to be gained from a free trade area for Africa.

If well designed and implemented, a free trade area for the continent could change this. Nigeria Willing to Partner with Morocco in Renewable Energies- Nigerian Paper. Nigeria is poised to partner with Morocco to boost its energy security through developing solar energy, said Nigerian Today paper. “Nigeria is pursuing international partnership with Morocco to create collaborative platform for increased deployment of solar energy technologies to enhance security and sustainable development,” said the Nigerian paper. Today quotes Nigeria’s environment minister, Amina Mohammed as saying that her country is willing to encourage the promotion of renewable energy solutions. The partnership with Morocco which hosts the world’s largest solar plant, will help Nigeria promote “investment in solar power projects in several rural villages to improve education, water supply, health, agriculture, commerce, security and all these would offer opportunities to women.”

East Africa: Uganda, Egypt Strike Deal On River Nile. Photo: Stephen Otage/Daily Monitor Relations. The President of Egypt Abdel Fattah al-Sisi, (centre left), accompanied President Museveni, (centre right), on his arrival at State House in Entebbe. Tanzania to Import Electricity from Ethiopia by 2019. Tanzanian power utility disclosed that it anticipates to start importing electricity from Ethiopia by 2019. Commenting on the matter, Tanzania Electricity Supply Co., Managing Director Felichesmi Mramba, said before contractors start work on a final link to Kenya, transmission line which links the central town of Iringa to Shinyanga, in the North of Tanzania, would be completed. He added the connection to Kenya would be completed by 2018. Maroc : Les IDE filent vers le Sud.