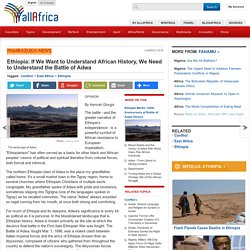 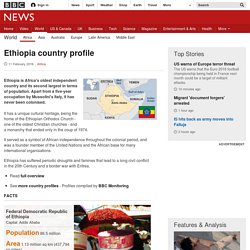 Apart from a five-year occupation by Mussolini's Italy, it has never been colonised. It has a unique cultural heritage, being the home of the Ethiopian Orthodox Church - one of the oldest Christian churches - and a monarchy that ended only in the coup of 1974. It served as a symbol of African independence throughout the colonial period, and was a founder member of the United Nations and the African base for many international organisations. Ethiopia has suffered periodic droughts and famines that lead to a long civil conflict in the 20th Century and a border war with Eritrea. 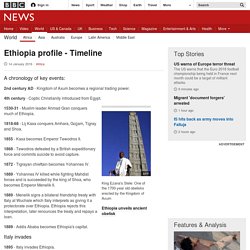 Assumptions and Interpretations of Ethiopian History (Part I) at Tadias Magazine. Ethiopia is facing a devastating drought, and food aid may soon run out. To address the shortage of drinking water, the government rents distribution trucks to provide water to various remote areas in the Oromia region. 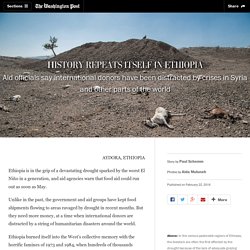 Three times a week, the truck dispenses water by digging a hole in the ground, placing a plastic covering and creating a small pond for residents to fill their containers. | A man carries his portion of rationing of wheat for his family. Each day, about 900 households are provided wheat, oil and split peas for a month to support their food needs. The suffering may be evident sooner than that, according to the World Food Program (WFP), one of the major providers of the food rations being handed out to patiently waiting people at centers across the country. The agency estimates that unless new money comes in by the end of February, those centers will stop providing the monthly ration by May, and at that point the real disaster will occur. “There was no rain, no pastures. Ethiopia attack: 200 people dead, 100 children missing - AJE News. The death toll from a raid carried out by attackers from South Sudan in western Ethiopia has risen to 208 people, an Ethiopian official said, adding that 108 children were kidnapped. 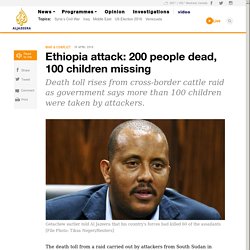 By Sunday afternoon, the number had risen to "208 dead and 75 people wounded" from a figure of 140 a day earlier, government spokesman Getachew Reda told the Reuters news agency. Women and children were among the dead, he said, adding that the assailants had also taken 2,000 head of livestock. "Ethiopian Defence Forces are taking measures. They are closing in on the attackers," Getachew said. The attack happened on Friday in the Horn of Africa nation's Gambela region which, alongside a neighbouring province, hosts more than 284,000 South Sudanese refugees who have fled a conflict in that country. Louis Proyect, From the Solomonic dynasties to the Battle of Adwa. By way of introducing these series of posts on Ethiopia, I must state at the outset that they are offered not as definitive versions of what took place historically, but more in the spirit of an open notebook. 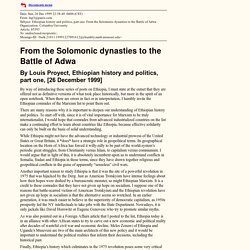 When there are errors in fact or in interpretation, I humbly invite the Ethiopian comrades of the Marxism list to point them out. There are many reasons why it is important to deepen our understanding of Ethiopian history and politics. To start off with, since it is of vital importance for Marxism to be truly internationalist, I would hope that comrades from advanced industrialized countries on the list make a continuing effort to learn about countries like Ethiopia, because effective solidarity can only be built on the basis of solid understanding. While Ethiopia might not have the advanced technology or industrial prowess of the United States or Great Britain, it *does* have a strategic role in geopolitical terms. 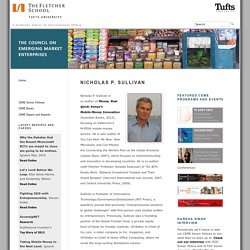 Sullivan is co-author of Money, Real Quick: Kenya’s Mobile-Money Innovation (Guardian Books, 2012), focusing on Safaricom’s M-PESA mobile-money service. He is also author of You Can Hear Me Now: How Microloans and Cell Phones Are Connecting the World’s Poor to the Global Economy (Jossey-Bass, 2007), which focuses on entrepreneurship and innovation in developing countries. He is co-author (with Fletcher Professor Jeswald Salacuse) of “Do BITs Really Work: Bilateral Investment Treaties and Their Grand Bargain” (Harvard International Law Journal, 2007, and Oxford University Press, 2009). Nigeria election: Jonathan and Buhari set fresh tone with peaceful concession.

Lagos, Nigeria — In his first public speech since winning the presidency, President-Elect Muhammadu Buhari asked Nigerians on Wednesday to begin to “heal wounds” as they enter the transition process. 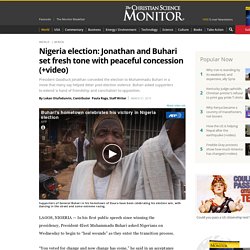 “You voted for change and now change has come,” he said in an acceptance speech at his party’s headquarters in Abuja. President Goodluck Jonathan called Mr. Buhari to concede defeat before the final announcement on Tuesday, a move that likely circumvented post-election violence. In a statement, he affirmed that “nobody’s ambition is worth the blood of any Nigerian.”

Buhari will be sworn in on May 29. AAAH. Farrellworldcultures - African Resource Wars. Preface: The Congo is one of the most mineral rich areas in all of Africa, however the governments in the region are anything but stable. 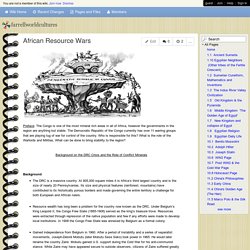 The Democratic Republic of the Congo currently has over 11 warring groups that are playing tug of war for control of the country. Who is responsible for this? What is the role of the Warlords and Militias, What can be done to bring stability to the region? Background on the DRC Crisis and the Role of Conflict MineralsBackgroundThe DRC is a massive country. At 905,000 square miles it is Africa’s third largest country and is the size of nearly 20 Pennsylvanias. We seek to answer these questions with the links below.Youtube Video: 4 Minute History lesson on what's been going on in Congo.BBC Article on the Democratic Republic of the Congo.

Other Articles & Handouts on the Congo Crisis: DRC Webquest Activity. Download, print out, fill out the questions and then discuss. Congo Links. 13.02.01: Moving Beyond "Huh?": Ambiguity in Heart of Darkness. Other Web Resources - Heart of Darkness Teacher Guide. AAAH. Mapping History.