Togo. Togo i/ˈtoʊɡoʊ/, officially the Togolese Republic (French: République Togolaise), is a country in West Africa bordered by Ghana to the west, Benin to the east and Burkina Faso to the north. 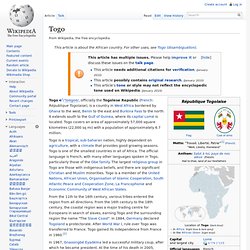 It extends south to the Gulf of Guinea, where its capital Lomé is located. Togo covers an area of approximately 57,000 square kilometres (22,000 sq mi) with a population of approximately 6.7 million. Togo is a tropical, sub-Saharan nation, highly dependent on agriculture, with a climate that provides good growing seasons. Sierra Leone. Sierra Leone ( i/sɪˈɛərə lɪˈoʊni, -lɪˈoʊn/),[4] officially the Republic of Sierra Leone, is a country in West Africa that is bordered by Guinea to the northeast, Liberia to the southeast, and the Atlantic Ocean to the southwest. 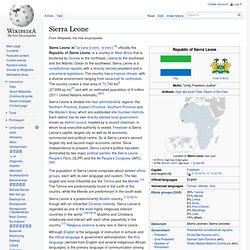 Sierra Leone is a constitutional republic with a directly elected president and a unicameral legislature. The country has a tropical climate, with a diverse environment ranging from savannah to rainforests. The country covers a total area of 71,740 km2 (27,699 sq mi)[5] and with an estimated population of 6 million (2011 United Nations estimate).[6][7] The population of Sierra Leone comprises about sixteen ethnic groups, each with its own language and custom. Sierra Leone is a predominantly Muslim country,[11][12][13] though with an influential Christian minority. Sierra Leone has relied on mining, especially diamonds, for its economic base. History[edit] Early history[edit] An 1835 illustration of liberated Africans arriving in Sierra Leone. 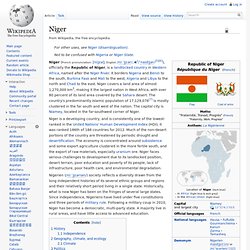 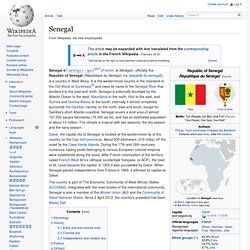 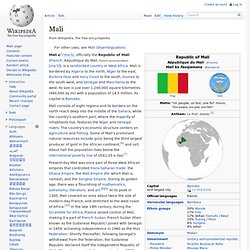 Liberia. Liberia i/laɪˈbɪəriə/, officially the Republic of Liberia, is a country in West Africa bordered by Sierra Leone to its west, Guinea to its north and Ivory Coast to its east. 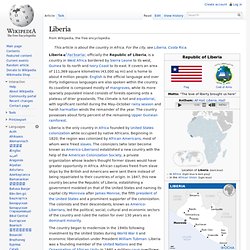 It covers an area of 111,369 square kilometres (43,000 sq mi) and is home to about 4 million people. English is the official language and over thirty indigenous languages are also spoken within the country. Its coastline is composed mostly of mangroves, while its more sparsely populated inland consists of forests opening onto a plateau of drier grasslands. Ivory Coast. Ivory Coast ( i/ˌaɪvəri ˈkoʊst/) or Côte d'Ivoire ( i/ˌkʊt dɨˈvwɑr/; French: [kot divwaʁ] ( )), officially the Republic of Côte d'Ivoire (French: République de Côte d'Ivoire), is a country in West Africa. 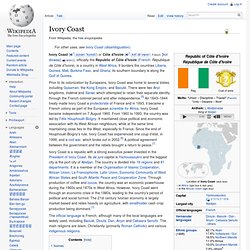 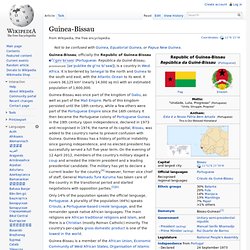 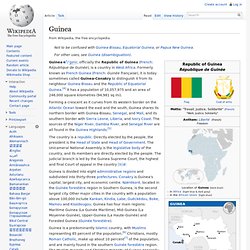 Formerly known as French Guinea (French: Guinée française), it is today sometimes called Guinea-Conakry to distinguish it from its neighbour Guinea-Bissau and the Republic of Equatorial Guinea.[4] It has a population of 10,057,975 and an area of 246,000 square kilometres (94,981 sq mi). Ghana. Ghana ( i/ˈɡɑːnə/), officially called the Republic of Ghana, is a sovereign state and unitary presidential constitutional republic, located along the Gulf of Guinea and Atlantic Ocean, in West Africa. 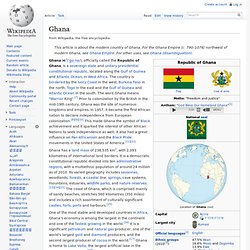 The country is bordered by the Ivory Coast in the west, Burkina Faso in the north, Togo in the east and the Gulf of Guinea and Atlantic Ocean in the south. The word Ghana means "Warrior King".[7] Prior to colonization by the British in the mid-19th century, Ghana was the site of numerous kingdoms and empires. In 1957, it became the first African nation to declare independence from European colonization.[8][9][10] This made Ghana the symbol of Black achievement and it sparked the interest of other African Nations to seek independence as well; it also had a great influence on Pan-Africanism and the Black Pride movements in the United States of America.[11][12] Name and etymology[edit] History[edit] Osagyefo Dr.

Government[edit] The Gambia. The Gambia (the i/ˈɡæmbiə/; officially the Republic of the Gambia) is a country in West Africa. It is surrounded by Senegal, apart from a short strip of Atlantic coastline at its western end. Cape Verde. Cape Verde i/ˌkeɪp ˈvɜrd/ (Portuguese: Cabo Verde, pronounced: [ˈkabu ˈveɾdɨ]), officially the Republic of Cabo Verde,[4] is an island country spanning an archipelago of 10 volcanic islands in the central Atlantic Ocean. Located 570 kilometres (350 miles) off the coast of Western Africa, the islands cover a combined area of slightly over 4,000 square kilometres (1,500 sq mi). Three (Sal, Boa Vista and Maio) are fairly flat, sandy and dry; the others generally rockier with more vegetation.

Historically, the name "Cape Verde" has been used in English for the archipelago and, since independence, for the country. In 2013, the Cape Verdean government determined that the Portuguese designation "Cabo Verde" would henceforth be used for official purposes, such as at the United Nations, even in English contexts. Portuguese explorers discovered and colonized the previously uninhabited islands in the 15th century. Burkina Faso. Burkina Faso ( i/bərˌkiːnə ˈfɑːsoʊ/ bər-KEE-nə FAH-soh; French: [buʁkina faso]), also known by its short-form name Burkina, is a landlocked country in West Africa around 274,200 square kilometres (105,900 sq mi) in size. It is surrounded by six countries: Mali to the north; Niger to the east; Benin to the southeast; Togo and Ghana to the south; and Ivory Coast to the southwest. Its capital is Ouagadougou. In 2010, its population was estimated at just under 15.75 million.[1] Formerly called the Republic of Upper Volta, the country was renamed "Burkina Faso" on 4 August 1984 by then-President Thomas Sankara, using a word from each of the country's two major native languages, Mòoré and Dioula.

Between 14,000 and 5000 BC, Burkina Faso was populated by hunter-gatherers in the country's northwestern region. After gaining independence from France in 1960, the country underwent many governmental changes. History[edit] Benin. Benin (/bɨˈnɪn/; French: Bénin, formerly Dahomey), officially the Republic of Benin (French: République du Bénin), is a country in West Africa. It is bordered by Togo to the west, by Nigeria to the east and by Burkina Faso and Niger to the north. A majority of the population live on its small southern coastline on the Bight of Benin, part of the Gulf of Guinea in the northernmost tropical portion of the Atlantic Ocean.[3] The capital of Benin is Porto-Novo, but the seat of government is in Cotonou, the country's largest city and economic capital.

Benin covers an area of approximately 115,000 square kilometers (42,000 sq mi), with a population of approximately 9.98 million. Benin is a tropical, sub-Saharan nation, highly dependent on agriculture, with substantial employment and income arising from subsistence farming.[4] West Africa. West Africa. West Africa, also called Western Africa and the West of Africa, is the westernmost region of the African continent. In line with the current membership of the Economic Community of West African States (ECOWAS), West Africa has been defined in Africa as including the sixteen countries of Benin, Burkina Faso, Cape Verde, Gambia, Ghana, Guinea, Guinea-Bissau, Ivory Coast, Liberia, Mali, Mauritania, Niger, Nigeria, Senegal, Sierra Leone and Togo.[1] Area[edit] In the United Nations scheme of African regions, the region includes 16 countries and one overseas territory:[2] Countries[edit]