Odyssey Online: Africa. The Oriental Institute of the University of Chicago. Nubia was home to some of Africa’s earliest kingdoms. 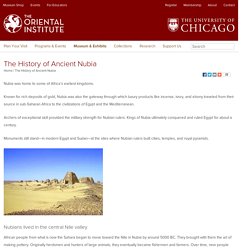 Known for rich deposits of gold, Nubia was also the gateway through which luxury products like incense, ivory, and ebony traveled from their source in sub-Saharan Africa to the civilizations of Egypt and the Mediterranean. Archers of exceptional skill provided the military strength for Nubian rulers. Kings of Nubia ultimately conquered and ruled Egypt for about a century. Monuments still stand—in modern Egypt and Sudan—at the sites where Nubian rulers built cities, temples, and royal pyramids. Black Pharaohs. In the year 730 B.C., a man by the name of Piye decided the only way to save Egypt from itself was to invade it. 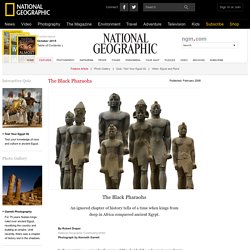 Things would get bloody before the salvation came. “Harness the best steeds of your stable,” he ordered his commanders. The magnificent civilization that had built the great pyramids had lost its way, torn apart by petty warlords. For two decades Piye had ruled over his own kingdom in Nubia, a swath of Africa located mostly in present-day Sudan. But he considered himself the true ruler of Egypt as well, the rightful heir to the spiritual traditions practiced by pharaohs such as Ramses II and Thutmose III.

North on the Nile River his soldiers sailed. Ancient region, Africa. Nubia, NubiaEncyclopædia Britannica, Inc.ancient region in northeastern Africa, extending approximately from the Nile River valley (near the first cataract in Upper Egypt) eastward to the shores of the Red Sea, southward to about Khartoum (in what is now Sudan), and westward to the Libyan Desert. 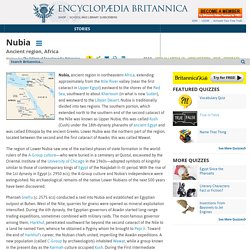 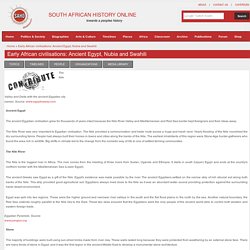 Source: www.egyptmyway.com Ancient Egypt The ancient Egyptian civilisation grew for thousands of years intact because the Nile River Valley and Mediterranean and Red Sea border kept foreigners and their ideas away. The Nile River was very important to Egyptian civilisation. The Nile provided a communication and trade route across a huge and harsh land. Ancient Africa for Kids: Kingdom of Kush (Nubia) History >> Ancient Africa The Kingdom of Kush was an ancient civilization in Africa. 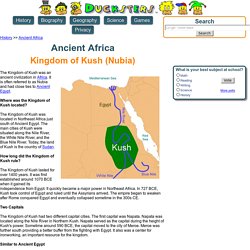 It is often referred to as Nubia and had close ties to Ancient Egypt. Where was the Kingdom of Kush located? Nubia: Ancient Kingdoms of Africa. Statue of King Senkamanisken Granite gneiss, Gebel Barkal, 640–620 bc (Napatan Period, reign of Senkamanisken). 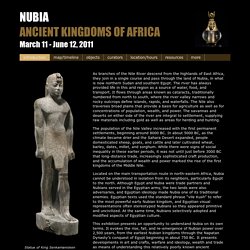 It flows through areas known as cataracts, traditionally numbered from north to south, where the river valley narrows and rocky outcrops define islands, rapids, and waterfalls. The Nile also traverses broad plains that provide a basis for agriculture as well as for concentrations of population, wealth, and power. Wonders of the African World - Episodes - Black Kingdoms of the Nile - Retellings. Greek traditions told of Memnon, a legendary Nubian king who had fought in the Trojan War; they spoke of Nubia's people, who were the "tallest and handsomest on earth," and whose piety was so great that the gods preferred their offerings to those of all other men. 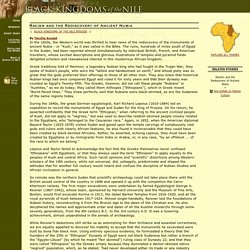 They also knew that historical Nubian kings had once conquered Egypt and ruled it for sixty years and that their dynasty was counted as Egypt's Twenty-fifth. The Greeks, however, did not call these people "Nubians" or "Kushites," as we do today; they called them Aithiopes ("Ethiopians"), which in Greek meant "Burnt-Faced Ones. " They knew perfectly well that Nubians were black-skinned, as are the Sudanese of the same regions today. During the 1840s, the great German egyptologist, Karl Richard Lepsius (1810-1884) led an expedition to record the monuments of Egypt and Sudan for the King of Prussia. This was Reisner at his worst.