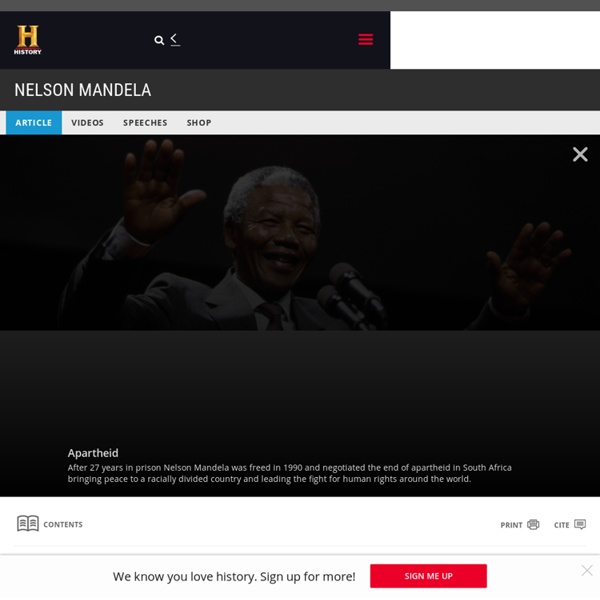 Robben Island For nearly 400 years, Robben Island, about 12 kilometres from Cape Town, was a place of exile where rulers sent those they regarded as outcasts and troublemakers. Robben Island was used at various times between the 17th and 20th centuries as a prison, a hospital for socially unacceptable groups and a military base. Its buildings, particularly those of the late 20th century such as the maximum security prison for political prisoners, witness the triumph of democracy and freedom over oppression and racism. The author Lawrence Green described Robben Island as "The Island of Exiles". MuseumSince 1997 Robben Island has been a museum acting as a focal point of South African heritage. In 1999 the island was declared a World Heritage Site. During the apartheid years Robben Island was used to isolate opponents of apartheid and to crush their morale. The IslandOn the road to the village you'll pass a square-towered church and old Sailboat cannons.

Nelson Mandela - Biography - President (non-U.S.), Writer, Civil Rights Activist Nelson Mandela became the first black president of South Africa in 1994, serving until 1999. A symbol of global peacemaking, he won the Nobel Peace Prize in 1993. Synopsis Nelson Mandela was born on July 18, 1918, in Mveso, Transkei, South Africa. Becoming actively involved in the anti-apartheid movement in his 20s, Mandela joined the African National Congress in 1942. Early Life Nelson Mandela was born Rolihlahla Mandela on July 18, 1918, in the tiny village of Mvezo, on the banks of the Mbashe River in Transkei, South Africa. Nelson Mandela's father, who was destined to be a chief, served as a counselor to tribal chiefs for several years, but lost both his title and fortune over a dispute with the local colonial magistrate. At the suggestion of one of his father's friends, Mandela was baptized in the Methodist Church. When Mandela was 9 years old, his father died of lung disease, causing his life to change dramatically. Mandela's Imprisonment Prison Release and Presidency In Recent Years

South Africa Map / Geography of South Africa / Map of South Africa Archeologists report evidence that humans have inhabited Southern Africa for more than 100,000 years. Over many modern centuries assorted African tribes moved steadily south to populate the country we now call South Africa. Bantu peoples began migrating across sub-Saharan Africa from the Niger River Delta around 2,500 years ago, and arrived in South Africa in small waves setting up small villages. By 1200 AD a trade network emerged, and the premise of a sacred leadership took hold. Then, in 1487, Bartolomeu Dias, a Portuguese explorer, became the first European to land in southern Africa. However, it wasn't until 1652, a century and a half after the discovery of the Cape Sea Route, that the Dutch East India Company founded a station at what would later become Cape Town. The Dutch used the port primarily to transport slaves from India, Indonesia and Madagascar to be used as laborers for the colonists. Since the end of apartheid, unemployment has been very high.